The creation of new markets, transportation networks, packaging and labeling, training and knowledge sharing are some of the methodologies being used by the New Guyana Marketing Corporation (GMC) to assist farmers countrywide.

Multi-stakeholder partnerships remains an essential component in the survival of the non-traditional sector and it in this light, the Guyana Marketing Corporation today held a Stakeholder Networking Forum at the Regency Hotel, Hadfield Street.

The forum which is a collaborative effort with the World University Service of Canada, Caribbean (WUSC), was held under the theme, “Creating Linkages for Development and Expansion of Markets Opportunities for Local Producers.” 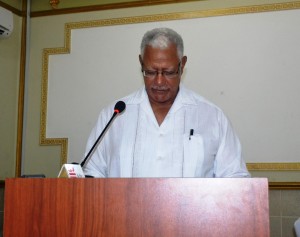 Agriculture Minister, Noel Holder while delivering the feature address at the opening ceremony

Agriculture Minister, Noel Holder, in delivering remarks underscored the importance of creating linkages as Government positions itself to further strengthen the agriculture and marketing sectors.

In 2015 alone, Guyana’s export earnings amounted to $80B, of which, Non-traditional crops alone attracted approximately $2B.

“It is therefore noteworthy, to push the advancement of the sector, as a large part of Guyana’s economy is driven mainly by the marketing of agricultural produce both regionally and internationally,” the Minister said.

In the recent years, Guyana has been shifting its focus from the production of just traditional crops such as rice and sugar to the incorporation of the non- traditional sectors which has an equally viable market.

In an attempt to establish markets in non-traditional agricultural produce, the Minister of Agriculture has position itself to become a prominent stakeholder in the agro-processing industry.

“Creating a sustainable agricultural development path means improving the quality of life in rural areas, ensuring enough food for present and future generations and generating sufficient income for our farmers, exporters and agro-processors,” the Minister said.

The subject Minister, echoed a called for more businesses to engage at the regional and international levels, giving Guyana’s recent movement on the World Bank’s Ease of Doing Business Index. 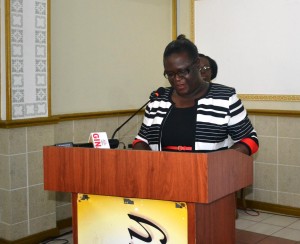 General Manager, Guyana Market Corporation, Ms. Ida Sealey- Adams called on the key players in the industry to work together, adding that for a linkages to be created it is necessary for collaboration.

“Fostering stronger network remain an important part of our work at the Guyana Market Corporation as it is major component to strengthening the sector. Small players are also important and the GMC this year will be pushing for further involvement of the small farmers in the industry,” she said. 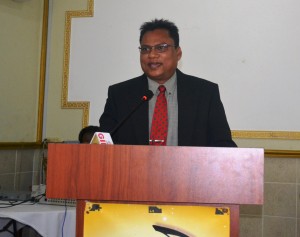 Today’s event is part of a $20M project investment by the Government of Canada through the Promotion of Regional Opportunities for Produce through Enterprises and Linkages (PROPEL) project.

Persaud called on the GMC to work with farmers in breaking the cycle by ensuring a more level playing field whereby all players (small, medium and large) can easily access market available regionally and internationally.

“While there needs to be a strong private sector, the linkage along the value chain remains critical as we seek to advance agriculture in Guyana,” Persaud said. 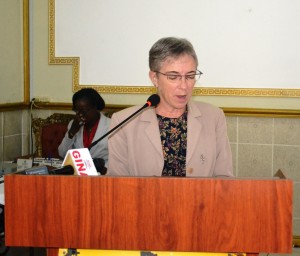 Counsellor, Development Cooperation, Ms.  Jan Shelingo maintained that stakeholder involvement remains paramount to the sectors development and urged the agro-processors to use the opportunity wisely to have issues which affect the trade ironed out.

Government has been taking measures to become a prominent stakeholder in the agro-processing industry and in 2014 an Agro-processing forum was held to address some of the issues affecting the industry. The success of the event promoted the Minister to organize an Export Facilitation Workshop which addressed market led opportunities and formulated ways in which the Guyana Marketing Corporation can work together to link buyers to market.

Caribbean Containers’ display at the forum

Some locally produced commodities on display