The Pesticide and Toxic Chemicals Control Board (PTCCB) is observing its annual pesticides awareness week, October 23 to 29 with a series of activities under the theme “Manage Pesticides Responsibly: adapt to Climate Change”.

Key highlights of the week of activities include the launch of a national programme that will see the erection of 10 billboards across Guyana. These billboards will have emblazoned on both sides with messages relative to safe handling of pesticides and related issues. 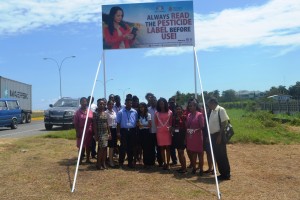 Staff of the PTCCB infront of the newly erected billboard

The launch took place today, Monday October 24, 2016 with the first billboard being erected on the southern corner of the Turkeyen Main Road, East Coast Demerara.

Chairman of the Pesticide and Toxic Chemicals Control Board, Dr. Leslie Munroe, said that the Board decided to erect billboards around the country to educate persons on the responsible management of pesticides and toxic chemicals. “Pesticides are used by almost everyone. This initiative aims to get the message across that pesticides are most effective if used properly, but we must not stray away from the fact that they are hazardous if used incorrectly.” Dr. Munroe said.

The Board and by extension the Ministry of Agriculture, recognizes the need for proper management of pests such as insects and rodents in order to preserve human health and wellness in addition to ensuring the livelihood of  farmers, by protecting  their crops from attacks and infestation by pest.

Registrar of the Pesticide and Toxic Chemicals Control Board, Mrs. Trecia David Garnath said that one of the key functions of the Board is to ensure enough information is disseminated to the general public on pesticides and the hazards they pose to human health and the environment.

“One of the key mandates of the Board is public awareness. This year we are celebrating Pesticide Awareness Week throughout the region and one of the activities we are having as part of our initiative is expanding our public awareness. The messages on the billboard were designed to let people know what they need to familiarize themselves with and what they should be careful of in terms of managing the use of pesticides and toxic chemicals.” Mrs. Garnath said. 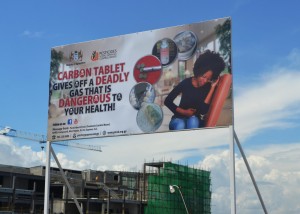 The billboard that was erected

Agriculture Minister, Noel Holder, in an invited comment said that Pesticide Awareness Week is geared to improve the management of pesticides not only in Guyana but also in other Caribbean countries.

“Many adverse effects of pesticides can be prevented through responsible use. Regulatory framework for the management of pesticides is essential in order to set minimum standards for their sound management; however, this cannot replace the education of pesticide users. Responsible use and recommended application rates limit potential pesticide residues in crops and the environment. These also help avoid pest resurgence, resistance and reduce impacts to human health.” Minister Holder said

Over the coming days the board will also host a graduation ceremony for pest control operators, and the finals of national secondary schools pesticide awareness competition.