“Coconut festival seen as a great opportunity to boost promotion of the Coconut Industry…”Agriculture Minister, as Coconut Festival get on the way in Charity.

The Ministry of Agriculture, in collaboration with the Ministry of Business, Department of Tourism and the Essequibo Chamber of Commerce, today hosted one of the first activities of Guyana’s first Coconut Festival. As part of river appreciation, the Chamber hosted a river parade and exhibition at the Charity Market Square, which saw several organisations, mostly agro-processors, and patrons taking part.

Given the potential the industry has to grow and seeing the significance of such an event, the Ministry of Agriculture contributed over $5,000,000 to the Coconut Festival, which played an integral part in laying the foundation for the festival in Guyana. 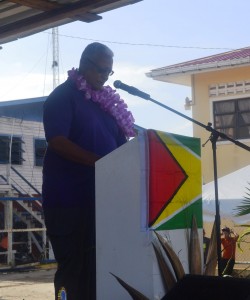 During his feature address, Agriculture Minister, Noel Holder expressed delight to be collaborating with the Ministry of Business, Department of Tourism, to host Guyana’s first Coconut Festival. “Coconuts are Guyana’s main non-traditional crops. It ranks third after rice and sugar in acreage cultivated and generates an annual income of US $4.6M. This festival is a great opportunity to boost promotion of the coconut industry and its wide products including coconut water, virgin coconut oil, etc.” Minister Holder said. 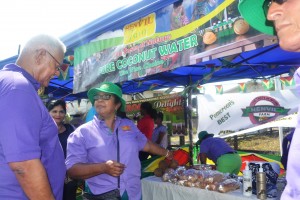 Minister Holder chats with one of the agro-processors at that had coconut products on display .

Coconuts are the main crop coming out of the Pomeroon region, with farmers cultivating over five varieties of this diverse crop. The National Agriculture Research and Extension Institute (NAREI) is working to increase coconut productivity and production potential through rehabilitation and expansion of Guyana’s coconut production base. NAREI also continues to advocate for good agronomic practices, effective pest and disease management and better access to planting material.

Additionally, the New Guyana Marketing Corporation (New GMC) continues to collaborate with processors to further develop value added products of coconuts while strengthening the value chain for products to facilitate linkages that will increase market demand. 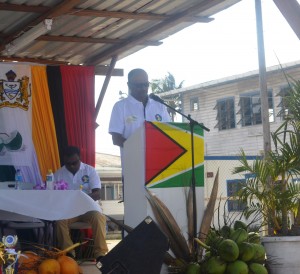 President of the Essequibo Chamber of Commerce, Mr.Deleep Singh 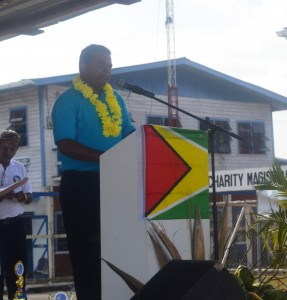 Also speaking at the proceedings, Region two Regional Chairman, Mr. Devanand Ramdatt, noted that this was a historic day for Charity. “The coconut industry is one of the most important industries in the region and I am sure that you all will agree that many more activities that can benefit the region is needed.” Mr. Ramdatt said.

The Ministry of Agriculture featured prominently at this event, having most of the agricultural agencies demonstrating their direct or indirect link to the coconut industry. The Guyana Rice Development Board (GRDB) came on board displaying the different ways coconut products and dishes can be tied to rice. The National Drainage and Irrigation Authority (NDIA) provided detailed information of the importance of proper drainage and irrigation when cultivating coconuts. The Guyana School of Agriculture (GSA) had on display an array of products made from coconuts that were produced by the school. The New Guyana Marketing Corporation (New GMC), being the main facilitator of agro-processing in Guyana, had on sale a number of coconut bi-products that were produced locally. Other booths had several agro-processing groups and coconut bi-product producers displaying their products.

While offering apologies for the absence of Prime Minister, Moses Nagamootoo and Minister of Business, Dominic Gaskin, Minister Holder urged Guyanese to reclaim the name of “Bread Basket of the Caribbean.” “We have started and will persist in increasing our agricultural production and exports, with coconuts playing an increasingly important part in this process.” Minister Holder said.

One of the Ministry of Agriculture’s main focuses is to push agriculture production towards more value added products. The Pomeroon area is seen as a critical element in the next phase in the government’s agricultural development effort.