Today the Ambassador of the Russian Federation Mr Nikolay D. Smirnov paid a courtesy call to the Minister of Agriculture Noel Holder during which he presented several Poui trees in keeping with the National Tree Day initiative and Government’s efforts to make Guyana green again. 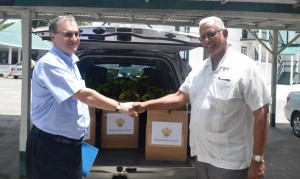 A total of 15 plants were presented to Minister Holder which he plans to distribute to various communities across the city.

In an invited comment Minister Holder expressed his gratitude to the ambassador, and by extension, government of Russia for the kind gesture. “This gesture, though it may seem small, will have a great impact in Guyana’s efforts sustain our green economy. This shows that Guyana is being supported by other nations in our efforts to combat the effects of climate change through planting trees.”

Ambassador Smirnov expressed great regret for not being able to attend the National Tree Day activity which was held on Saturday October 1, at Iwokrama in Region 8. “I am sure that the ministry will engage in planting these trees in public spaces around Georgetown to make the capital more green and beautiful.” Ambassador Smirnov said.

Minister Holder plan to conduct tree planting exercises during the course of Agriculture month where he will be planting these trees around the city. He will also be sphere-heading several maintenance exercises to ensure that trees planted are given the opportunity to grow and last for generations.