In keeping with Agriculture month activities the Inter-American Institute for Cooperation on Agriculture (IICA) hosted a three day risk mapping workshop in the Ministry of Agriculture’s boardroom. The workshop commenced on Monday and saw delegations from Guyana, Canada and Suriname taking part. During the workshop several key areas were discussed as to how these countries can be prepared for several risks and disasters that affect agriculture in Guyana and Suriname.

A section of the participants during IICA’s Risk Mapping Workshop

While overviewing the discussions of the workshop, President of DE Design and Environment Inc. in Canada Mr David Nicholas Oswald noted that the turnout was more than anticipated. “The participants were incredibly engaged and a lot of good ideas came to the surface.” Mr Oswald added. 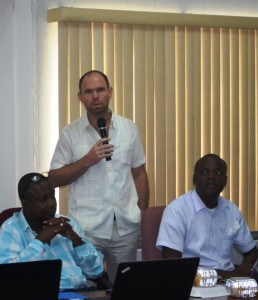 Mr, David Nicholas Oswald while giving his presentation during the workshop

Trevor Smith G.I. S specialist also of D.E Design and Environment Inc. said that “a lot of the material was quite challenging but the way the participants handled it shows that a lot of people are not interested in agriculture rick mapping, making the connections and seeing the solutions.”

During the first day of the workshop, discussions were focused on the conceptual framework of risk management, data fusion and risk mapping. Key areas identified under these concepts were agricultural risk mapping (ARM) and disaster management frameworks. 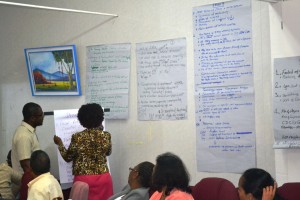 Participants during the discussion period of the workshop

The second day focused on flood and drought risk maps for Guyana and Suriname. Participants exchanged knowledge on data collection and validation and how to design agriculture risk maps based on data collected.

The final day saw the participants focusing on pest risk/ disease maps and saline Intrusion risk mapping. The discussion was centred on where the data to create these maps are found and how they can be tied into ARM.

While offering remarks, Permanent Secretary for the Ministry of Agriculture, Mr. George Jervis expressed satisfaction with the work presented during the course of the workshop. “I hope this will lead to more than an academic exercise. The challenges are there and because of the reality of those challenges, we must cater for the likely outcomes.” Mr. Jervis said.

Also offering remarks was Ms. Haidy Malone, UNDP Suriname GCCI Project Manager who expressed gratitude to IICA for inviting the Surinamese delegation to be part of the exercise. “I hope that the delegation can follow the recommendations made during the workshop.” Ms Malone added.

Going forward, the participants will be developing strategies on making efforts towards focusing down on the areas discussed, having pilot projects, engage with stakeholders and produce actual value added data product that will help cope better with environmental change and risks. 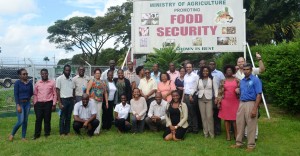