More than 800 residents and farmers on the West Bank of Demerara are benefitting from drainage and irrigation works being undertaken by the National Drainage and Irrigation Authority (NDIA). The estimated value of the works is $100 million. 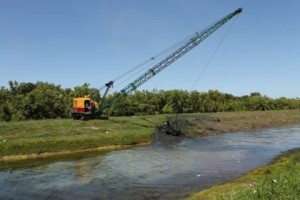 Senior engineer at the NDIA, Dave Hicks, said the Authority is working with the Regional and Neighbourhood Democratic Councils to improve drainage at Canals Number One and Two and nearby communities.

“For years, farmers have been complaining about flooding in Canals Number One and Two, so we have installed and rehabilitated some pumps. We installed an 80 cusec (cubic feet per second) mobile pump which is generally fixed and we have also constructed and installed a $120M pump station. The installation of a 200 cusec fixed pump would also increase the drainage capacity of this area,” the senior engineer told the Government Information Agency during a recent visit to the worksite. 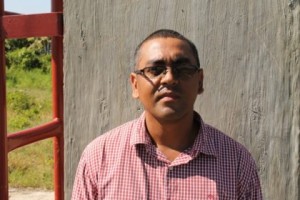 Further, Hicks said Canal Number One is also being dredged to improve its drainage capacity. Approximate 7000 acres of land are under cultivation with cash and permanent crops in the area.

“We have awarded a $6m contract to excavate the canal with a dragline and we will continue our maintainence programme which cleans the weeds on a monthly basis … at a cost of about $1.5 M per month,” Hicks said.

According to Hicks, the works on the canal should be completed shortly and the monthly maintenance which keeps the canal clear of weed will resume immediately after. Works started about four weeks ago.

The NDIA is the agency tasked with the management of the country’s drainage and irrigation systems. Its mandate includes, but is not limited to, the development of the capacity of the local organs in the region to provide relief from flooding during periods of rainfall or drought. The 2016 budgetary provisions to this agency is more than $1B.