A seven vehicle convoy lead by Agriculture Minister Hon. Noel Holder wrapped up a successful 4 day outreach to Region Nine and its sub-districts to look at the regions agricultural potential and the progress of projects implemented by the Agriculture Ministry.

In Government’s quest to diversify its agricultural production, major emphasis is being place on resuscitating agriculture- making the region self-sufficient. 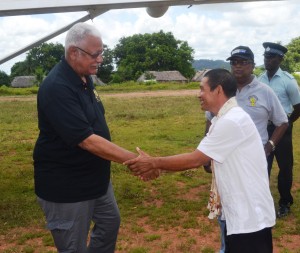 The exercise forms part of the Ministry of Agriculture’s mandate to extend the country’s agricultural base beyond the coast to the hinterland due to the adverse effects of climate change by adequately addressing some of the ills affecting not only their mode of production, but promoting the cultivation and production of non-traditional crops.

The first meeting was held at Aishalton Village in the Deep South of Rupununi where the team was met by Toshao, Douglas Casimero, and councilors of the village. 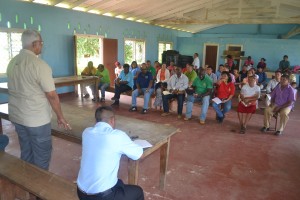 Minister Holder while speaking to farmers during a meeting in Annai, Region 9

“The government’s thrust for development in the agricultural sector over the next five years is hinged on the drive to diversify and expand production in not only traditional not non-traditional activities….Our focus is centered not only on improving the production capabilities, looking at market and scope for diversification, but to move agriculture beyond the coast to the hinterland due to the adverse effects of climate change, ” Minister Holder explained.

The region presently has tremendous potential for agricultural diversification which has gained the attention and support of Government. Region 9 is the largest region in Guyana and its savannahs based agriculture represents an enormous presence for the development and expansion for corn, soybean and cattle.

Cattle at Annai farm in Region 9

The Ministry of Agriculture in 2016, has embarked on a number of initiatives aimed to pushing agriculture in the Region. Given the topography of the Deep South Rupununi which experiences 5 months rainfall and 7 months drought-like conditions development of projects are crafted with this in mind.

Among some of the issues which were addressed centered around, financial assistance to have completed a main farm to market access bridge, distribution of pesticides, training for farmers in best practices, repair of the slaughter house and fencing of pasture to avoid damages to cash crop by cattle.

With respect to the bridge, Minister Holder pledged assistance to have the bridge completed which is expected to significantly assist farmers in having their produce moved from farm to market. The slaughter house which was built in 2010 was never officially handed over to the region and has never been utilized.

Permanent Secretary, Ministry of Agriculture Mr. George Jervis has since committed to ironing out the bottle necks to have the building repaired and officially handed over to be used by farmers shortly. The Toshao also made representation for assistance to be given to have a rice huller repaired. The huller was given to the village by an NGO.

“This pursuit by the Government to modernize agriculture in our country has already begun to produce favorable results….We will continue to work with farmers to ensure that this is realized,” the Minister said.

Permanent Secretary, Ministry of Agriculture Mr. George Jervis in addressing residents, spoke of future collaboration which will see the Ministry working with the villages in crafting a long term Agricultural Development plans for the region.

“This will look at data analysis, incorporation of pilot projects, access to market opportunities, best practices, among others….We have worked in the past with the village and will continue to lend support to ensure that Aishalton’s agricultural potential is returned,” Mr. Jervis stated.

The meeting saw residents being brought up to date as the role of extension officer in the region, scholarship opportunities, and future projects such as the model farm which will be fully operable in 2018.

Extension officers have been working round the clock to ensure that farmers receive the necessary technical advice to not only boost crop production, but to ensure that proper animal husbandry is practiced.

Residents of Sand Creek, were in high praise of efforts by the Ministry in ensuring that their livelihoods are not lost. Toshao, Eugene Andrews, in his opening remarks lauded the work of the National Agricultural and Extension Institute (NAREI) Acoushi Ant Bait program which has been a resounding success.

According to Andrews, the program which was implemented last year has significantly assisted farmers in the Region. 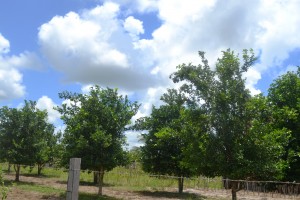 “Climate change has had a negative impact on production as we lost some of our production. However, the work of NAREI has been instrumental in ensuring that all is not lost and our agricultural production improves,” he said.

A team of Research and Extension officers will be in the region within the next two weeks to work with farmers in the various regions. NAREI has also donated plant seedlings with the aim of pushing agriculture in the region.

A team from the Guyana Livestock Development Authority (GLDA) is also scheduled to commence work with farmers and other key stakeholders in looking at ways in which Government can boost the cattle industry in the region. 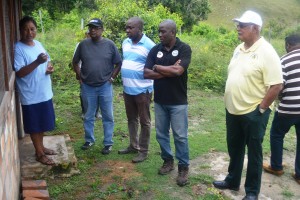 Minister Holder, PS George Jervis and NAREI CEO Dr. Homenauth in discussion with the Chairperson of the Ruperty Women’s Group during an outreach to Region 9

“Government has recognized the potential for agriculture in the region and will continue to channel resources to provide the necessary infrastructural, technical assistance and training to better equip farmers with the necessary skills to explore, and venture into, new opportunities in the agricultural sector,” Minister Holder noted.

In addition, the Ministry of Agriculture is looking at ways in which water harvesting can be realized in the region which is known for its prolonged dry period. The team paid a visit to JR Ranch to get a firsthand look at technologies being used on the farm. 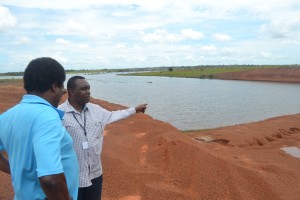 Chief Executive Officer, NDIA Mr. Fredrick Flatts and a team of engineers will commence work within the next two weeks scoping areas where water harvesting ponds will be erected. This is to cater for the irrigation needs of farmers.

“Within the next two week we will be sending two excavators in the region to commence work, after the feasibility study has been completed…This is necessary as there is now increased interest in water harvesting,” Mr. Flatts said.

Water harvesting is the collection of water during the rainy season to provide irrigation during the 7 months dry period. Water Harvesting is utilized in drought prone areas and is a directly productive form of soil and water conservation which has proven to increase both yield and reliability of production. It is considered as a rudimentary form of irrigation during dry periods. 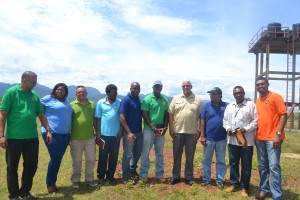