The National Agricultural Research and Extension Institute (NAREI) recently acquired over 1,000 breadfruit seedlings to increase production of the plant, locally.

The expansion in production is in keeping with government’s agenda of creating a green economy, Dr. Oudho Homenauth, NAREI’s Chief Executive Officer said. 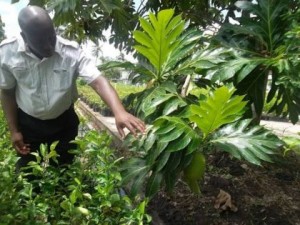 Dr. Homenauth, during an interview with the Government Information Agency (GINA), on Thursday, revealed that the Institute will be expanding its operations at Bartica, Region Seven to include at least 30 acres of breadfruit plantation. Further, seedlings would also be distributed to farmers.

Dr. Homenauth related that on Wednesday, Minister of Agriculture, Noel Holder and Permanent Secretary, George Jervis during a visit to NAREI, inspected the seedlings and were updated on the progress of the planned expansion project.

The acquisition of the different varieties of breadfruit seedlings is a direct result of a call made by President David Granger at last year’s National Tree Day in Bartica, Dr. Homenauth reflected. He noted that the President has been encouraging persons to venture into the agricultural sector to promote entrepreneurship. Breadfruit, which is consumed mostly as chips or ‘boil and fry’ by Guyanese, could be an alternative to plantain chips. There are a small number of enterprises that are processing breadfruit into flour.

According to Dr. Homenauth, in Guyana, breadfruit is grown on a small scale, mainly by farmers or residents for personal consumption. The limited availability of planting materials, access to market, land, flooding, and little knowledge on how to cultivate this crop are all factors that affect its production locally. 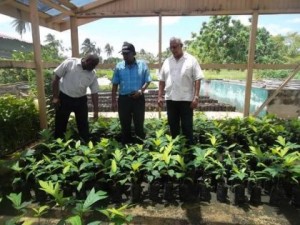 Minister of Agriculture Noel Holder along with Permanent Secretary of the Ministry of Agriculture, George Jervis and Chief Executive Officer of the National Agricultural Research and Extension Institute (NAREI), Dr Oudho Homenauth examines breadfruit seedlings during a visit to the institution.

He added that breadfruit is primarily grown in a mixed cropping system. The average age of the crop is 20 years. It is found predominantly in the Pomeroon River (Region Two); Haslington and Victoria (Region Four), No.7 and Ithaca (Region Five); Bartica (Region Seven); and Linden (Region 10).

He noted that already government in partnership with the private sector is promoting the use of breadfruit. These efforts are being made within communities, schools, and other civil bodies. These energies have resulted in the Carnegie School of Home Economics, through collaboration with the Food and Agriculture Organisation (FAO), embarking on a workshop aimed at highlighting the benefits of breadfruit.

The African Cultural and Development Association (ACDA) promoted breadfruit as a main dish at the 174th Emancipation celebration and highlighted the benefits of the said fruit, while at the Linden Town Day different dishes made from breadfruit were presented by students.

Planting materials for breadfruit are not readily available owing to the botanical characteristics of the crop and the lack of knowledge to propagate it. Currently, efforts are being made by NAREI to educate farmers and to provide planting material. 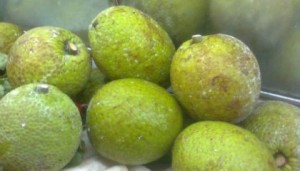 There are various advantages for farmers interested in the cultivation of breadfruit. These include an intervention by the government which will allow farmers to access planting materials and have the support of NAREI and available market due to a current demand for breadfruit locally for processing.