Several Hydromet Staff to benefit from local, over-seas training opportunities – in an effort to improve services provided by Agri. Ministry

Several persons are scheduled to begin training as part of the Ministry of Agriculture’s efforts to provide better services within the sector. An estimated 44% increase has been awarded to the Hydromet Department to add to its training budget for 2016 from the national coffers.

Later this month, Mr. Syeb Khan, a Hydrological Technician, will depart Guyana for China to pursue a Degree in Hydrology. This programme is scheduled to last for five years at the Hohai University in Nanjing, China. His studies is being sponsored by the World Meteorological Organization.

A physicist and an agronomist will also benefit from training in the United Kingdom. Mr. Esan Hamen and Ms. Danessa David will be pursing Masters’ Degrees in Applied Meteorology at the University of Reading in Berkshire, UK. These programmes are expected to last one year. 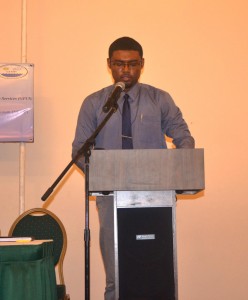 According to the Chief Hydromet Officer (ag) Dr. Garvin Cummings, the department will benefit immensity from these training opportunities.

“Upon Mr. Khan’s return he will function as a hydrologist as the department does not currently have one. The position has been vacant for almost ten years….” Dr. Cummings explained.

Upon Mr. Hamen’s return to Guyana, he will lead a Research Unit within the Department. It is expected that by the latter part of 2017, the Hydromet Department will have its Research and Development Unit fully operable.

Three of which are doing the meteorological observer course and the remaining trainee is doing the Certificate Training in Agro Meteorology which will be completed after eight months.