Agriculture Minister Hon. Noel Holder today met with representatives of the rice assessment committee of Regions 2, 3, 4, 5 and 6.  The aim of the meeting was to brief the members of their respective duties in keeping with the mandatory act of Parliament Section 69:02. 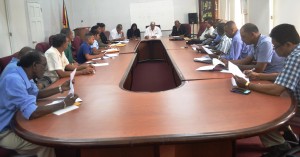 The role of the Committee is to safeguard tenants (rice) who felt they were being mistreated by landlords.

Present at the meeting was the Head of the Agriculture Project Cycle Unit, Mr. Cecil Seepersaud.

He stated that “one of the primary cornerstones of the act (Guyana Rice Producers’ Association Act) was basically if a landlord wanted to reclaim his lands from tenants there was a question of who had the greater need for the land and therefore the rice assessment committees that are in place would decide whether the landlord’s needs were more important than the tenant’s needs.”

Over the years, the dynamics of landlord-tenant arrangements have changed as there are now persons who have small scale land and are renting to farmers who would in turn transform them into large scale production.

This is due to Guyana’s rice farmers becoming more mechanised in their cultivation practices and also greater efficiencies in scale. As a result, the committees that sit to resolve issues that may arise now have to deal with issues that are a bit different.

Minister Holder encouraged each member to fully familiarise themselves with the Rice Producers’ Act so that they can responsibly and fully advise farmers and land owners on what the law stipulates as it relates to dealing with issues of such nature.

It was pointed out that the work of the committee is like the work of a court in that decisions arrived at by the committee can be appealed as both landlord and tenant have the power to appeal any decision that is not favouring to them. These appeals will then go to the full court where two judges will examine the decision, and decide whether that decision should be reversed or held as it is.

Persons with rice related matters are advised to make contact with the rice assessment committee representative in their respective regions. The Members can be contacted on Tel# 619-8807 or khanfazeela62@gmail.com.