The National Agricultural Research and Extension Institute (NAREI) is intensifying its education and awareness efforts to better inform plantain farmers about the Black Sigatoka disease. 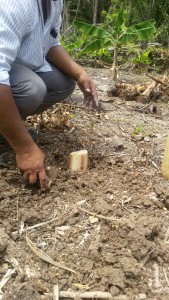 For several years the Black Sigatoka disease (caused by the fungus, Mycosphaerella fijiensism) has been affecting local plantain production. The disease strives in heat and humidity of the tropics. While, it cannot be eliminated it could be controlled with proper farming practices.

As such, NAREI has created demonstration plots in several farming communities (such as Clanbrook and Hand-en-Veldt, Region Four; Leguaan and Wakenaam, Region Three; and Golden Fleece and Queenstown, Region two) that were significantly affected by the disease. The intention is to offer farmers’ firsthand knowledge about good farming practices crucial for healthy plantain production.

This will complement earlier measures taken by NAREI. These include workshops and field training for Extension Officers and farmers and supply of chemicals. The Institutes’ efforts were supported by several partners including the Food and Agriculture Organization, Canadian Hunger Foundation (CHF), PROPEL, and Caribbean Agricultural Research & Development Institute NAREI has been able to help farmers.

The impacts of these collaborations are being felt today, with many plantain farmers being able to have better control of the Black Sigatoka disease. Currently, many farmers across the country are harvesting plantain. The abundance of plantain on the local market has caused the price to fall from $100 per pound to $60 per pound (in some areas).

Nandkishore Sanichara, a plantain farmer operating in Hangsburg and Pomeroon, Region Two, is currently harvesting between 30,000 to 40,000 pounds of plantain weekly. He has about 40 acres of land under cultivation.

“We know how to control the Black Sigatoka but during the dry period the disease was getting a little out of control…I follow the advice NAREI give…I keep watching the leaves, chop off and burn which ever leaves getting brown and I spraying the chemicals so my crops good…I harvesting nice bunch plantains,” the farmer said.

Similar observation was made by Reemal Gangadin, a plantain farmer for over 10 years. His farm is situated in Hague, West Coast Demerara. Cognizant that the complete eradication of the disease may not be possible, Ganagdin is of the view that constant monitoring is critical to winning this battle. 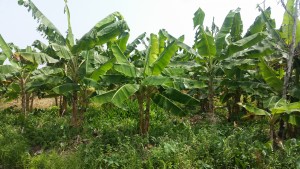 He has been zealously following directions provided by NAREI and has been reaping the results. “Since I monitoring and spraying the chemicals things have improved…I benefited from assistance provided by CHF and PROPEL…NAREI staff come around often too. Gangadin believes that the demonstration plot created in Hague will benefit the farmers greatly. “I think it’s a good idea…farmers can go and see what to do and then take it back to their farms,” he added.

NAREI is encouraging farmers to make use of the demonstration plots. The Institute is of the view that there is a nexus between proper farming practices and good yield production.