Cassava is a very important part of the Guyanese diet; it is used in soup, it is boiled and fried with yams, eddoes, and plantains and even as flour for other foods such as roti.It is also the main staple for the country’s Indigenous people, the Amerindians, and is the key ingredient for cassava cassareep and farine.

Machines are being used to cultivate and harvest cassava at NAREI’s Kairuni Horticulture Station, as part of the experiment.

NAREI’s Research Assistant, Premdat Beechamtold the Government Information Agency (GINA) that, “This equipment was brought from Brazil; we use these to do cassava planting along with fertilising. It is based on the functioning of the types. Land has to be prepared flat in order for this equipment to function properly. We have different settings which work based on our programme density.” 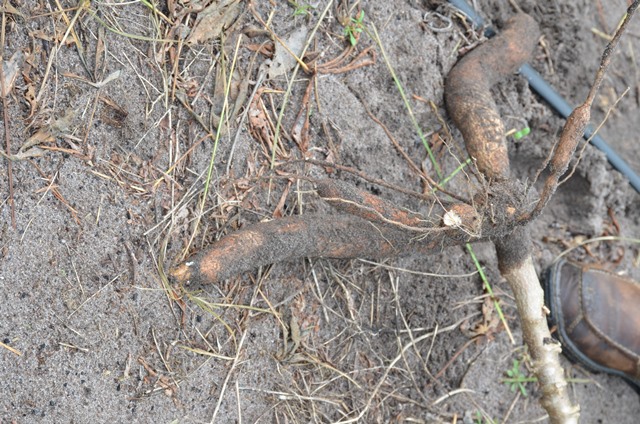 Beecham said, “If we want to achieve 10 plants per acre, of course we have to set the gears to 10 plants per acre. Of course it can go down or increase once we adjust the gears…the cassava up-rooter, is the only one of its kind in Guyana. It harvests three acres of cassava in less than an hour. It would probably take about 20 people to do this job.”

Farmers are currently being trained at the Kairuni Horticulture Station to operate the machine.  “We had two training sessions held…with farmers from Parika and Craig, these are the two main areas of cassava farming.”

He said these farmers who are accustomed to using the rig system for cultivation, took advantage of NAREI’s demonstration with the machine. He added that due to the fact that they have a labour shortage in these areas, this machine will work perfectly for the farmers.

He said the equipment is costly, so it is advisable that farmers, who are interested in purchasing them, do so in groups.  A farming group from the Parika area has indicated their willingness to use the machine.

Brazil along with many of the Latin American countries has been using this equipment for mechanical harvesting over the years.

Cassava is the third largest source of food carbohydrates in the Tropical Hemisphere. It is a major staple food in the developing world, providing a basic diet for over half a billion people.