The Guyana Government today inked a US$3M agreement to rehabilitate the Cunha Canal which is part of Guyana’s Low Carbon Development Strategy’s adaptation initiatives.  The grant to Guyana is being provided by the Norwegian Government under the Guyana REDD+ Investment Fund (GRIF), in partnership with the World Bank.

This project is an important intervention which addresses adaption to climate change. As such works will improve government’s ability to manage water resources in the East Demerara Water Conservancy (EDWC). 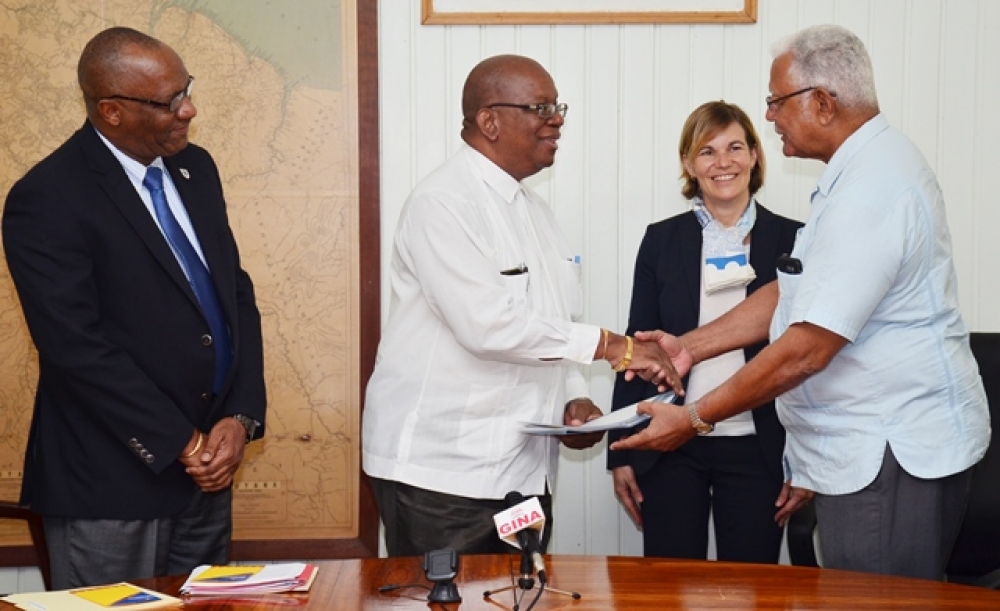 Minister of Finance Winston Jordan handing over the agreement to Minister of Agriculture, Noel Holder in the presence of Minister of State, Joseph Harmon.

The proposed physical works for the Cunha Canal will include its widening, rehabilitation of the former outlet structure, re-routing the canal to re-establish its original alignment, and construction of a bridge on the East Bank of Demerara (EBD) public road where the canal intercepts the road. Rehabilitation of the canal will increase its discharge capacity and contribute to reducing the risks of the embankment overtopping. 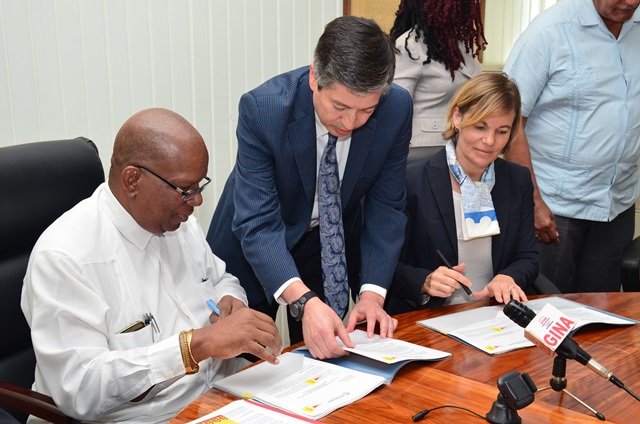 Signing on behalf of the Guyana Government, Minister of Finance Winston Jordan said that from the standpoint of his government, the project represents one small column in the way of greening the economy. Whilst all countries are susceptible to climate change in various ways, in Guyana flooding is due largely to its low-lying coast and unfortunately because of the history of its development which sees significant majority of its citizens living along the coast.

“While we look at a longer term option, we need to bring immediate relief to the citizens and businesses and property… I view this project in that context,” Minister Jordan explained. 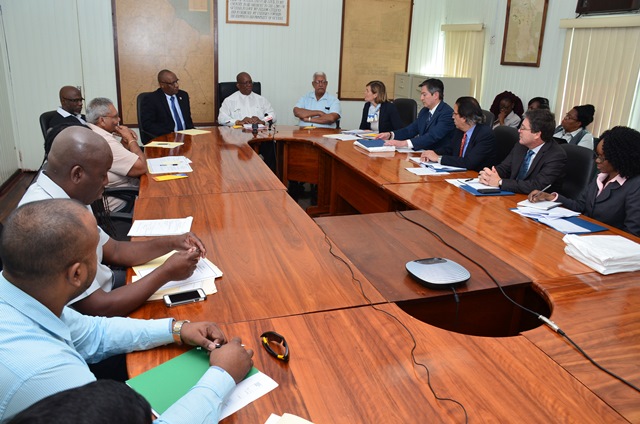 It is hoped that substantial progress in the particular area of ‘greening’ Guyana and helping to adapt to climate change will now be seen.

“We’re happy that farmers and various aspects of the population and businesses that cover this wide area that the canal traverses will have some level of relief being brought to them, and I hope in the context of further interventions, both from GRIF and the World Bank, that together these can mitigate the effects over time of climate change on Guyana’s economy,” Minister Jordan explained.

Whilst the project was signed by the Minister of Finance it was handed over to Minister of Agriculture, Noel Holder as his ministry will be executing works with supervision by the Office of Climate Change and the Ministry of the Presidency.

“Your susceptibility to climate risk is exceptionally high especially in the coastal areas, therefore the rehabilitation of the canal is a very laudable endeavour that the government is embarking upon with us (World Bank)… It’s helpful not only because it supports the economy but ….it is also extremely helpful for the wellbeing of the population,” Sirtaine explained.

Ninety percent (90%) of Guyana’s inhabitants live on the narrow coastal plain, which represents 10 percent of the country’s area. This area of reclaimed lands, much of which lies below sea level, is crucial to the economy of the country, supporting the majority of the population including the nation’s capital, Georgetown, and a large part of Guyana’s agricultural economy.

The Cunha Canal is a network of waterways which links up with the EDWC, a water storage system that provides regional agricultural lands with irrigation water and urban areas with drinking water. In addition, during times of heavy rainfall, this system provides regional drainage and flood control.

The Cunha Canal is located on the western side of the EDWC and discharges into the Demerara River. Around 1990, the canal was diverted from its original alignment to a smaller discharge channel. This diversion reduced the discharge capacity of the canal and went into disuse soon afterwards. The discharge through the canal was re-established during the 2005 flood, but with a limited capacity as it is affected by circuitous routing, structural limitations and development between the EBD public road and the Demerara River.