As part of the Ministry of Agriculture’s countrywide Outreach exercise, Agriculture Minister, Hon. Noel Holder, handed over chemicals to farmers whose livelihoods were affected as a result of attacks from rats and acoushi ants.

This exercise was done during the Ministry’s Outreach to the Upper Mazaruni region where the Minister and team held meetings with residents at Pariuma, Waramadong, Kako and Jawalla villages. 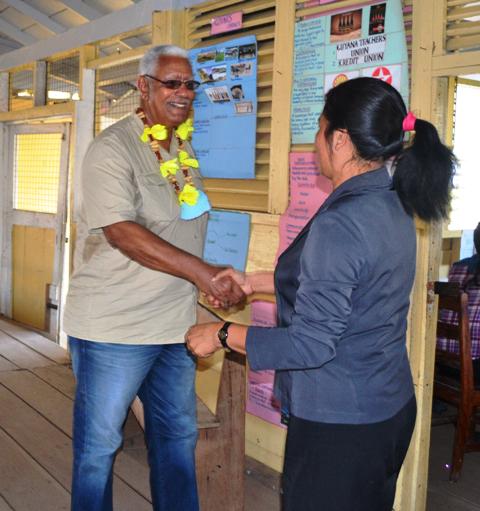 At the meeting held at the Pariuma Community Center Hall, several issues were raised with respect to firearm licences, the resuscitation of agriculture in the region, the incorporation of aquaculture and wild animals damaging agricultural produce.

Minister Holder underscored the importance of agriculture and for villages to embark on organic agriculture production.

“Agriculture Plays a vital role in ensuring food security. Efforts are now apace to ensure that the much needed assistance is provided to the Region.” the Minister said.

Ensuring that agriculture continues in the region remains an important pillar in the Ministry’s plan for agricultural development in hinterland areas.

At the meetings at Waramadong, Kako and Jawalla, similar issues were raised with access to markets and employment opportunities taking center stage largely due to infrastructural limitations.

According to residents, oftentimes there are no access to markets for the produce.  They made appeal to the subject Minister for assistance in marketing their produce.

The issue of firearm was also raised as the residents alluded to the fact that wild animals were a hindering factor to agricultural production.

According to Toshao Claude Hastings, of Kamarang, wild hogs which attacked their farms during the latter half of the year, destroys 50 percent of farms production.

The villagers made an appeal for a speedy decision to be made, noting that their livelihood threatened.

Minister Holder assured the residents that their concerns will be raised with the subject Minister, Hon. Khemraj Ramjattan and Hon Sydney Allicock to look at ways in which the issue can be resolved.