The National Drainage and Irrigation Authority (NDIA)’s Chief Executive Officer, Frederick Flatts is calling on citizens to be more responsible in their solid waste management. 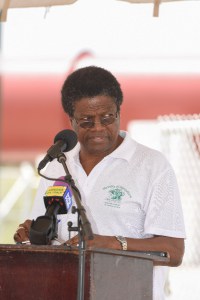 CEO of the National Drainage and Irrigation Authority, Frederick Flatts sounding the call for citizens to be more responsible in their disposal of solid waste

Flatts says the authority is continuing its role of improving drainage and irrigation in Guyana and is calling on citizens to play their part in the protection of the pump stations. According to Flatts, disposal of solid waste into the waterways is costing the nation a fortune. “… in Region Six someone threw a bag in the channel, unfortunately, it got into the pump and the cost of that repair alone is going to be about $5Million. That is the sort of damage I am referring to.”

Meanwhile, Head of the Agricultural Sector Development Unit (ASDU), George Jarvis says such irresponsible actions rob the state of the opportunity to utilise scarce financial resources to improve other communities and sectors.

“The Finance Secretary will tell you that that the $5Million was set aside for another project. If you look around and see what’s happening with our dams in the farming areas you will realise that most of the problems are avoidable. It calls for residents to be aware that if these structures are damaged, then the funds to repair will have to be taken from  another project that planned beforehand So, for example, we planned to do an additional six pumps, but we now have to repair two that were already operational. We need to ensure that to these very expensive and very sensitive and very important structures.”

Through the National Drainage and Irrigation Authority (NDIA), the government has been making continuous efforts to reduce the length of time water remains on the land in low-lying coastal communities. Through the Conservancy Adaptation Programme funded by the World Bank, three recent pump stations have been constructed and commissioned on the East Coast of Demerara.