The Guyana Livestock Development Authority (GLDA) is set to provide technical and other support to farmers in Buxton, Ithaca, Triumph and Mocha, as part of the Rural Agriculture Infrastructure Development project (RAID). 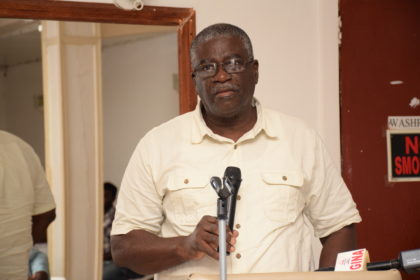 Chief Executive Officer of GLDA, Nigel Cumberbatch said, “We have our extension agents in the project area. They are meeting with not only the farmers who are continuously in production but, also new persons who are planning to utilise some of the lands that would be made available.”

According to the CEO, the livestock agency is providing help to aid the start up and expansion of livestock production in the identified areas. To this end they have an ongoing artificial insemination project as well as assisting farmers to access certain breeds of sheep and goat as well as swine.

“We have a commitment to make available to the farmers technological support so that they can start and also increase their production. We also are working to improve the production parameters for some of the farmers who are in that production area,” Cumberbatch said.

In addition, Cumberbatch disclosed while the interests of farmers remain traditional, dairy production and apiculture (beekeeping) are among other options.

The RAID project is funded through a combination of loan and grant funding from the Caribbean Development Bank (CDB). Its main objective is to provide government’s assistance to aid agricultural production in the identified communities. The project is being implemented by the Agriculture Sector Development Unit (ASDU) of the Ministry of Agriculture.