The Guyana Livestock Development Authority (GLDA), through the successful implementation of its Genetic Improvement Program, has been making invaluable contributions to the development of the swine and small ruminant sector.

Through the introduction of several programmes to redesign and re-establish the sector, farmers have the opportunity to better appeal to not only local markets, but top regional and international markets. 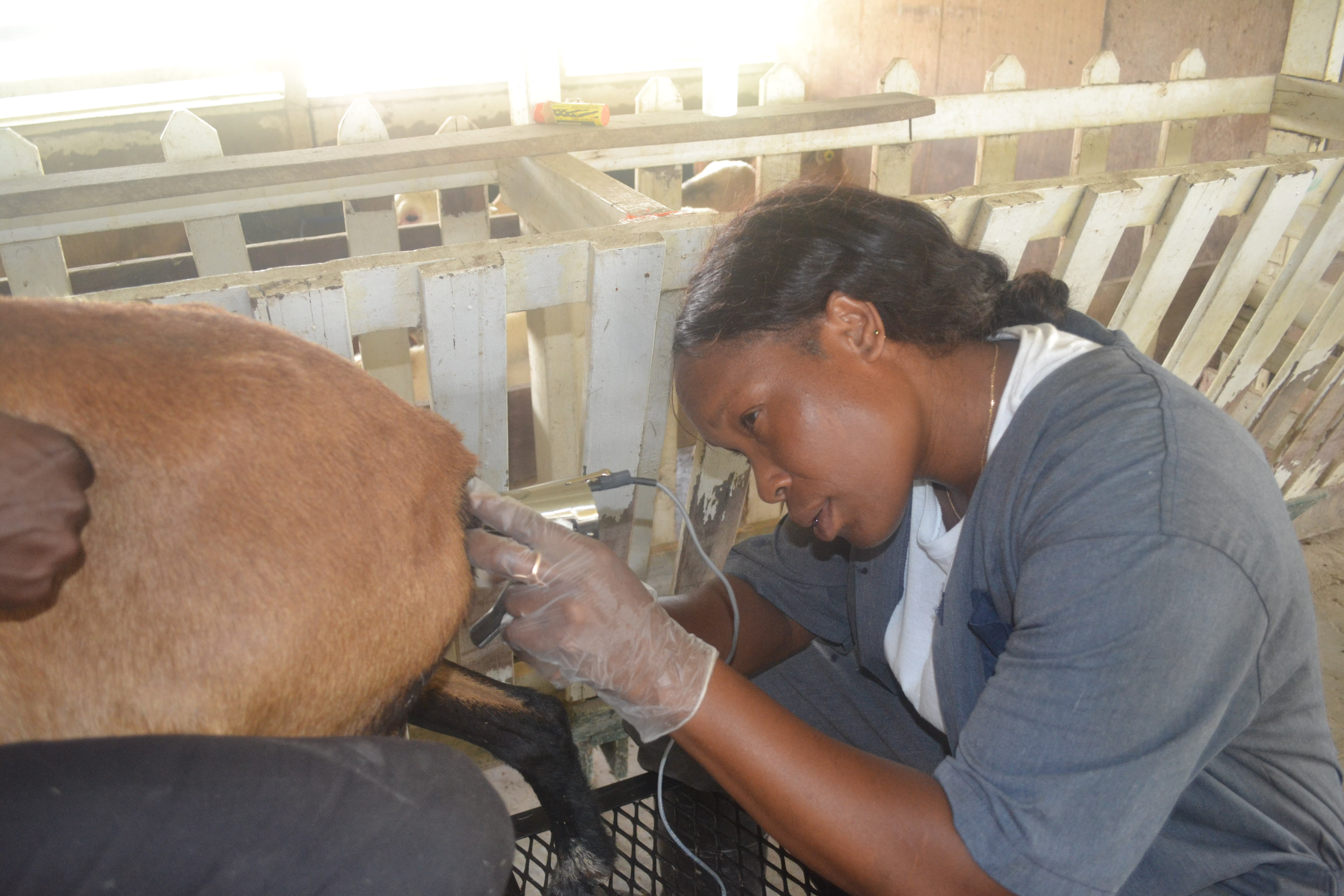 The authority commenced works on its Genetic Improvement Program by offering Artificial Insemination (AI) in cattle. After several successful trials, GLDA expanded its operations to offer AI in swine and small ruminants.

Dr. Renita Lashley, a senior veterinarian at GLDA who is spearheading the program travels across the country to perform AI services at several farms.

She indicated that the outcome thus far is astonishing in both swine and small ruminant AI cases.

“GLDA is looking to surpass all of our targets for 2018 as it relates to the genetic improvement program. So far our results are leaning towards achieving that goal. We are having amazing results and our pilot farmers are extremely happy with the results of the project thus far.” Dr. Lashley said.

In 2017, the authority started making semen from these animals available to farmers across the country, specifically in regions four, five and ten.

Farmers have expressed favourable returns adding that the program has allowed them to better provide for their families. 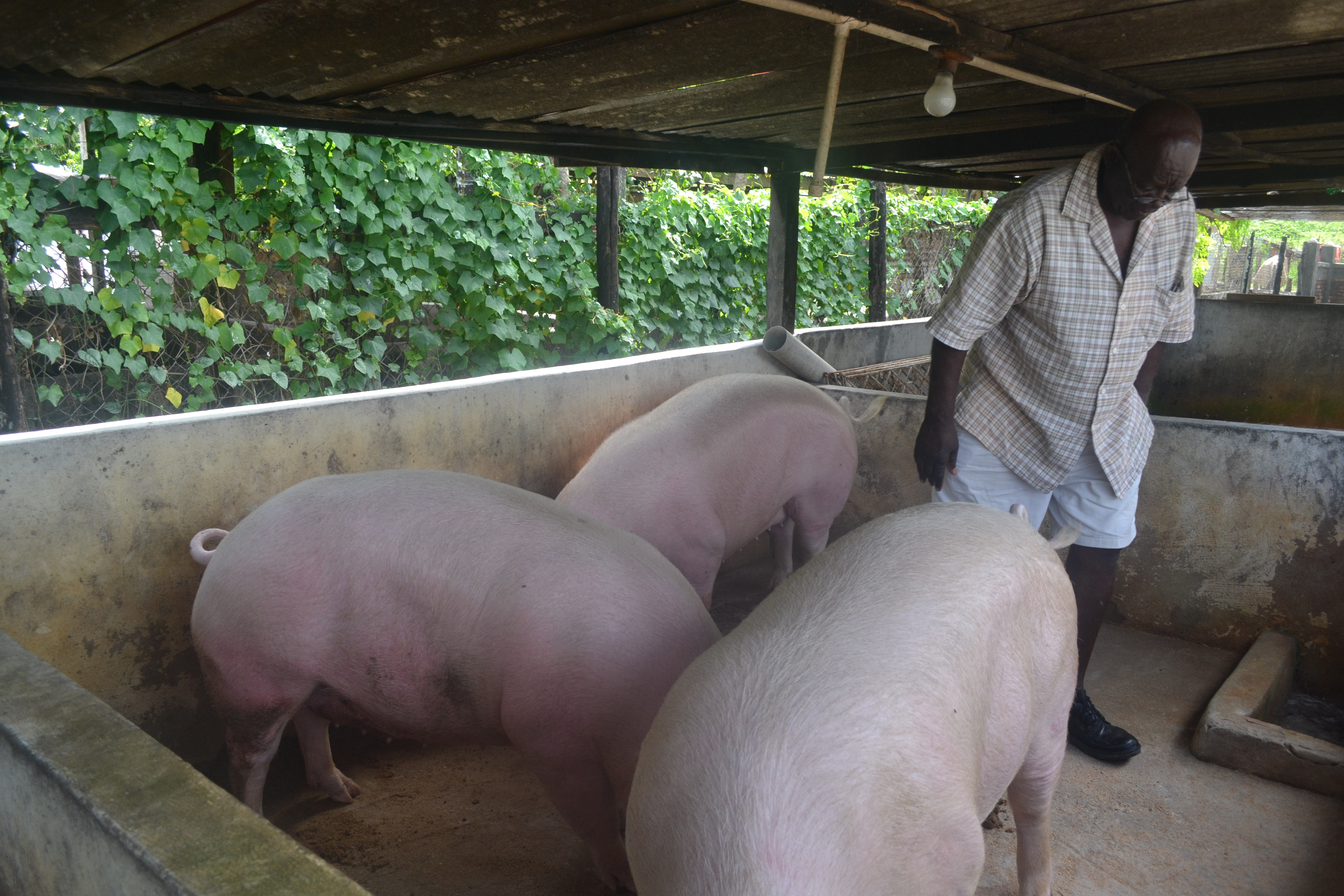 Mr. Eric Anderson and some of his animals

Eric Anderson, who has been involved in the raring of pigs for over a decade indicated that the program has played a major role in improving his operations since it was introduced.

“With GLDA’s AI services, I have been enjoying larger litter sizes with lower mortality rates. I am having piglets weighing as much as 2.4kg with litter sizes as large as 21 piglets. I am very happy about this but I must point out that proper feeding is essential – if the nutritional aspect of your operation is not right, it doesn’t make any sense.” Mr. Anderson said.

One aspect of the genetic improvement in swine program entails cross breeding animals with outstanding properties to achieve desired results. In some instances, the Tempo Bore was breed with the Land Race or the Large White while a cross between the Large White and the Land Race produced a breed referred to as the ‘Top Pig’. Each of these breeds are known either for their fast growth rate, high litter sizes or their ability to withstand differing climatic conditions. 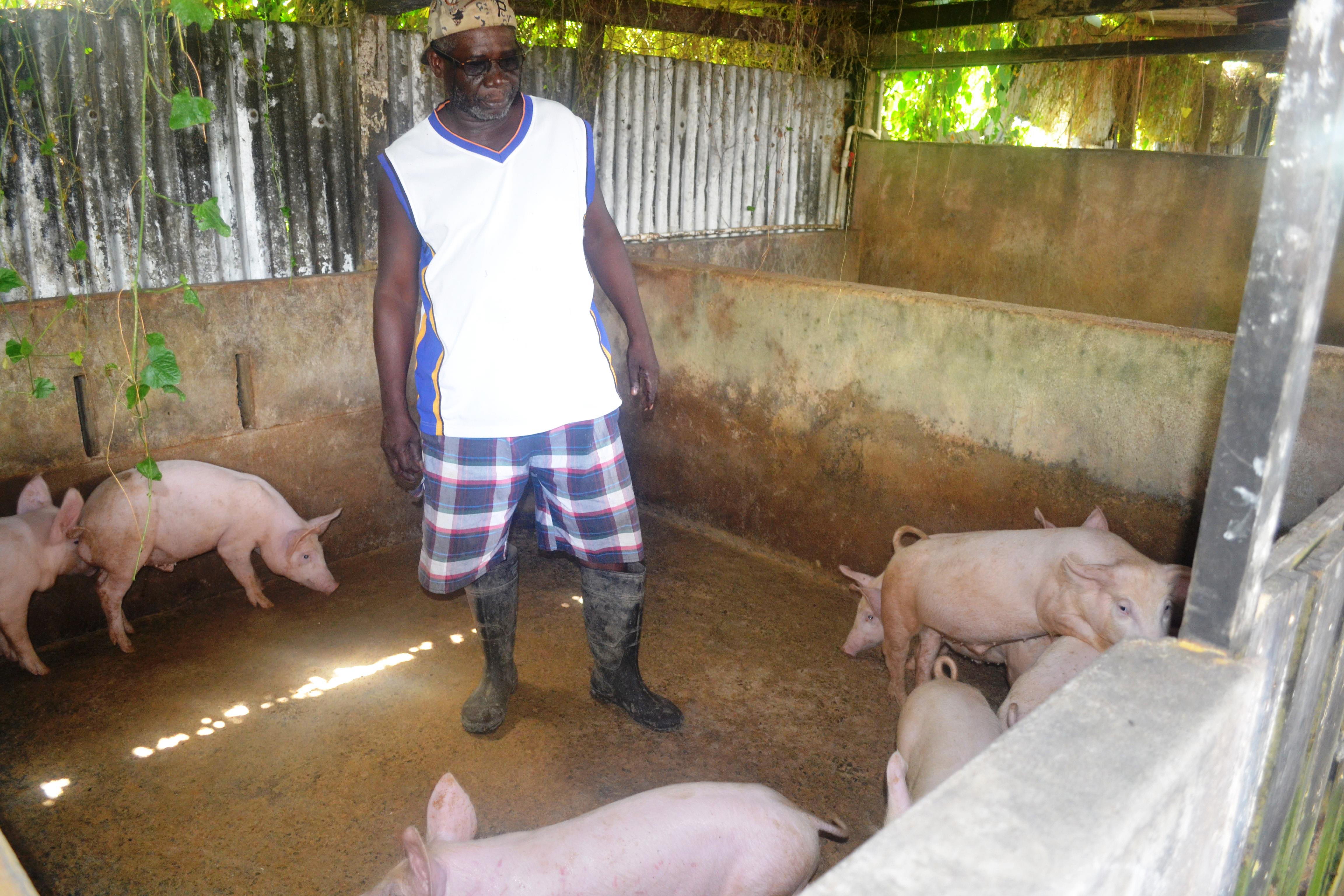 Mr. Owen McGarrel and some of the piglets he got using GLDA’s AI services

Another farmer, Owen McGarrel, who benefited from the program indicated that the piglets are growing quickly and producing quality meat which is what customers are looking for.

“I have pigs weighing as much as 139lbs (63.04kg) at three months and 260lbs (117.9kg) at seven months. These animals have all been conceived through AI and have very low fat contents which is extremely important to butchers. With an average litter size of 13 piglets I am very grateful to GLDA for taking the necessary steps to re-build the industry.” Mr. McGarrel said.

He too emphasized the importance of proper feeding and management adding that ensuring the animals have proper nutrition is 80% of the work.

In 2016, GLDA imported two Tempo Bore pigs with the aim of improving the stock and ultimately revolutionising the swine industry. The animals were imported at the cost of US $4,500 from Costa Rica to be used for artificial insemination purposes only.

Chief Executive Officer of the Guyana Livestock Development Authority, Mr. Nigel Cumberbatch, indicated that the genetic improvement program was developed to allow Guyana to enter into international markets while being able to satisfy the local demand.

“Guyana’s swine industry is relatively small. As part of GLDA’s mandate, we aim to change this. We intend to tap into new markets and produce top quality cuts of pork.” Mr. Cumberbatch said.

In addition to AI in swine, GLDA, through funding from the Caribbean Agricultural Research and Development Institute’s (CARDI), Agricultural Policy Programme (APP), procured three mature Katahdin Rams to commence operations in the small ruminant aspect of the genetic improvement program. The rams were acquired in 2017 at the cost of US $9000 and have since been trained and acclimatized.

Agriculture Minister, Noel Holder in an invited comment indicated that re-building the country’s livestock industry is a major priority.

“When taking office in 2015, it was recognized that the livestock industry had suffered from lack of technological inputs thus resulting in alarmingly low numbers. In addition to conducing an agriculture census, a five year plan has been developed that will see rapid increases in genetically modified stock country wide.” Minister Holder said.

Holder further stated that through the introduction of improved breeds and gained knowledge of new technology, government is seeking to ensure that the livestock industry is able to secure international marketing capabilities. 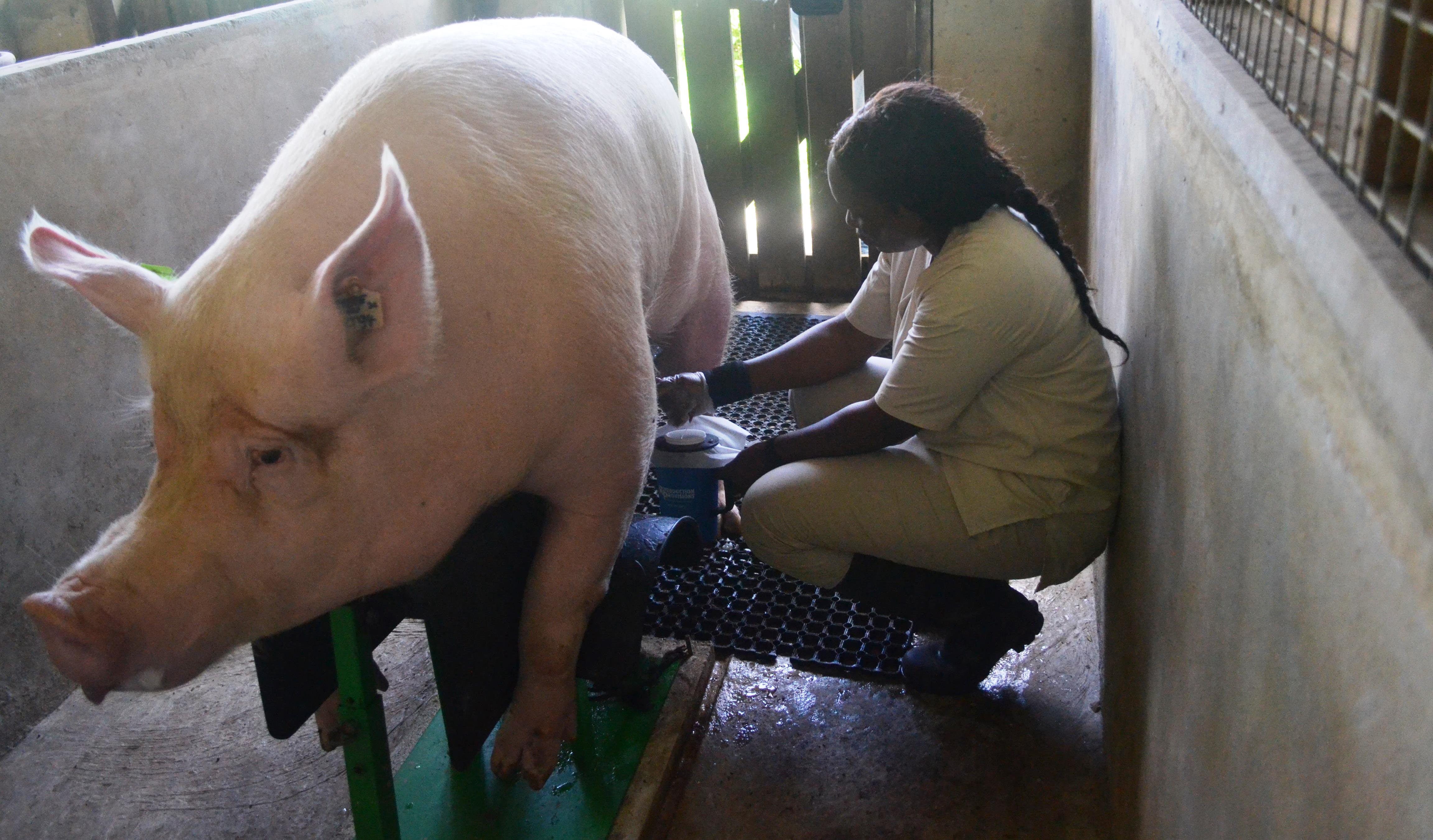 Dr. Lashley collecting semen from one of the animals to be used for AI 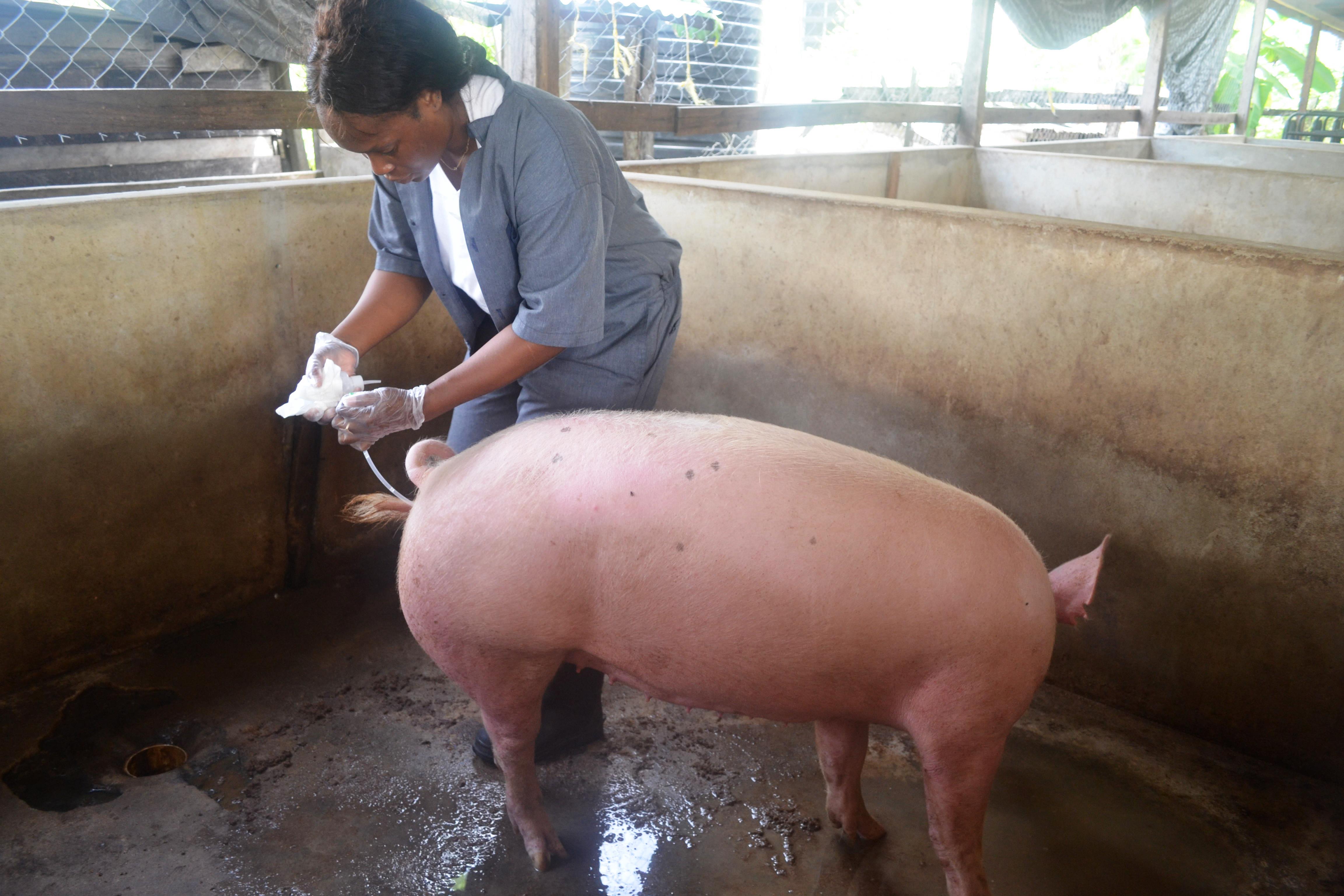 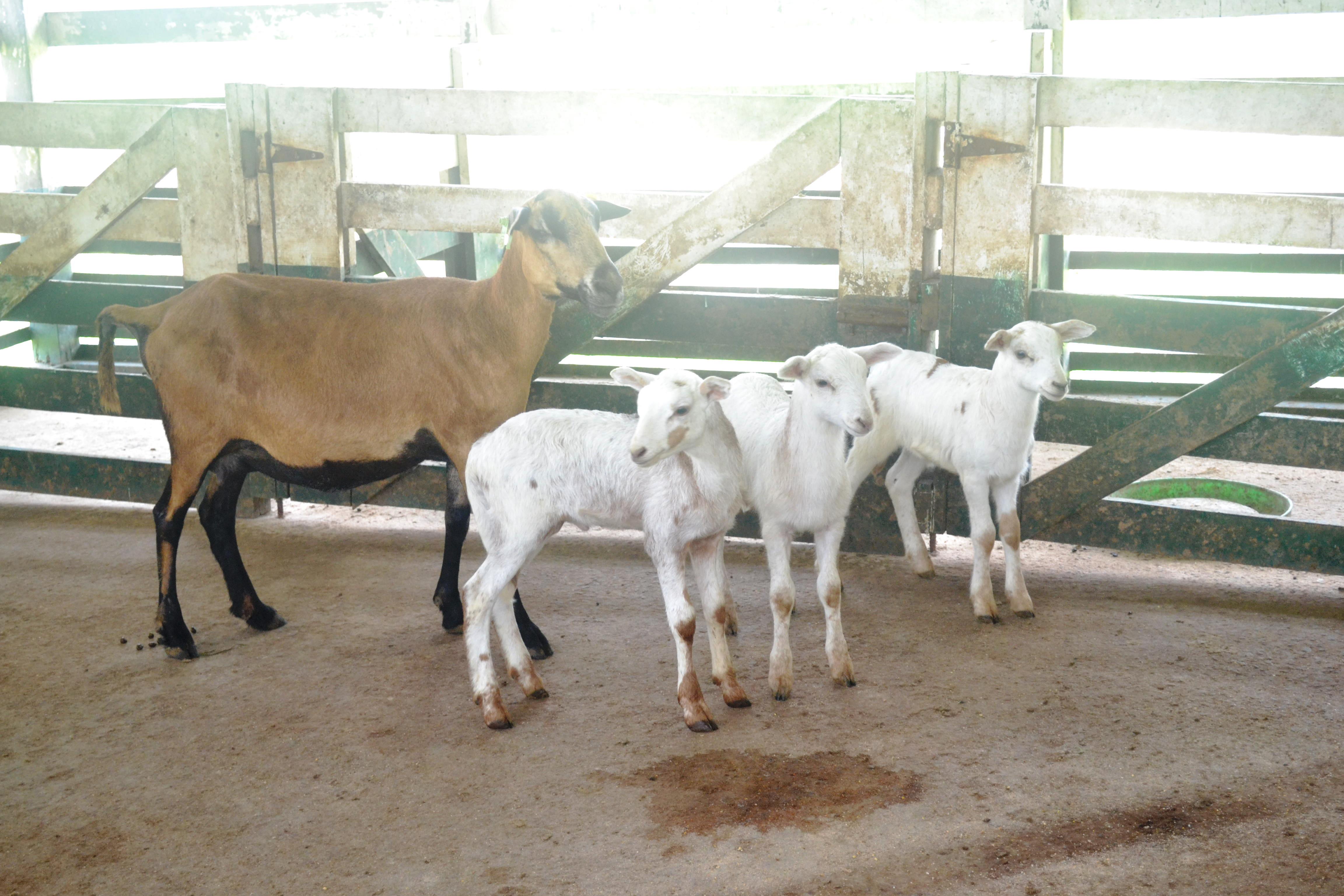 Animals that were conceived through AI with their mother 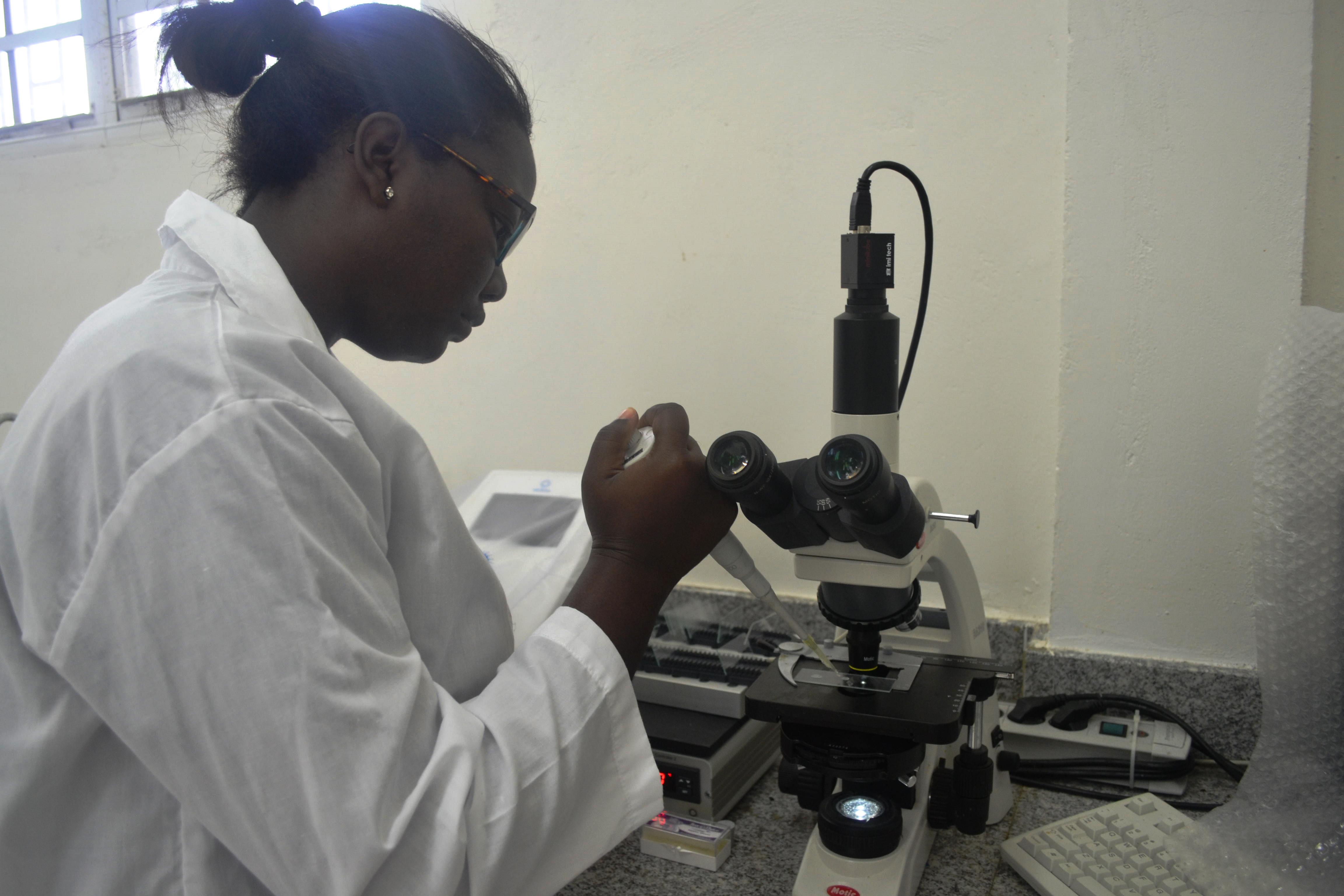 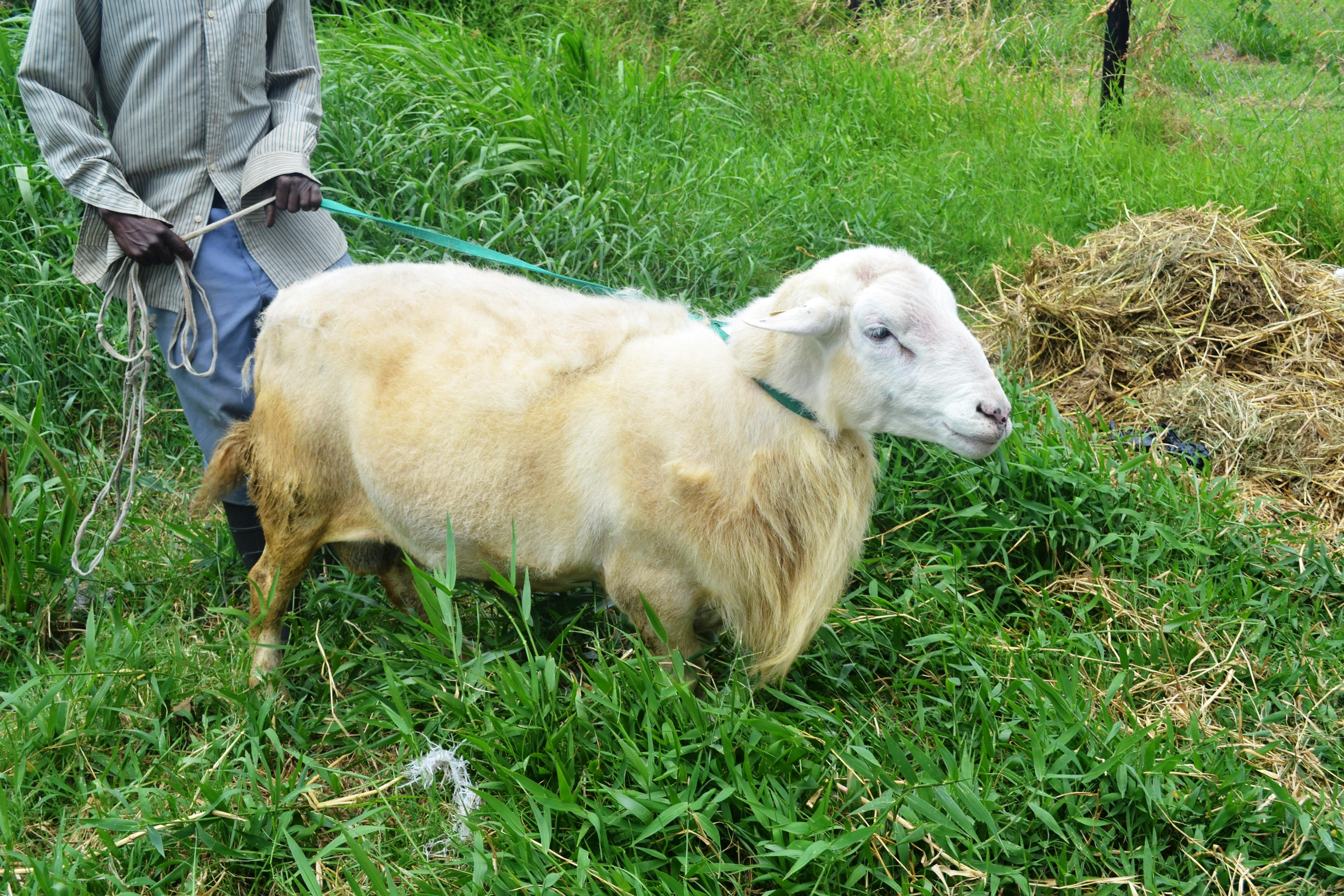 One of the rams imported for AI purposes 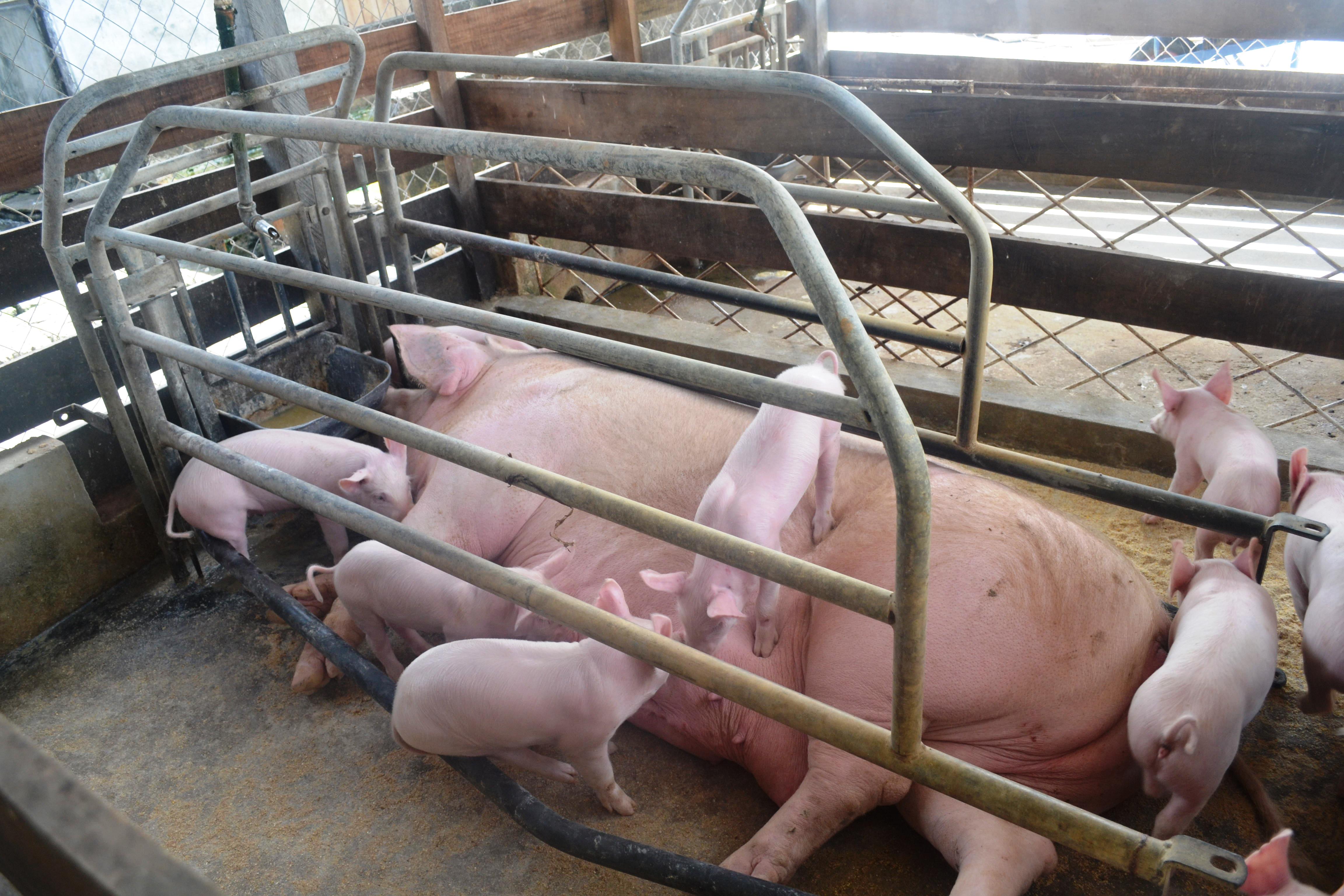 Piglets that were conceived through AI with their mother 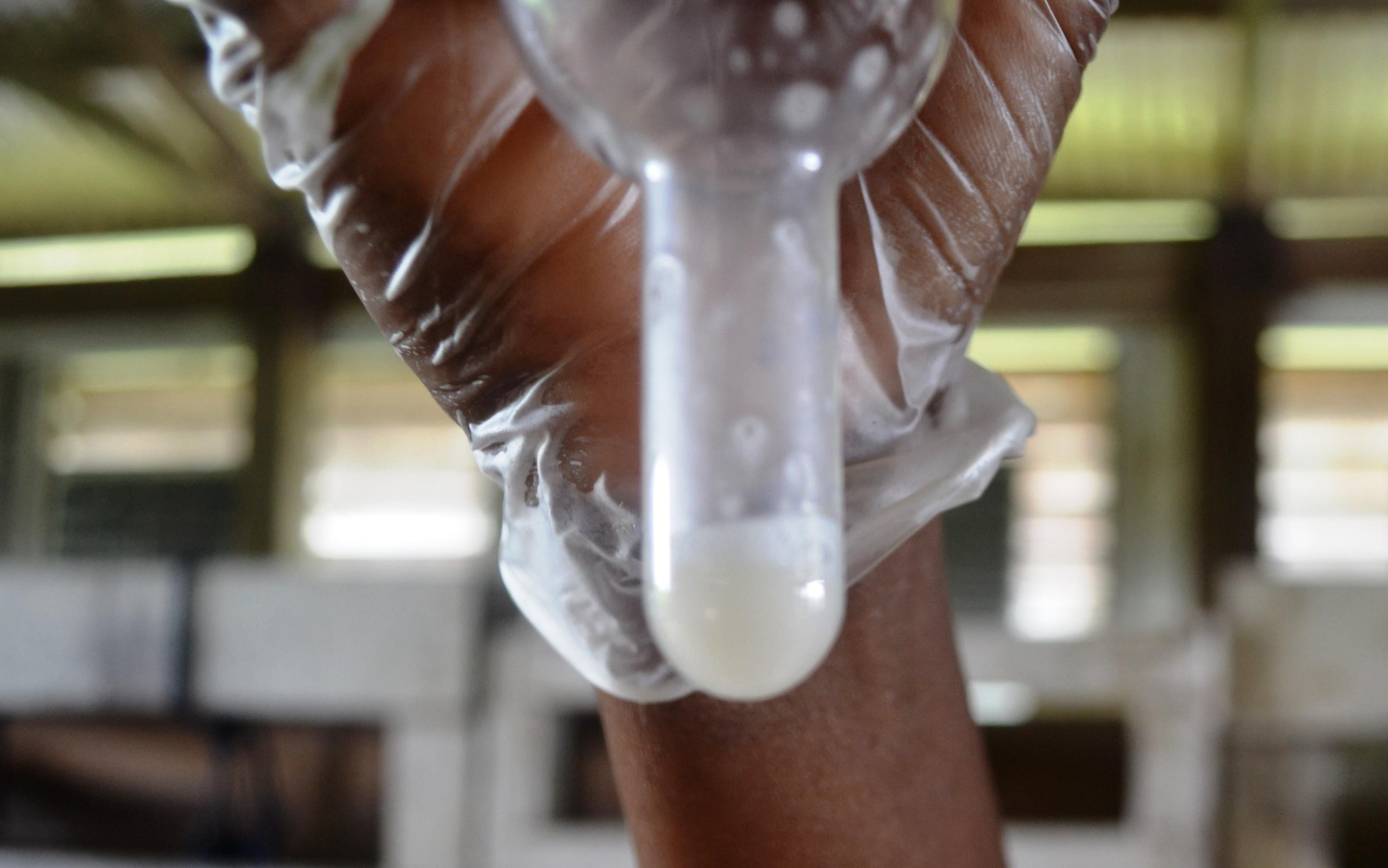 Semen collected from one of the imported rams for AI purposes 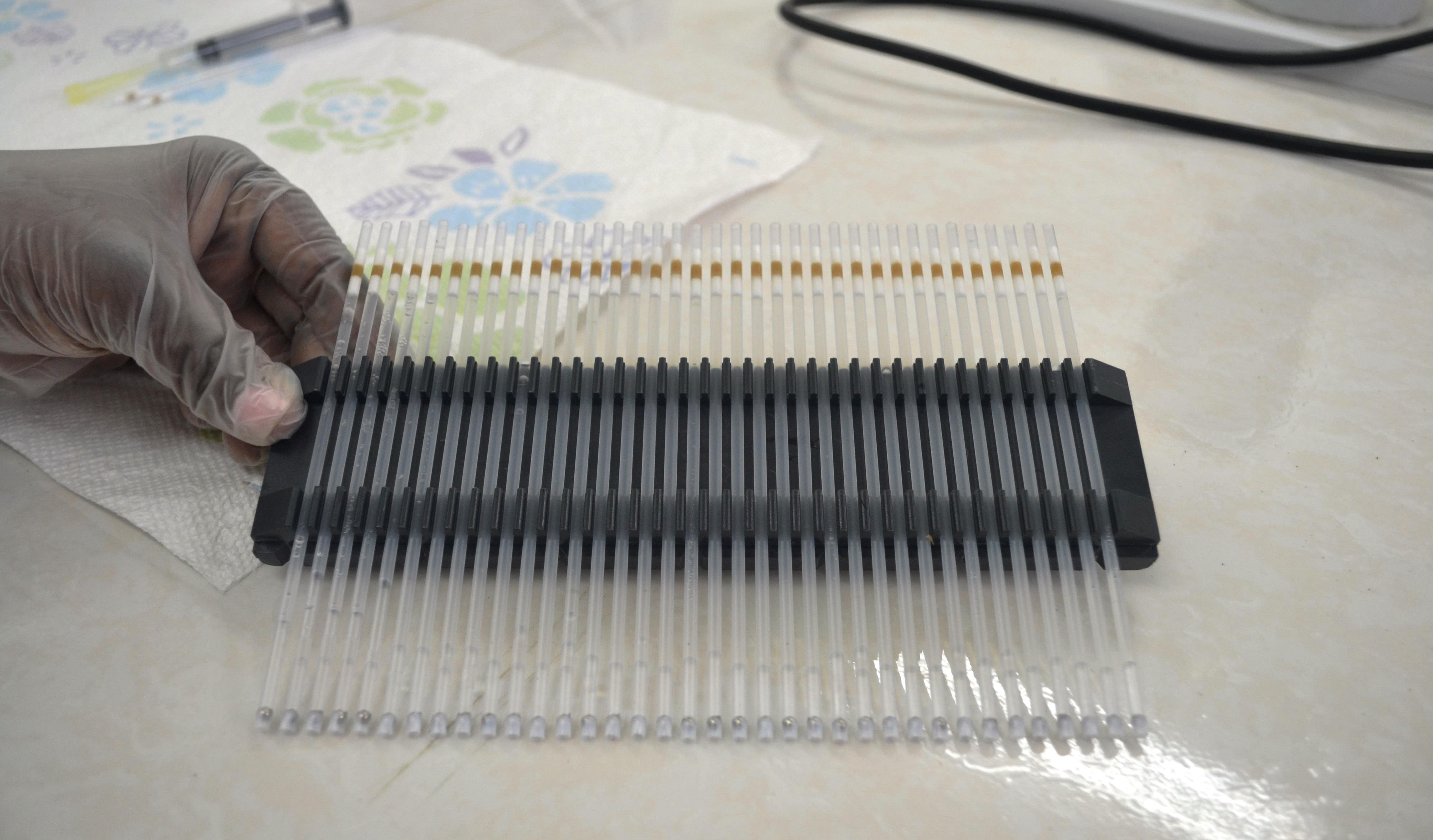 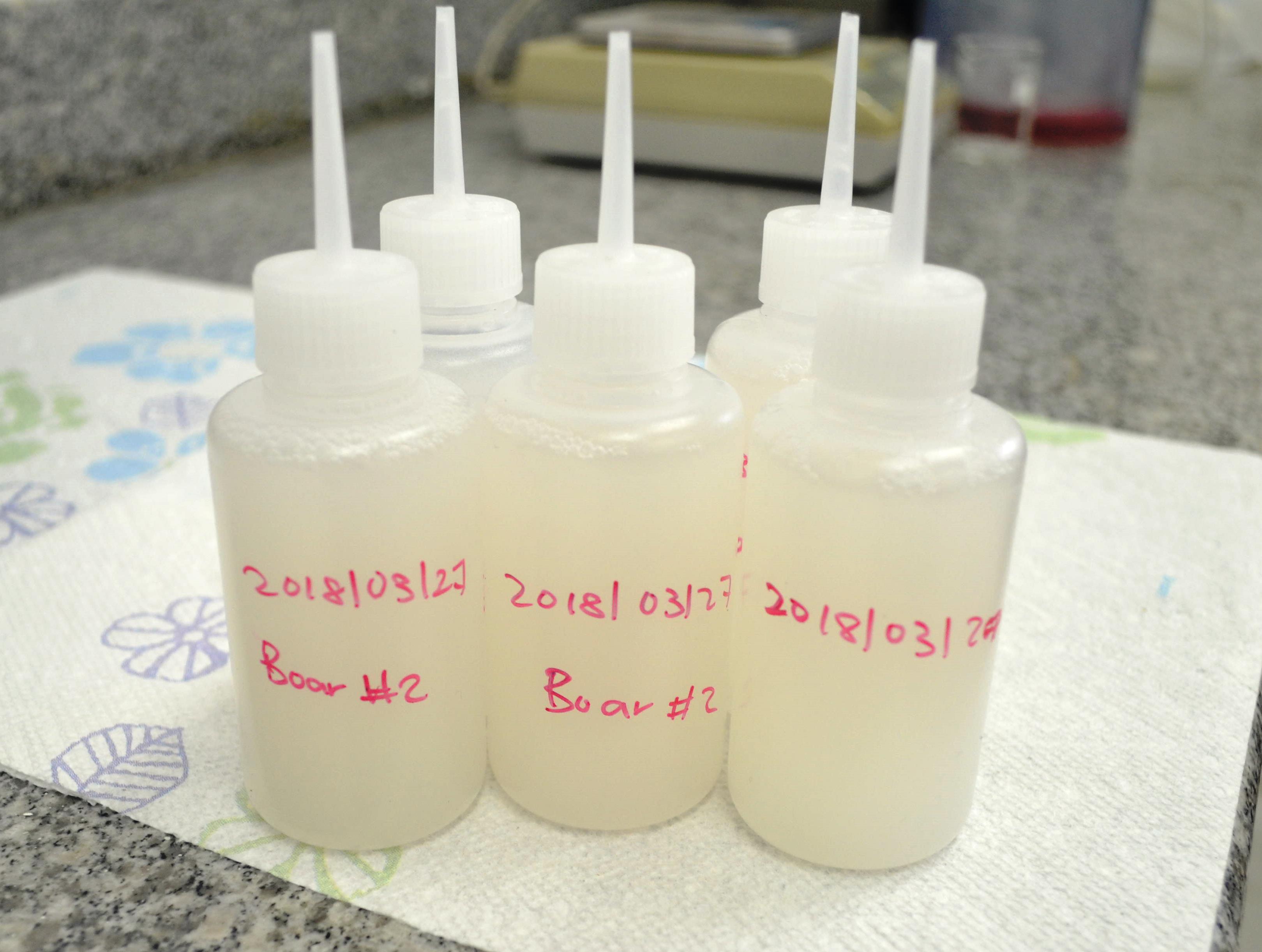 Semen sample that will be used for AI 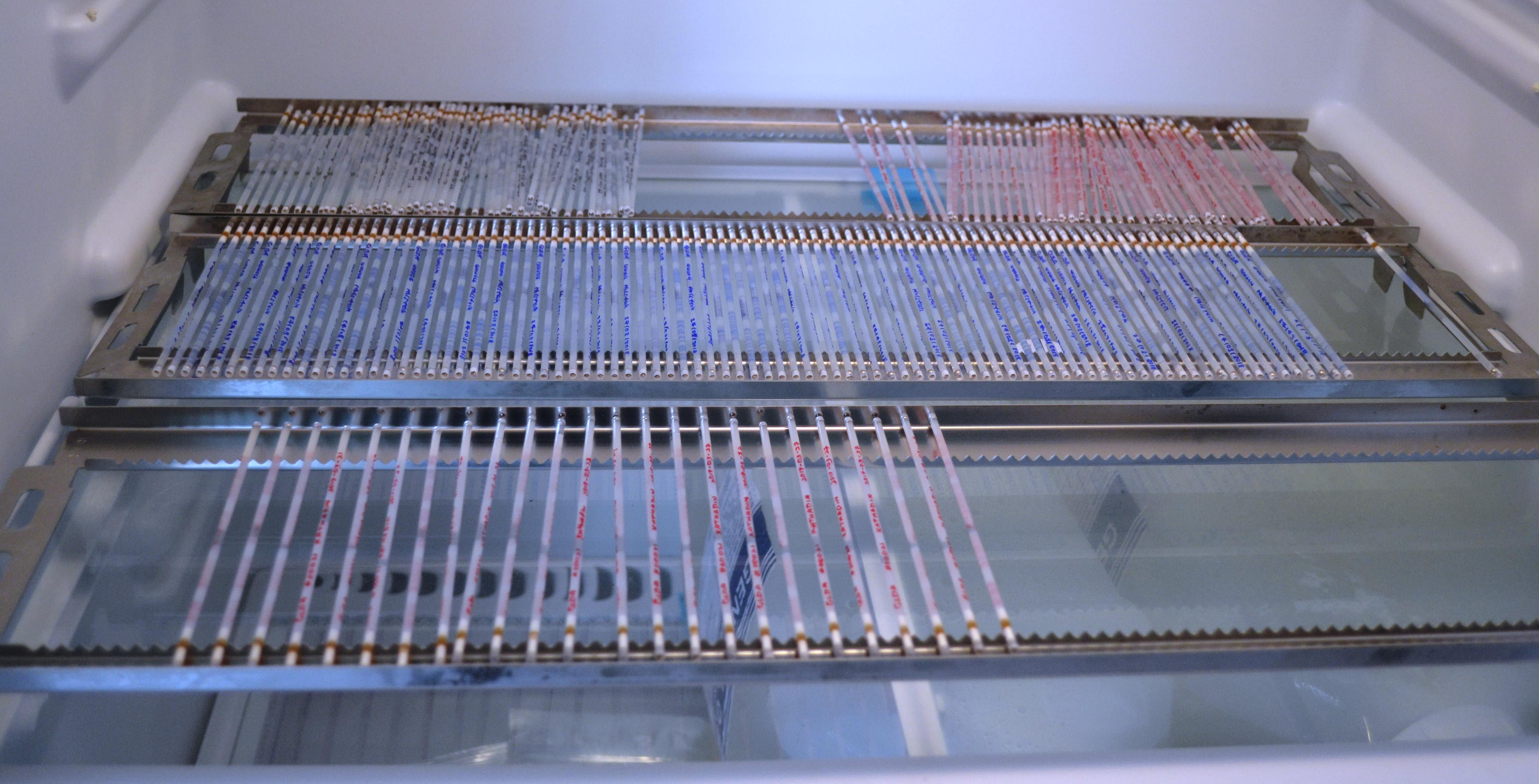 Small ruminant semen samples to be used for AI