Residents on the East Coast Demerara (ECD) are assured of adequate preparations for flood prevention during the May/June rains. 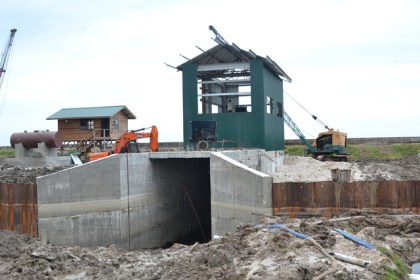 Chief Executive Officer (CEO) of the National Drainage and Irrigation Authority (NDIA), Frederick Flatts, in an interview with the Department of Public Information (DPI) said new pump stations at Enmore, Friendship/Vigilance, and Lusignan are in an advanced state of completion.

“We have at least two of the pump stations, that we can actually use now. So, I have gone as far as telling the contractors that now that we have that, we have to bring the one at Buxton up, to get it completed by the May / June rains. The one at Lusignan is already operable. we had to go ahead and get the pump started during the rainy period around Christmas. There are still some fine things to be done but those are 3 pump stations that are substantially completed along the east coast.”

Further, the CEO said the pumps will increase drainage capacity and prevent flooding in ECD communities which are traditionally inundated with flood waters whenever it rains heavily.

“We are doing this to raise the drainage coefficient. By drainage coefficient, we mean the ability to pump or to discharge as much water as possible from the land. The problem we have along the coast is that historically our drainage has been 1.5 inches in 24 hours; so, whenever rainfall exceeds that amount you would have flooding. Whenever we supplement gravity flow with pump drainage we are able to raise that figure significantly.”

In addition, the NDIA Chief Officer said the completion of the pump station at Friendship/Vigilance will bring major relief to Buxton and its environs.

“We are seeking to have that pump station completed in time for the May /June rain. As you may be aware Buxton is one of the areas where you almost always have flooding during the rainy season. We are hoping that for the first time in decades Buxton will not be flooded if our pump station is completed.”

The NDIA is the agency responsible for maintenance and development of the drainage and irrigation structures across the country. In 2017, it received budgetary allocations of approximately $3.5B and was able to accomplish in excess of 98 percent of planned works. Budgetary allocations for 2018 have been increased to $3.75B. 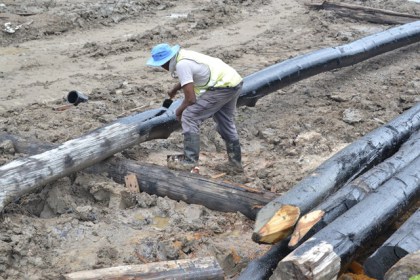 One of the workers preparing logs for revetment work at the Buxton Pumping station. 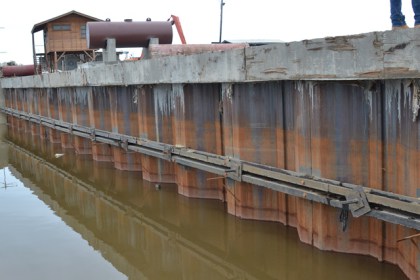