As the debates for the National 2018 Budget continue, Region Ten Member of Parliament (MP), Jermaine Figueria defended the government’s commitment to the workers of Guyana, more specifically those of the Guyana Sugar Co-operation (GuySuCo.) 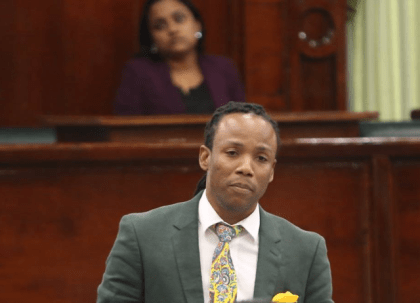 MP Figueria, rebutted statements made by Opposition MP Komal Chand, who claimed that the 2018 budget as presented by Finance Minister Winston Jordan consists of “anti-people policies” and “doesn’t take into consideration the well being of the sugar workers.”

However, Figueria noted that unlike the Opposition, the Coalition government’s aim to ensure that every citizen in Guyana regardless of class, benefits from the good life which is being pursued.

Figueria explained that “My region, Mr. Speaker, lost hundreds of jobs in bauxite and gold (Omai) during the PPP reign and things were never the same since, but we had to move on.” He noted that “The people of Region Ten, despite being beaten to the ground …rose up and without the many options our brothers and sisters of GuySuCo are being offered.”

Continuing to address the statement, MP Figueria said that strides made by the government to address issues affecting the sugar industry have been significant. From 2015 to present the administration has plugged $32B. into the indebted GuySuCo.

Figueria explained that, “no man in a rational state of being, will deny that this government has not demonstrated its commitment to GuySuCo and its workers, with its continued provision of billions in subsidies each year since it took office. The question one should ask is when should this end, since these demands keep getting greater and greater?”

The Region 10 MP said that sugar’s present conundrum grew exponentially under the PPP/C administration and GAWU. He accused Chand, of guilt by association for the present state of GuySuCo, since he always sided with the then PPP/C administration even as GuySuCo fell to pieces. Figueria said one need only look at the cost of work stoppages, Chand presided over during the last 40 years.

Komal Chand during his presentation had stated that Budget 2018 “dashed the hopes” of the Guyanese people. He compared the budget to 2017’s presentation remarking that “the APNU+AFC is recycling budgets and are taking credit for projects pedalled by the PPP/C when they were in government.”

However, MP Figueria rebutted, “let me state from the outset that the only indictment to this budget is the time one is allotted to speak, it’s like placing a child in a candy store and saying you only have two options out of many.”

Figueria also opined his firm conviction that “Budget 2018 far supersedes, in my humble opinion, the others past,” adding that the policies contained therein, will positively affect the nation way beyond 2020.