The 71st Special Meeting of the Council for Trade and Economic Development (COTED) on Agriculture was declared open today, at the Caribbean Community (CARICOM) Secretariat.

In brief opening remarks, Secretary-General of CARICOM, Irwin LaRocque recalled the “unparalleled” destruction caused by recent hurricanes in the Region and paused to recognise the “significant mobilisation of the Region to assist all affected state. 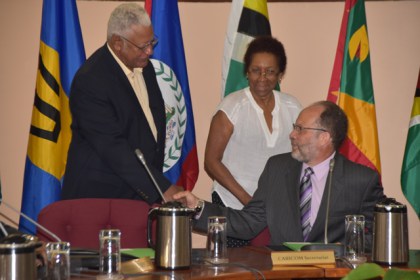 “Never before has two category five hurricanes ravaged the Region in one season never before has a hurricane moved from category 3 to category 5 in thirty-six hours, as Maria did. The events of last month points to the need for our region to build to face what appears to be the new normal”, La Roque said as he acknowledged the dangers of climate change.

“A strong and well-adapted food and agriculture sector means that we are better able to guarantee our food security and create larger economic opportunities for our region,” La Roque noted.

Meanwhile, Minister of Agriculture, Noel Holder told the gathering of Agri-Ministers and technocrats from around the region that in recognition of the importance of agriculture in the achievement of food and nutrition security in the region. “Guyana has adopted a multi-sectoral approach in ensuring that all stakeholders play a meaningful role in addressing the key pillars of security.”

While acknowledging challenges faced, Minister Holder said the “Ministry of Agriculture is committed to ensuring that availability of food is increased and sustained in both quality and quantity.” 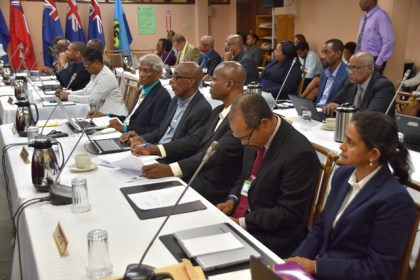 Today’s meeting was chaired by Minister of Agriculture, Animal Husbandry and Fisheries of Suriname, Soeresh Algoe. The meeting is expected to examine issues aimed at advancing the Agricultural Policy Framework of the Region, trade issues, value chain development through innovations in agriculture and fisheries, strengthening inter-sectoral linkages between food and agriculture and public health in addressing non-communicable diseases, and matters relating to the common external tariff among others.

COTED promotes trade and economic development of CARICOM and oversees the operations of the Single Market and Economy.