Home NEWS International Day for Conservation of the Mangrove Ecosystem

International Day for Conservation of the Mangrove Ecosystem

Minister of Agriculture, Noel Holder, on Friday visited two mangrove restoration sites on the East Coast of Demerara – Better Hope and Mon Repos. These two sites are among the success stories of natural restoration. 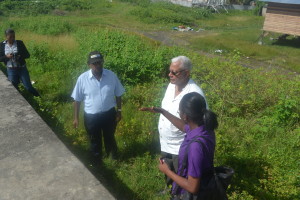 Agri. Minister Noel Holder is pictured with NAREI CEO, Dr. Oudho Homenauth and other NAREI staff during the visit to the mangrove restoration site.

Whilst acknowledging the impressive works done by the Mangroves Department of the Mangrove Restoration Project, Minister Holder emphasized the need for synergy between the agencies (NAREI, the National Drainage and Irrigation Authority (NDIA) – responsible for conservancy, irrigation and drainage, and the Ministry of Public Infrastructure) responsible for river and sea defence. He noted that the agencies under the Ministry need to collaborate to ensure the effective and efficient use of resources.

The ongoing mangrove restoration programme continues to contribute towards Guyana’s development as a Green State and achievement of international communities including the Aichi Biodiversity targets and Sustainable Development Goals.

In addition to working with local communities and partnering agencies to restore the degraded coastal mangrove ecosystem, NAREI will also be working with NDIA to construct groynes (rigid hydraulic structure built from an ocean shore (in coastal engineering) or from a bank (in rivers) that interrupts water flow and limits the movement of sediment from drainage outfall channels and prevents erosion) at critical points along the coast. The agency had previously constructed one of these structures at Mon Repos. 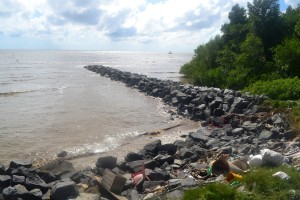 A groyne that was constructed.

On July 26, Guyana celebrated International Day for the Conservation of the Mangrove Ecosystem, recognizing a proclamation made by the United Nations Educational, Scientific and Cultural Organization (UNESCO) that was adopted on November 6, 2015 by the General Conference of UNESCO. It underlined the importance of mangrove ecosystems as “a unique, special and vulnerable ecosystem, providing by virtue of their existence, biomass and productivity substantial benefits to humans, providing forestry, fishery goods and services as well as contributing to the protection of the coastline and being particularly relevant in terms of mitigation of the effects of climate change and food security for local communities.”

NAREI is the agency that holds responsibility for mangrove restoration and conservation in Guyana. Under its strategic work programme, the restoration of this highly productive forest protecting our shoreline has been achieved.  Given Guyana’s vulnerability to the potential impacts of climate change, especially on its coastal region, mangroves are an important part of the country’s overall climate change mitigation and adaptation strategy. 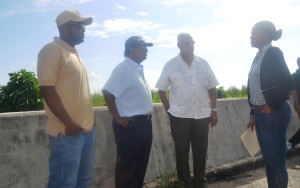 Even with countless effort being made to encourage sustainable mangrove restoration, farmers continue to graze their livestock in areas where mangroves are growing, destroying the young seedlings and restricting the forest from reaching its full potential. Persons dumping and burning garbage between mangroves, cutting mangroves in order to construct housing and other structures are asked to desist from such activities and exercise a level of responsibility as mangroves play a significant role in the fight to combat climate change, directly improve the country’s sea defences and promote the government’s ‘Green State’ agenda.