At the beginning of 2016, the initiative to improve productivity at the Guyana Sugar Co-operation (GuySuCo) Uitvlugt estate was heavily considered by its management. Even as the government has amalgamated some estates leaving three functioning, great support has been lent to the Uitvlugt Estate Improvement Programme.

This programme aims to see an expanded cultivation, increased cane supply and increased sugar production which will assure the sustainability of the estate and lead to greater job opportunities.

Over the past 18 months, Estate manager, Yudhisthira Mana and the managerial team at Uitvlugt highlighted some of the areas where improvements have already been recorded. Prior to January 2016 infrastructure at Uitvlugt which would facilitate efficient cane sugar production were all in a deplorable abandoned state. 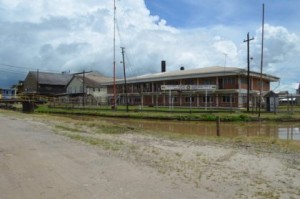 The Outside of the Uitvlugt Estate, West Coast Demerara

The move to improve the estate’s infrastructure came as part of government’s plan to re-organise the sugar industry. In Mana’s simple presentation, it was noted that replanting of the cultivation on rehabilitated fields is expected to increase by 20 per cent. Moreover, the production target is progressively increasing from 20,178 tonnes in 2017 to 21,ooo tonnes  by the end of 2018. The ultimate goal is to eventually produce 40,000 tonnes by the end of 2020.

The Estate Manager explained that, “How will we produce 40,000 tonnes of sugar at this location. I know you will ask the question because we are currently producing just about 16,000… We would have embarked on a vigorous programme to ensure we have our cultivation rehabilitated in the shortest possible time.” 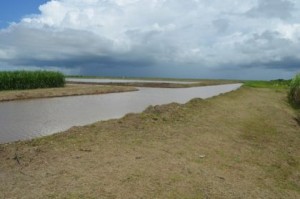 Some of the issues affecting poor production at this particular estate include poor yields, low harvesting results, poorly maintained navigation systems among other infrastructural deficiencies.

Uitvlugt factory is also being upgraded to ensure its reliability with increased cane supply. Infrastructure works have commenced  to relocate the cane gantry, weigh hopper, feeder table and cane carriers from the Wales factory to Uitvlugt Factory. Also, under the reorganised structure the Uitvlugt estate currently has 406 vacancies existing in the agriculture department of estate.

Additionally, to increase the output of this estate, GuySuCo is making lands available to farmers to have the cultivation expanded from 1,500 hectares to 3000 hectares by the year 2020. Communications Specialist of GuySuCo, Audreyanna Thomas said that, “with the improvements that are taking place at Uitvlugt and the other amalgamated estates, GuySuCo would no longer need government subventions by the year 2020.”

The factory at Uitvlugt is configured differently from the one at Wales. This means that the infrastructural improvements that are being undertaken will facilitate joint cane production from both Wales, Uitvlugt and the private cane farmers .