The issue of ‘illegal importation’ of shrimp, Fish into Guyana’s shores has been a cause for concern and one the relevant authorities have been tirelessly trying to address over the years.  As a follow-up to this a high-level meeting was today convened in the boardroom of the Ministry of Agriculture and a number of decisions were taken to ensure the issue becomes a thing of the past.

Among the interventions, there will be a collaborative effort taken to ensure compliance, increase monitoring and enforcement of borders to tackle the known smugglers within Guyana and Suriname and an increase in fine levied against offenders.

Crime Chief, Wendell Blanhum has committed to ensuring stronger enforcement, working along with the Commander of B Division. He added that while it is important for the police to ensure compliance, it is also necessary for all players involved to work together.

“It is important for all the key personnel’s to work in together to ensure that the issue of smuggling is addressed…we (police) have had a close relationship with Aquaculture Association and together I am adamant we can have this matter addressed,” he said. 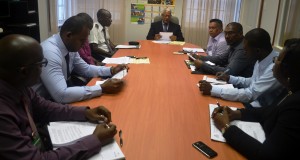 Minister Holder and other officials during the meeting

Agriculture Minister, Hon, Noel Holder in addressing the matter spoke of the constraints which such an issue has posed on the local market adding that it has paved the way for ‘unfair competition’.

“The smuggling of shrimp, fish and fish products in and out of the country affects us all. In addition, the smuggling of shrimp and fish into Guyana has the potential to generate many problems such as the introduction of pest and disease into our environmen…so while you may be getting a cheaper commodity, you may be damaging your health and the health of your family,” the Minister said.

Meanwhile, Suedat Persaud, Secretary of the East Berbice/ Corentyle Aquaculture Association voiced his concerns at the manner in which the issue is being handled allegedly by the Customs and Law enforcement officials at Springland.

While adding that more needs to be done at the level of the Customs Department,  Persaud lauded the efforts of the Food and Drug officials,  the Guyana Revenue Authority and the Police Force for assisting where necessary in the past.

“While we have had some assistance in the past, it remains insignificant. Our livelihoods are on the breadline and as such, we (Association) believed more needs to be done,” he said.