NDIA to commence resuscitation of critical sluices in Region 5

The National Drainage and Irrigation Authority (NDIA) is set to commence resuscitation works on three sluices in Region Five. With a maximum estimated cost of $70Million, works are expected to commence within the next ten days and will involve the clearing of outfall channels, earth, and other structural works. 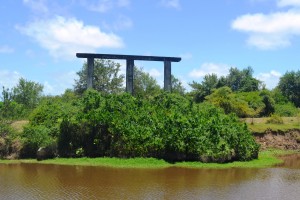 One of the sluices to be resuscitated

Chief Executive Officer of NDIA, Mr. Fredrick Flatts explained that the resuscitation works to the sluices are a result of flooding issues within the Region, specifically between Tempe and Bush Lot.

“By resuscitating these three sluices, we believe we’re going to reduce the amount of water in the main canal, and by reducing the water in the main canal we’re going to reduce the flooding in the residential area. There will also be improved drainage to the farmlands but right now, farmlands are not flooded. Even though it will help the farmlands, we are thinking first and foremost about the extremely low-lying residential areas.” Mr. Flatts said. 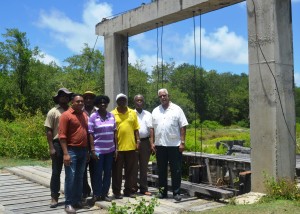 Agriculture Minister, Noel Holder, during a visit to sluices along the Region 5 coastland earmarked for resuscitation, indicated that government remains committed to ensuring citizens are able to live comfortably and are not constantly affected by flooding.

“Guyana is already below sea level so we have to work extra hard to put measures in place to ensure the health and safety of our citizens. Flooding not only affects economic growth, but also the health of citizens in flood-prone villages. Therefore, works like this  are seen as critical and important developmental areas for government to invest in.” Minister Holder said.

With regards to maintenance works, the CEO said NDIA will deploy its pontoon and excavators to conduct the necessary maintenance works which involve the clearing of the outfall channels. He also disclosed that the authority is expected to purchase a dredge to assist with maintenance of drainage channels across the country. 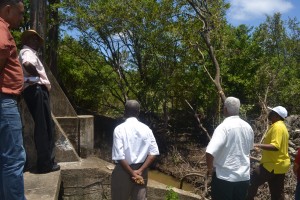 Minister Holder and other officials at the Trafalgar Sluice

Mr. Flatts also pointed to the fact that the Mahaica/Mahaicony/Abary Agriculture Development Authority (MMA/ADA) also has a big part to play to improve the drainage in the Region.

Sluices identified for resuscitation are located in Number 11, 12 Villages, Golden Grove/Lovely Lass and Trafalgar/Union, Region 5. Works are expected to be completed by the ending of May, ahead of the rainy season.