The 2017 figures for the first crop of paddy have shown that Guyana’s rice industry is progressing as opposed to claims made that the industry is failing. Extension Manager at the Guyana Rice Development Board (GRDB) Mr. Kuldip Ragnauth has indicated that rice production figures are expected to be higher than last year’s based on a number of acres sown so far. 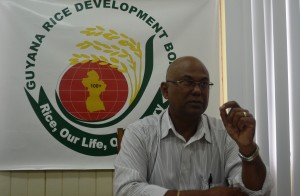 “I like to let the figures speak for themselves. We have already seen an increase in acres sown when compared to last year. So far we have recorded 225,000 acres as opposed to 180,000 acres for the same period of last year. As a matter of fact, we had projected 210,000 acres to be sown for this crop looking back at the weather impact on the spring crop for this year and last year,” Mr. Ragnauth said.

Although the general sowing period was delayed due to El Nino, the Rice Board still projected an increased in figures due to the number of farmers who returned to the lands.

“Nutrition is a very important key when looking at yields. Farmers are encouraged to employ best practices, not only during the sowing process but during the harvesting process as well. We also encourage farmers to cultivate using the 6-point system as this has shown remarkable benefits as it relates to increased yields. Even though farmers would have experienced losses last year, the figures shown have should that they were able to rebound well as it relates to sowing.” Ragnauth added.

Ragnauth also indicated that general low performing areas have seen increases in their production over the years.

Instances of Red Rice and Paddy Bug infestation have significantly reduced when compared to last year during the same period. Red rice and paddy bug infestation are known factors of diminishing yields. This, in turn, would not reflect the achievement of the plot. As a result, the research arm of the agency is continuously working to develop new and innovative ways to address this issue.

“If paddy bug and Red Rice are present, this will definitely affect the outcome of the 6points. We’ve started a while ago to develop new and innovative ways of addressing Red Rice and Paddy Bug. Once this can be addressed and we can help the farmers with a better level of control in the field, this will help to reduce the cost and increase the productivity of the plot.” Mr. Ragnauth said

Agriculture as a Business

The Board, in keeping with the trends and advances in the sector, have recognized the need to treat rice production as a viable and sustainable business. As a result, GRDB, through its extension services and field schools, educates farmers on the economic aspect of rice production by putting systems in place to educate farmers on the importance of production cost when compared to market prices. Farmers are also able to determine the different parameters that contribute to their production cost, yield and income generation.

“We have started exposing farmers to financial management to some extent, where we look at the cost of production. In fact, I’m sure if you ask a farmer the cost of producing for a bag of paddy he would be able to arrive at a price as opposed to years ago where farmers were unable to arrive at those figures… We also have practical exercises for the farmers at the field schools where we try to keep it simple for the farmers. They know the prices they are paid at the mills so they would want to relate it to the cost to produce a bag of paddy,” he said.

Despite the challenges plaguing the industry, the Guyana Rice Development Board (GRDB) has been employing new and innovative ways to ensure that the industry continues to progress. To this end, the Burma Rice Research Station continues to advance the cause by making available new lines of rice strands which are not only blast resistant, but tolerable to flood and drought.

“In fact, this is as a result of the number of research the Rice Board conducts annual…among the many areas, enhanced focus is placed along the line of  Plant Breeding, Agronomy, Entomology and Plant Pathology. These disciplines have seen the release of over five new varieties of rice, among them the aromatic strain, for commercial cultivation purposes all across the country,” the Extension Manager said.

Guyana’s rice industry has grown to such an extent that it now rates as the second most important agricultural industry, which enjoys the application of modern technology and years of research and technology transfer.