9,500 farming households to benefit from US $11M Farm to Market Access Road Project

The Agriculture Sector Development Unit (ASDU) today facilitated a close out ceremony for the completion of farm to market access road project in the main boardroom of the Ministry of Agriculture. The project, with an estimated cost of US $ 11M, saw the construction of four roads and several bridges which will see farmers having access to markets and improved facilities in Parika, Ruby, Laluni and Onverwagt. The project is expected to directly benefit over 35,000 persons comprising of approximately 9,500 farming households in the region. 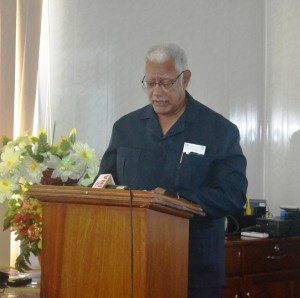 Agriculture Minister Noel Holder, in offering remarks pointed to the fact that investments in infrastructure are essential to increase farmers’ access to input and output markets, to stimulate the rural non-farm economy and vitalize rural towns, to increase consumer demand in rural areas, and to facilitate the integration of rural areas into national and international economies.

“As Guyana sought to expand agricultural output to meet its national and regional objectives, farm access roads and dams have been identified as inadequate in facilitating agricultural production and development in Guyana. It provides me much satisfaction to announce that the Farm Access Roads Project, funded by the CARICOM Development Fund (CDF) has achieved its goal of building better quality roads, allowing farmers easier access to farms/markets as well as construction of bridges and better drainage systems.” Minister Holder said. 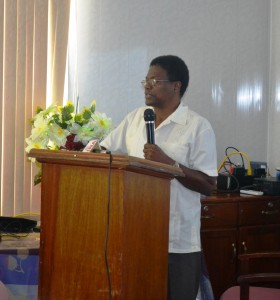 Also speaking at the ceremony, Chief Executive Officer of the National Drainage and Irrigation Authority (NDIA), Mr. Fredrick Flatts expressed pleasure with the completion of the project. “The loan was granted to the Government of Guyana by the Caribbean Development Fund on the 6th July, 2013. I am pleased to inform you that the project was completed ahead of time and within budget.” Mr. Flatts said. 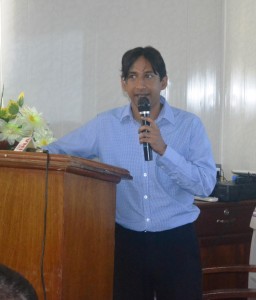 Additionally, a Monitoring and Evaluation consultant was involved in the project to ensure that, upon completion of the project, the policies that are developed to develop the agriculture sector were taken into consideration to ensure the full potential of the project was achieved. During his presentation, Monitoring and Evaluation Consultant, Mr. S.F. Kadir outlined that building roads are intended to contribute to the development of the agriculture sector and persons’ livelihoods.

“Monitoring and evaluation looks at how the project can best be completed. We worked with the contractors and the ASDU to ensure that the project reached its fullest potential. Over all, we’ve seen a vast improvement in the way persons traverse the village, specifically during the rainy season. Farmers are now able to get their produce out during these periods.” Mr. Kadir said.

Minister Holder also highlighted that, so far, there has been indications that the supply responses by small farmers have been positive due to the project.

“Our expectation that improvement of roads would nudge farmers to participate in market has led the sector to achieve approximately 25% to 50% increase in acreage of cash crop under cultivation, an expansion in the of production of fruit crop such as Avocado, Pineapple, Papaw, Sour soup and citrus, an introduction of high value crop grown in these areas such as Turmeric, Sweet pepper (bell pepper), Broccoli, Ginger and Parsley, easy access for buyers which resulted in more buyers accessing produce, thus serving as a stimulus for increased production and exporters and other market intermediaries, such as wholesalers, are now able to visit farms, make purchases and transport produce directly.” Minister Holder said.

With the construction of the roads, farmers are now seeing a significant reduction in post-harvest losses during transport which will enable them to enjoy better price for their produce. In addition to travel cost, travel time has been reduced by 80% which will stimulate a boost in agricultural development for the region.

Chief Executive Officer of the CARICOM Development Fund, Mr. Rodinald Soomer, released a statement commending the project. “The first cycle, which went towards a major road programme to improve access to farms and expanding agricultural production by bringing new lands under cultivation, received a high grade from independent evaluators and was recommended for expansion. The programme was assessed to be well managed, and to have been characterised by a significant level of local ownership and participation.” Mr. Soomer said.

Based on the successes of the project, the CDF has begun efforts to grant loans to fund other projects of such nature. Areas that will soon benefit from similar projects are Mocha, Triumph and Buxton.