The Food and Agriculture Organization (FAO) today signed its Four Year country Framework Program with the Ministry of Agriculture which outlines the FAOs partnership with the Government of Guyana.

The document  targets three main priority areas which includes but are not limited to Food and Nutrition Security, Sustainable Management of Natural Resources and Climate Change and Agriculture, fisheries, forest and hinterland development. 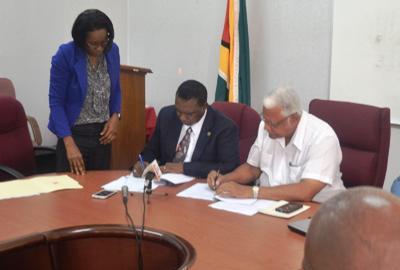 “This country programme was developed based on broad base consultations and focused on areas were prioritised we deem priority as we work together to push agriculture in the region” he said.

Meanwhile, Agriculture Minister, Hon. Noel Holder, welcomed the formation of the document noting that collaboration such as these will ensure that agriculture is given adequate attention it deserved.

He noted that the four country framework programme will not only make provisions for FAO to achieve it national development goals, but will also assist the Ministry of Agriculture in its efforts to eradicate hunger, food insecurity and malnutrition.

The FAO country framework programme is a planning tool, developed and co-owned and jointly implemented by the FAO and the Guyana Government. It defined the priority areas in which both parties agreed to work over the medium-term, in pursuit of national developmental objectives.