― completion scheduled for November this year

― more than 10,000 acres of arable land to benefit from swift drainage during the rainy season

Works are moving apace on the $414M four-door sluice at D’Edward Village on the West Bank of Berbice, Region 5 (Mahaica-Berbice). Works on the critical drainage infrastructure are almost 60 per cent completed.

The contractor for the four-door sea sluice for the Mahaica-Mahaicony Abary Agriculture Development Authority (MMA/ADA) is Courtney Benn Contracting Services Limited (CBCSL), which is being supervised by E&A Consultants Incorporated in the execution of the works.

Manager for Drainage and Irrigation Services at MMA/ADA, Mahendranath Ramjit said earlier this week that the contractor had completed the floor with installation of the concrete slabs and piles and other elements of the base and is currently constructing the walls of the sluice bringing it to about 60 per cent complete. 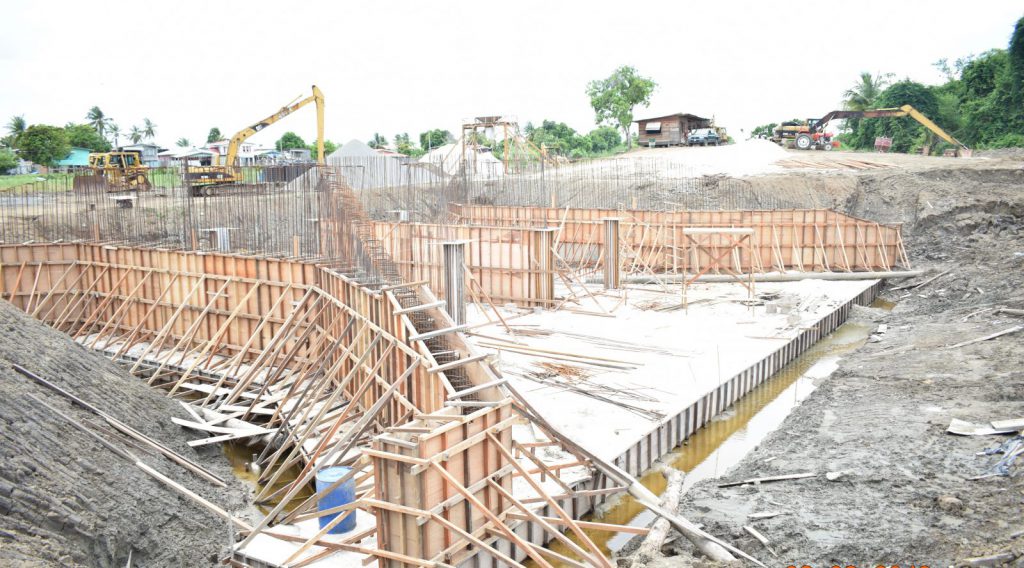 He said that casting of the walls and the revetments, as well as the construction of the gantry beams, are the major works that are required to complete the project for the November deadline.

The four-door sluice is being constructed not far from the three-door sluice, which has been in existence for over fifty years and will replace that ageing structure.

General Manager of the MMA/ADA Aubrey Charles recently explained that the new sluice would enhance drainage of all residential areas and agricultural lands along the coast between the Abary and Berbice Rivers known as the Abary/Berbice Sub-Region of Region 5.

The construction will provide enhanced drainage for more than 10,000 acres of land in the Abary/Berbice during inclement weather.

“The completion and operations of this sluice will boost farmers’ confidence in the drainage system and encourage them to be more productive; Agri production will greatly benefit in Region 5,” Charles said.