Today, several persons gathered at the Square of the Revolution in Georgetown to have their issues and concerns addressed at the ‘Government Comes to You’ Public Day Event.

The activity, which was organized by the Ministry of the Presidency, saw participation from various Government Ministries and Agencies, and adopted a ‘one-on-one’ approach to ensure those in attendance had the opportunity to have their needs heard.

Officials from the various agencies of the Ministry of Agriculture met with a number of persons who had questions and issues that were sector related. 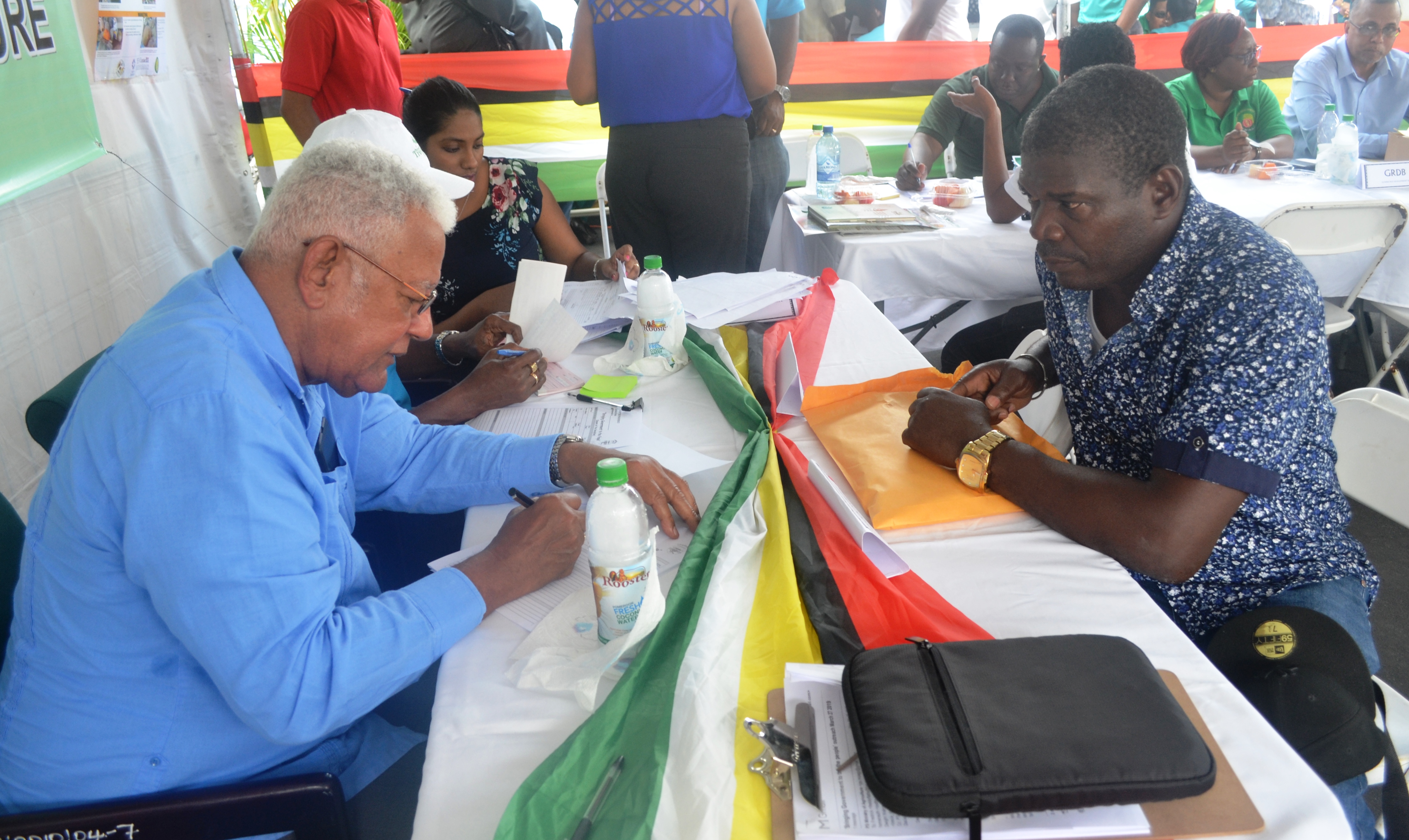 Agriculture Minister, Noel Holder during his engagement with an individual visiting the Ministry’s booth

During the engagement, Agriculture Minister Noel Holder, met with several persons who had issues pertaining to GuySuCo, agricultural land matters among others. When asked to comment on the activity, Minister Holder said that “the initiative was a good and timely one. We were able to speak to many persons who had several concerns. Information was gathered and interventions are being taken as we speak. Other issues that require follow-ups will be handled as soon as possible,” Minister Holder said. 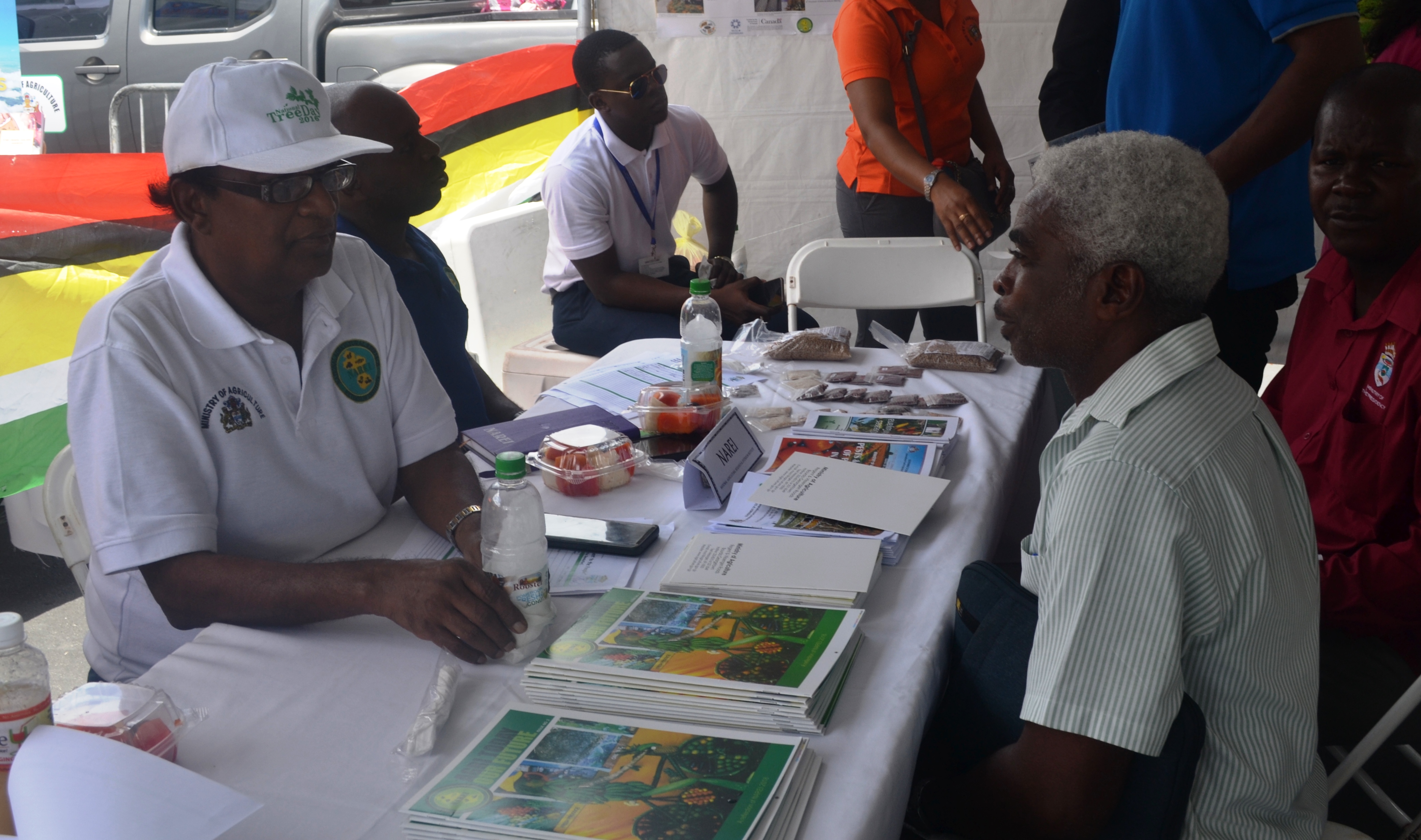 Dr. Oudho Homenauth while engaging an individual that visited the ministry’s booth

Officials from the National Agriculture Research and Extension Institute (NAREI) were also present at the Public Day activity. NAREI’s Chief Executive Officer, Dr. Oudho Homenauth indicated that persons visiting his section didn’t have any major issues, but rather, questions on how to improve their current agricultural operations.

“We had persons coming to us for advice on how to deal with Acoushi Ants and queries on the procedure to receive assistance to develop farms. We were able to distribute some vegetable seeds and ant baits and tell them about some simple ways to combat the ants. Persons interested in establishing farms were advised to register with the agency to receive extension services, such as soil tests, to know what are the appropriate plants to for that area based on the soil analysis,” Dr. Homenauth.

Farmers who had drainage and irrigation issues were able to engage officials from the National Drainage and Irrigation Authority (NDIA). 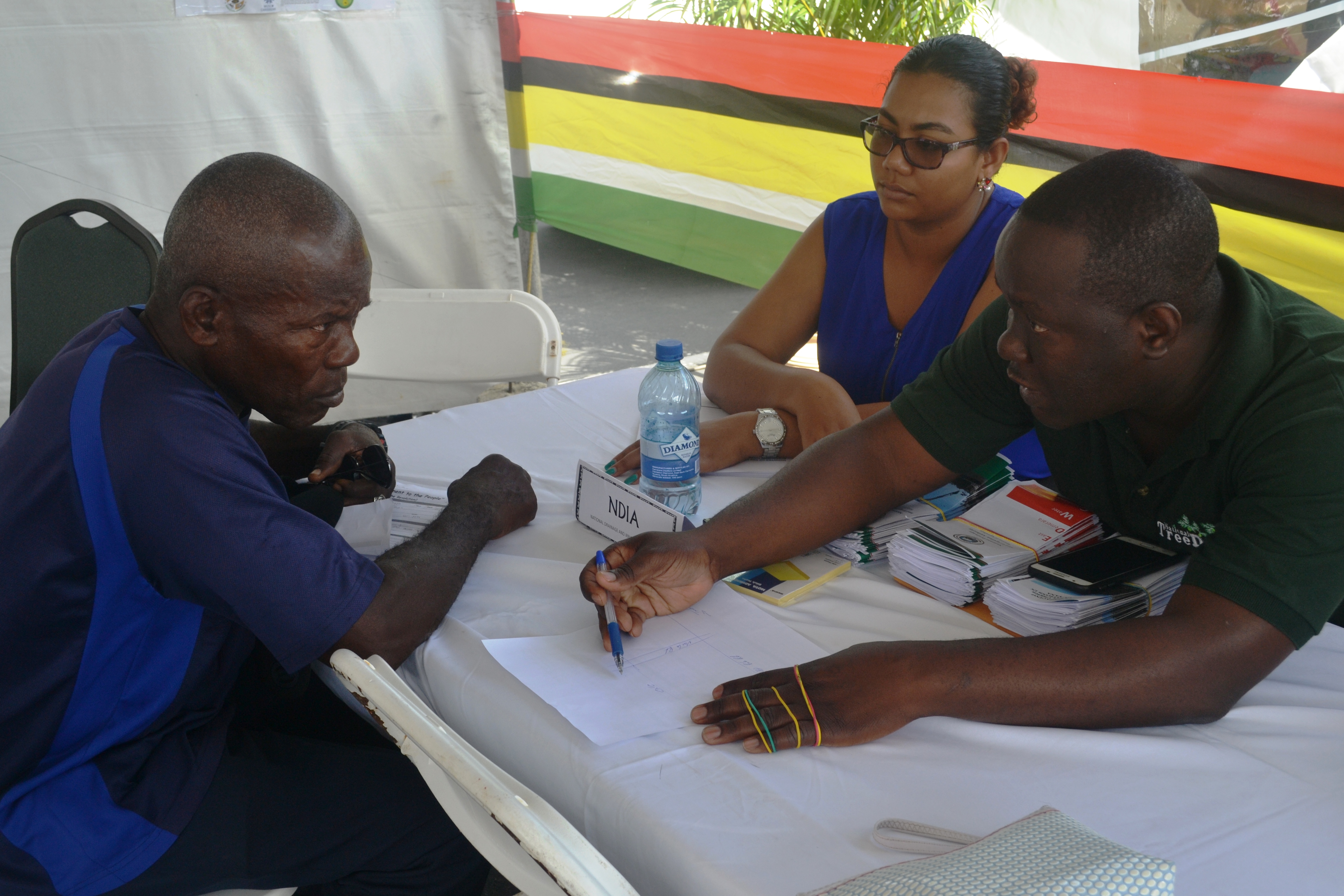 Timothy Innis engages an individual who visited the booth

NDIA Senior Engineer, Timothy Innis indicated that within the next week, engineers will be sent into each area to provide detailed reports to the Chief Executive Officer on how they can proceed with bringing relief to residents.

In addition, persons interested in rearing poultry were able to engage officials from the Guyana Livestock Development Authority (GLDA). The agency’s Chief Executive Officer, Nigel Cumberbatch, said that persons came from areas such as Rockstone, Canje, Berbice and Soesdyke for  information on how they can successfully and sustainable rear poultry and other livestock.

“We had quite a number of persons with a genuine interest in poultry rearing. We were able to give them some information and collect their personal details to conduct follow up engagements and visits to their areas to better assist them. Persons also enquired about extension services and we were able to provide the contact information for the extension officers in their specific areas,” Mr. Cumberbatch said. 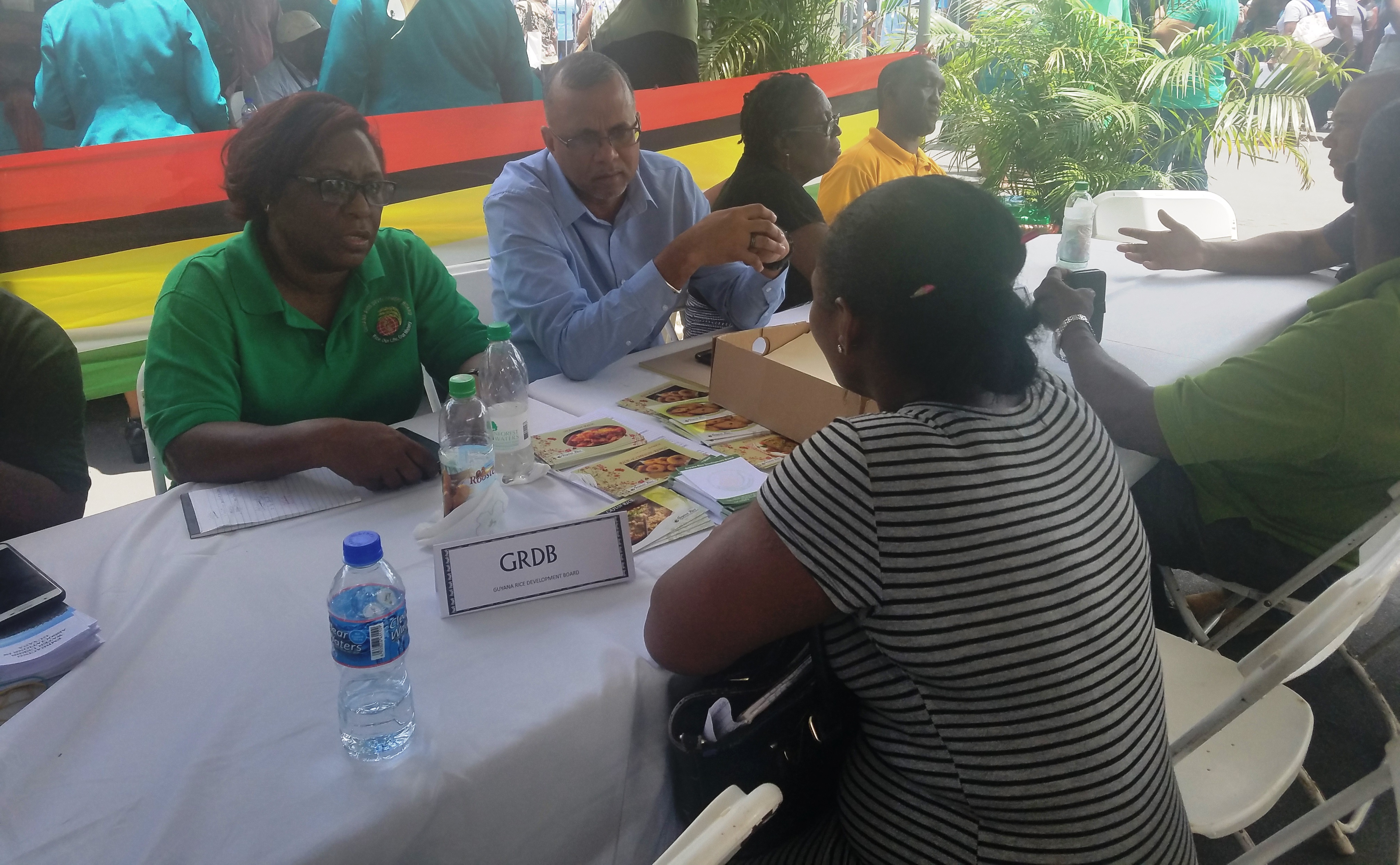 While the engagement saw no one voicing major rice issues, officials from the Guyana Rice Development Board (GRDB) were afforded the opportunity to engage with an individual who developed a device to assist small rice farmers with gathering paddy after it would have gone through the drying process.

Floyd London, the innovator of the device, met with Minister Holder and GRDB General Manager Nizam Hassan and told them about his invention. Both officials expressed interest in the machine and arranged for Mr. London to conduct trial exercises with farmers in Region Three during the coming week.

Agro-processors from as far as Mourica, Region One were able to engage officials from the New Guyana Marketing Corporation (New GMC) on areas for collaboration and the facilitation of training exercises for the production of jams and jellies.

General Manager of the New GMC, Ida Sealey-Adams said, “several persons visited the booth to get information on how they can commence exporting fruits and vegetables to several countries in the region and Canada. We also had an individual coming to us for guidance to develop and improve their branding and packaging skills for a speciality bread that they would have developed.” Sealey-Adams said. 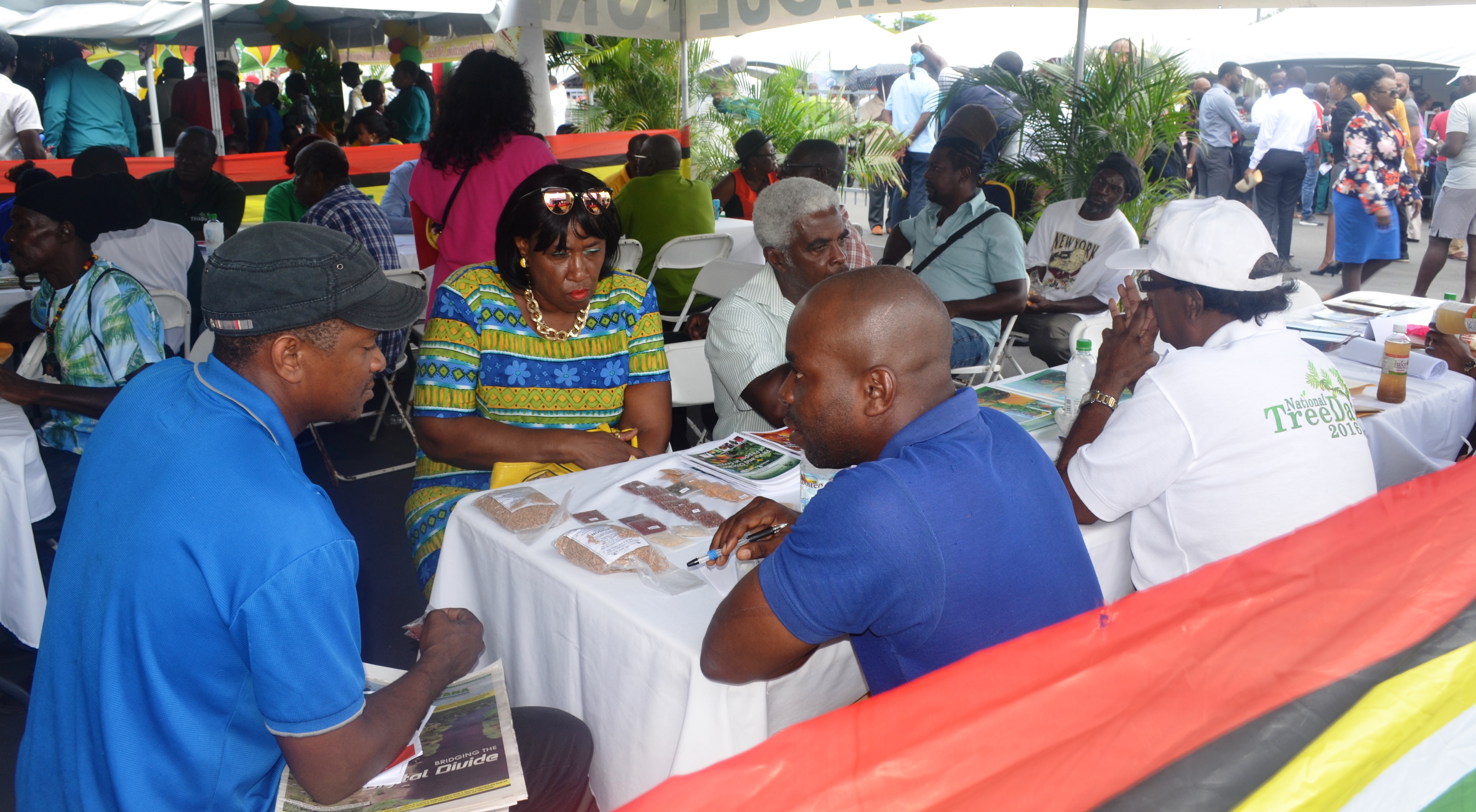 A section of the booth during the Public Day Exercise

She said that persons were told to visit the agency’s Robb Street office and fill out the necessary paper work. In relation to training, the General Manager indicated that the agency will be engaging the Guyana School of Agriculture and Ministry of Indigenous Peoples’ Affairs on ways the three organizations can collaborate to offer training to these groups.