Agriculture Minister, Noel Holder recently led a team to Buxton Village where massive works are being carried out under the Rural Agricultural Infrastructure Development (RAID) programme.

The project, which is being funded by the Caribbean Development Fund (CDF) at a projected total investment cost of G$318,600,000, was developed to further foster growth in Guyana’s agricultural sector.

The purpose of the outreach was to observe the progress made thus far in the project and to meet with farmers and distributed much needed planting material. 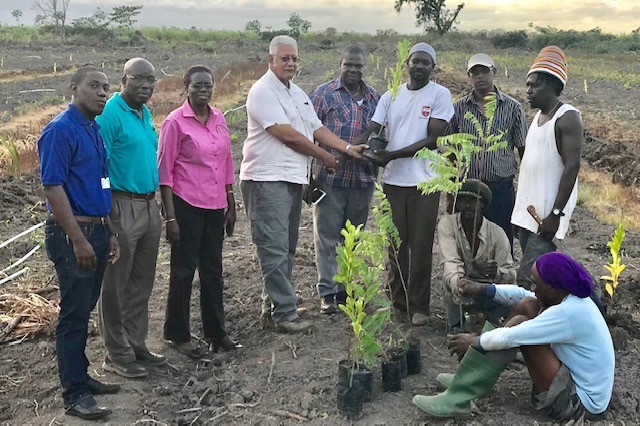 Picture shows Minister of Agriculture distributing planting material to farmers at the Buxton location in the presence of the Former Chairman of the Buxton/Foulis Neighbourhood Democratic Council (5th from left) Forbes Abrams, and the current Chairman of the Council, Mr. Neirpaul Purai (second from right standing) along with other officials from the Ministries of Agriculture and Finance.

During his interaction with farmers in Buxton, Minister Holder explained that agriculture has always been seen as an important element in the plan for reducing poverty.

“Agriculture is everywhere and can play a major role to bring the ‘Good Life’ to all involved in it. This village was selected because we see the potential of the farmers and we are ready and prepared to work with you and offer assistance in every capacity. This is not going to be a one off something as we plan to execute other projects in the area over time,” Minister Holder said.

The Agriculture Sector Development Unit, the section of the ministry responsible for overlooking and executing the project, conducted a series of assessments and consultations with farmers and residents in Buxton and a number persons indicated their readiness to return to farming in these abandon lands, provided that improvements are made to the existing D&I system.

Based on those assessments and consultations, areas that were earmarked for development under this project included improving management, infrastructure, agricultural technology, access to credit by small farmers, diversification, rehabilitating and maintaining D&I systems and construction of farm-to-market roads.

Works in Buxton under the RAID project will be executed in two phases.

Phase one, which included the rehabilitation of the D&I systems, which saw the excavation and rehabilitation of 29 km of irrigation canals, 42 km of primary drainage channels, the construction of a stoplog structure, a combined stoplog/aqueduct structure, a spill weir and the clearing of 180 acres of land which are now being prepared and cultivated by farmers.  Additionally, two Doosan Excavators, one Caterpillar Bulldozer and a tractor with implements were also procured for the execution of the project and continued use in the area.

Phase 2, which is involves field development, will see the 180 acres of land leased by the NDC to individual farmers being cleared for agricultural activities. Currently, approximately 120 acres have already been ploughed and chipped and 24 acres are already under cultivation.

To date, the Agriculture Sector Development Unit (ASDU) has distributed 1,200 coconut seedling and 2,402 citrus plants to over 24 farmers. A weekly delivery schedule is maintained which is expected to conclude by the end of March, 2019 for the delivery of the remainder of the 15,000 seedlings to be supplied.

Communities like Buxton, Mocha, Triumph and Ithaca have been identified for urgent intervention given the fact that, for over the last three decades, residents have experienced instances of severe flooding of the farmlands due to extreme storm events and inadequate drainage system.