Guyana is poised for once again becoming the bread basket of the Caribbean and further afield as plans are afoot to partner with a group of Brazilian investors for an industrialization of agriculture plan. This investment plan will translate into a mega state of the art farm in the intermediate Savannah, Region 10.

The Mano Julio group out of neighbouring Brazil, having already tested the soil type with a successful crop of corn and soy bean is expected to start cultivation again early next year. Upon full implementation of the project, the intermediate savannah will see some 5000 hectares of corn and soybean which will eventually translate to protein
(livestock) animal feed and fuel (biofuel). 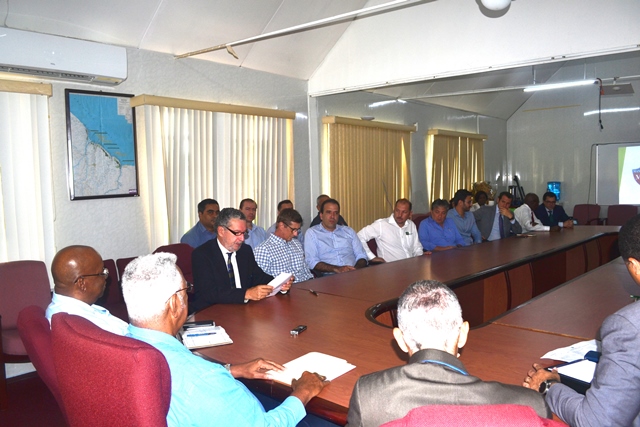 The vision of the investment group was laid out to the Guyana Government this morning in the presence of Ministers of Finance, Agriculture and Business, Hon. Winston Jordon, Hon. Noel Holder and Hon. Dominic Gaskin respectively in the boardroom of the Ministry of Agriculture. There were two video presentations in which the investment team showcased the transformation of the savannahs through the establishment of the mega farm concept.  Job creation, the transfer skills and knowledge, export to major markets throughout the Caribbean and EU are just some of the benefits to be derived from this industrialization of agriculture partnership between the Government of Guyana and a group of Brazilian investors.

Phase one will also include the development of 5000 of the 50,000 hectares targeted for development under the proposed project.

This will be followed by, the inclusion of value added products which will see the transformation of vegetable protein into animal protein and agro-industrial processing which include bio-ethanol production in the second and third phases of the investment.

Meanwhile, given the challenges of climate change and other traditional crops grown on the coastland, government has over the years been stressing the need to move agricultural production more inland, hence the decision to for the savannahs to be utilized. In the coming years the Region Ten intermediate savannah as well as the Rupununi savannah will be seen as the new agricultural frontier.  The investors outlined that the Ebini intermediate savannah was sought out given its strategic location which is only 100 miles away from a main port, which allows for ease of access to North America and European markets. Other key advantages of utilizing intermediate savannahs includes the similarities in soil type with which the investors are already working with, good water supply and rainfall patterns and ready access to the Atlantic through the Berbice river. 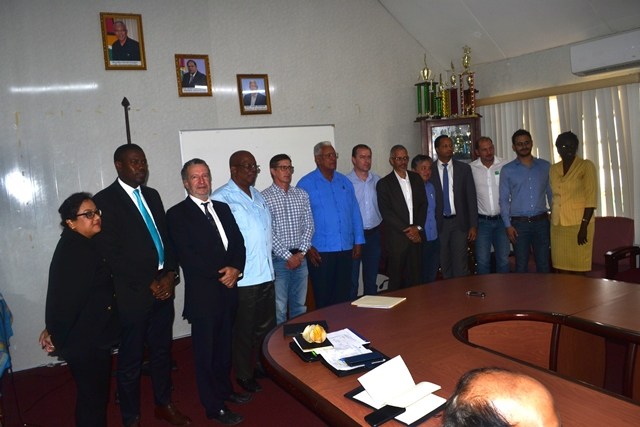 The billion-dollar investment also will see the creation of jobs for Guyanese, the transfer of technology and a boost to science-based agricultural endeavors such as the production of biogas, glycerin, research institute, and general infrastructural development. The investment will also translate to US$50 million of foreign currency earnings annually, 1000 direct employment and 3000 indirect employment with food security and agro-industrial process.

It is envisaged that once the project gets underway, it will make Guyana self-sufficient within the first year, and by the end of the second year, the yield will be more than enough to supply the regional and international markets.

“Our sustainable agriculture method will seek to integrate three main objectives, which will include, a healthy environment, economic profitability and social and economic equity,” Romeu Amaral, lawyer for the investors said.

Also birthing out of this investment will be contract farming for persons with large plots of land which are currently underutilized in the surrounding areas. Immediate and long term economic empowerment will be a positive spin off through this approach, thus improving standard of living for the people in the community.   It is also envisaged that with the economic opportunities that will abound in the area, it will become a magnet for Guyanese from all across the country. In additional talks are in progress with the Environmental Protection Agency to ensure this project is rolled out in keeping with strict environmental guidelines. The Ministry of Public Infrastructure will also be integrally involved as some key infrastructural project will be vital in aiding this project to meet its full potential.

Meanwhile, Finance Minister, Winston Jordon said he is enthusiastic with the prospects presented by the investors, promising government’s support. He, however, stressed that it is important for the project to move from the concept stage to actual implementation.

“Oftentimes, we see these wonderful presentations and after a while you hear nothing about it. This is a massive presentation which can materialize into something wonderful and I will commit our (government) full support,” the Minister said.

Minister of Business, Dominic Gaskin noted that the proposal is strategically aligned with Government’s trajectory for agriculture to become a major contributor to the continued growth of the economy. Currently agriculture contributes 16.2 percent to the country’s overall GDP.

In addition, to this Agriculture Minister, Noel Holder stated that currently there is litigating factors in place to address the issue of climate change, moving the country’s agriculture base to higher grounds.

“We are conscious of the fact that this is not rice and sugar area, this is a quantum leap and we need the assistance we can get, as the country in the long run will benefit,” Holder said.

The next step will see the formulation of a working group which will include representative of the Government of Guyana, Brazilian Embassy and Mano Julio investment group. Subsequently, the drafting of a MOU will be formulated.

The investment group included representatives from Granterra, NF Agriculture Inc, Castilho Construction and Mano Julio. On the Government side there were representative from Ministry of Agriculture, Guyana Lands and Survey Commission, Ministry of Infrastructure, Environmental Protection Agency and Go Invest.

On Wednesday November 28, the team visited the Intermediate Savannahs for a bird’s eye view of the land earmarked for development. Already a high level delegation visited Brazil and was given a tour of the operations in that country. The investment group will depart Guyana on Saturday.