With reports of higher yields from farmer’s paddy cultivation, over five hundred and thirty thousand (530,000) tonnes of paddy is projected to be produced. This is up nine percent from the 488,833 tonnes that were projected for the first crop of 2018. 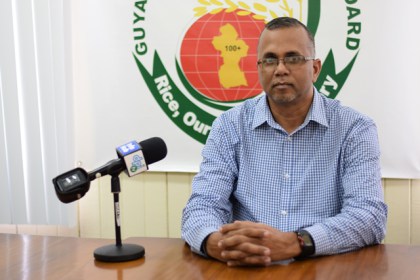 “Thus far, we’ve seen an excellent performance in the first rice crop of 2018. To date, we have harvested 59 percent across the country and we have seen an increase in yields. Yield increases have moved from two bags per acre to as much as nine bags per acre, this has been really good for the farmers since they also have been receiving higher prices for their production. So, overall, we have seen higher yields, better prices and also better paddy coming out of the fields, in terms of production,” Hassan related.

The General Manager also noted that there is much more to come since the projected yield for the first crop of 2018 was 5.6 metric tonnes per hectare, however, with the identified performance and average yield so far being 6.1 tonnes per hectare and one area reporting as much as 7.1 tonnes per hectare, the crop will close with record-breaking yields. As of 08-04-2018, 310,748 tonnes of paddy equivalent to 201,986 tonnes of rice has been harvested.

“This fares very well for the sector and very well for the industry because we’ve been getting increases in terms of inquiries and increased opportunities to market our products, and all of the increased production we have seen has been committed to markets which is a good thing for our producers and the business persons involved in the sale. All of the production has been committed to the market so we’re able to fulfil our markets.”

The harvest thus far is shown below

Over the years, the industry has been resilient, seeing significant increases in its first crops. Since the first crop of 2018 is yet to be completed, the over 530,000 tonnes of paddy projected to be produced is set to outstrip paddy production in 2017 which was recorded at 518,667 metric tonnes.