Members of the Corentyne Youth Farmers Corp Society will soon benefit from much needed drainage works which will allow them to harvest two crops per year.

During an outreach earlier today to Corentyne, Berbice, Agriculture Minister Noel Holder, who was accompanied by Junior Finance Minister, Jaipaul Sharma and other officials, indicated that his ministry will soon render assistance to the group given the fact that they have taken the initiative to maintain a functioning corp. 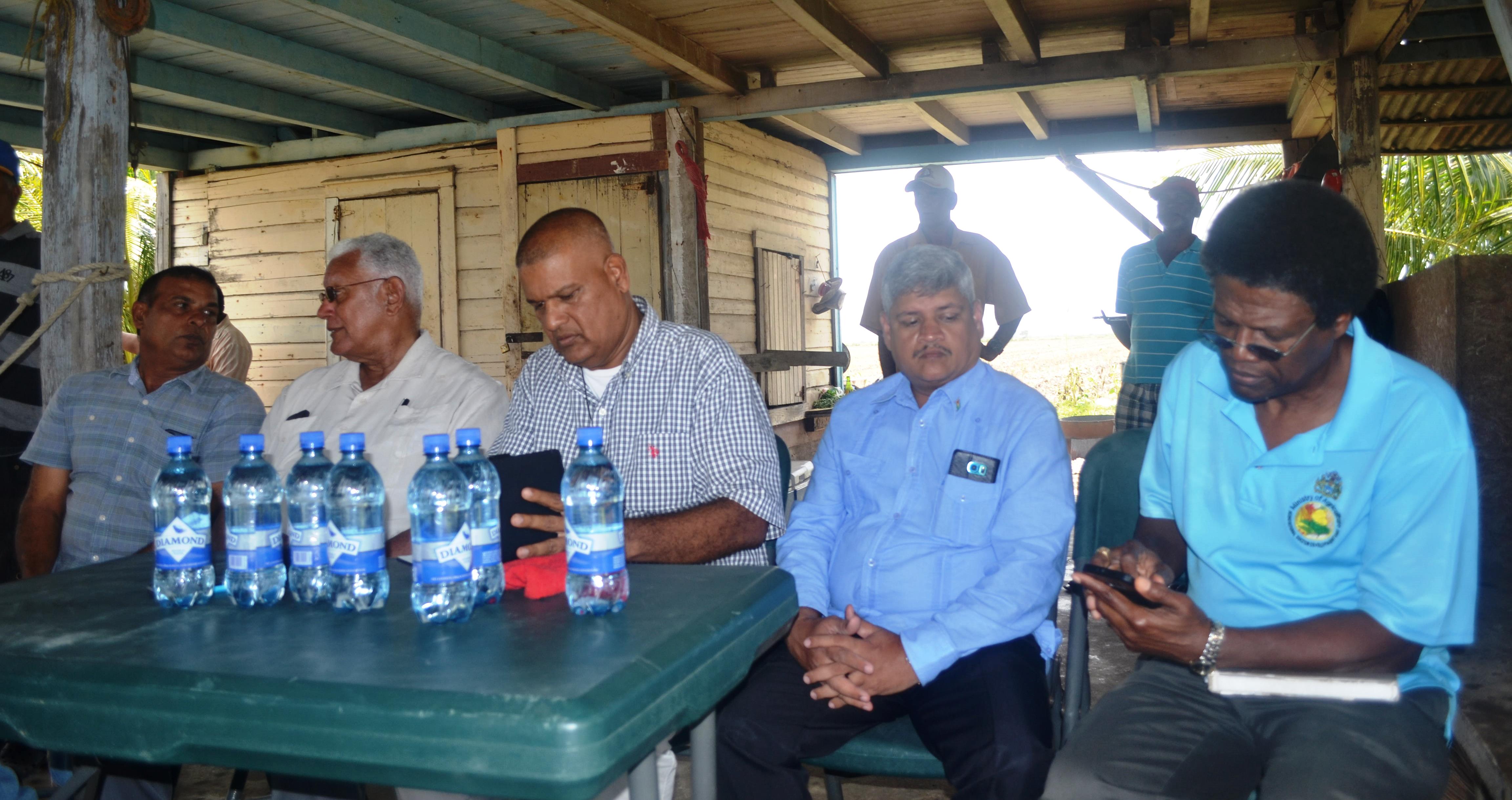 Minister Holder, Minister Sharma and other officials during the meeting

“In 2016, myself and another engineer visited the area to see how best we can assist farmers with drainage. A proposal was submitted and I am happy to say that we are now in the procurement stage. Once things remain on schedule, works are expected to commence within the next two months.” Mr. Flatts said.

Currently, farmers are only able to cultivate rice during the Spring Crop. Due to the lack of sufficient drainage, farmers are forced to skip the second crop since their fields are usually flooded. 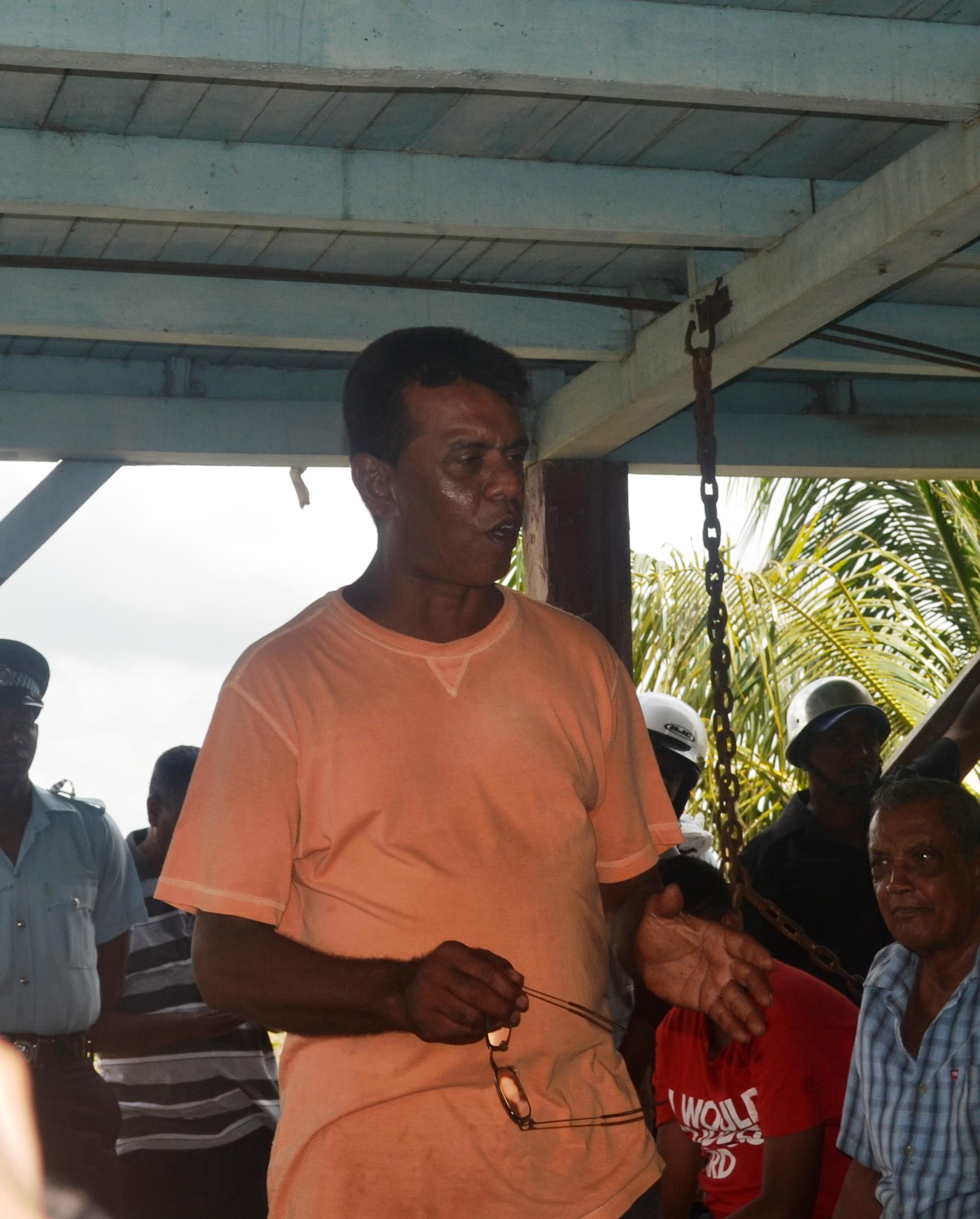 Chairman of the Corentyne Youth Farmers Corp Society, Amad Rajab, indicated that the members have invested hundreds of millions of dollars to develop the lands and are asking for further assistance from government to increase their cultivation.

“From the time we started to develop this place, it has cost each member approximately eight million dollars so far. Because we’re only getting one crop each year, we are asking for some help to dig out a canal so we can get better drainage. Our Corp is fully functional and every piece of land is noticeably under cultivation. Lack of proper drainage is the main element stopping us from achieving two crops per year.” Mr. Rajab said.

He also indicated that in ensuring the Corp functions correctly, members who do not comply with the rules and regulations are suspended and/or fined and lands rented to other farmers until the original owners are able to comply.

Agriculture Minister, Noel Holder spoke of the efforts by his ministry to make to more lands available to farmers with the aim of expanding production and productivity. This is in light of new markets secured by the Guyana Rice Development Board over the last year. 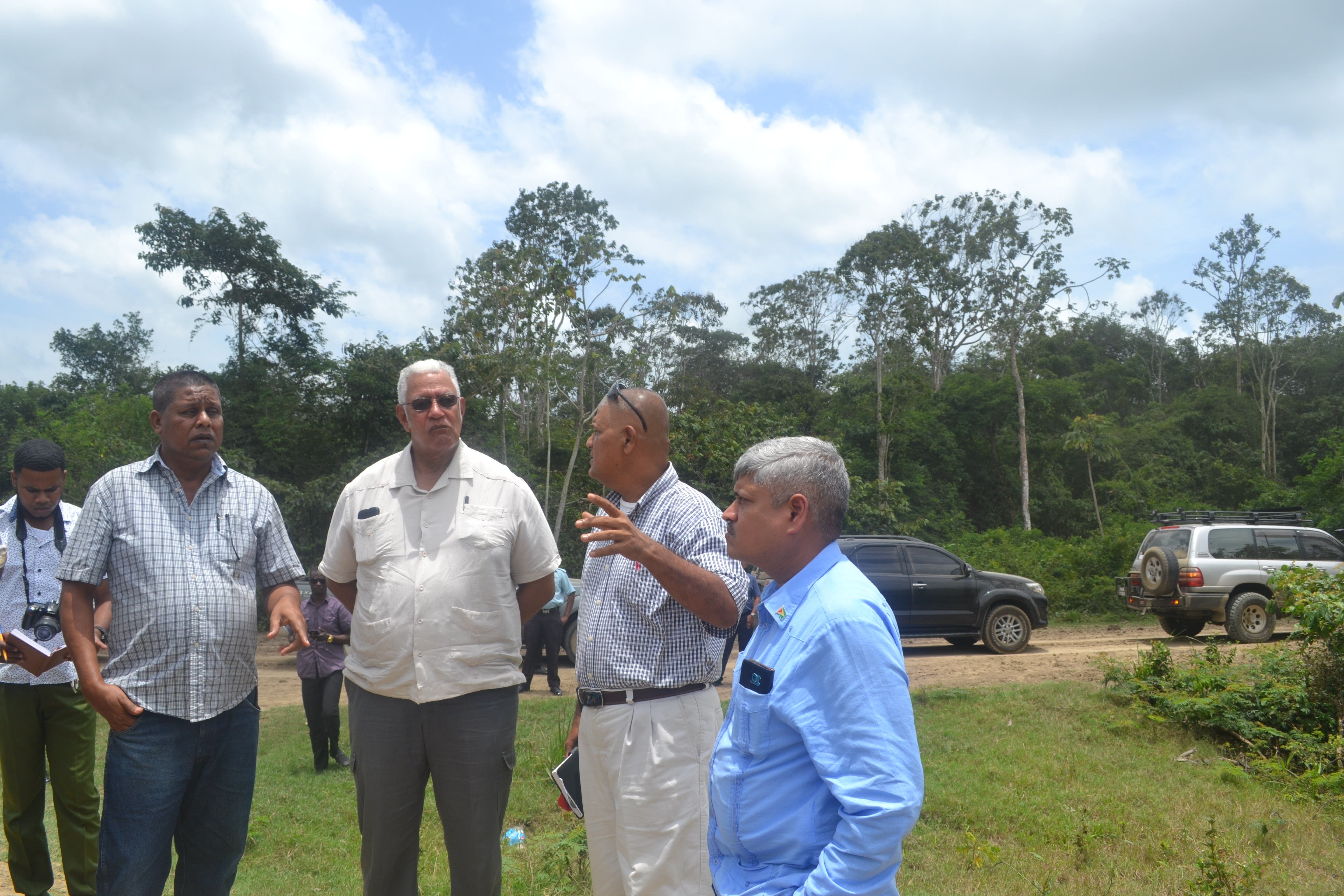 “Gone are the days when Guyana had a glut of rice with limited markets. Today we have an abundance of markets namely Mexico, Cuba and Panama which we have been successfully supplying, however, if additional lands are not developed or farmers do not return to their abandoned lands, there is a possibility that Guyana will not be able to supply the much needed markets;” the Agriculture Minister warned. 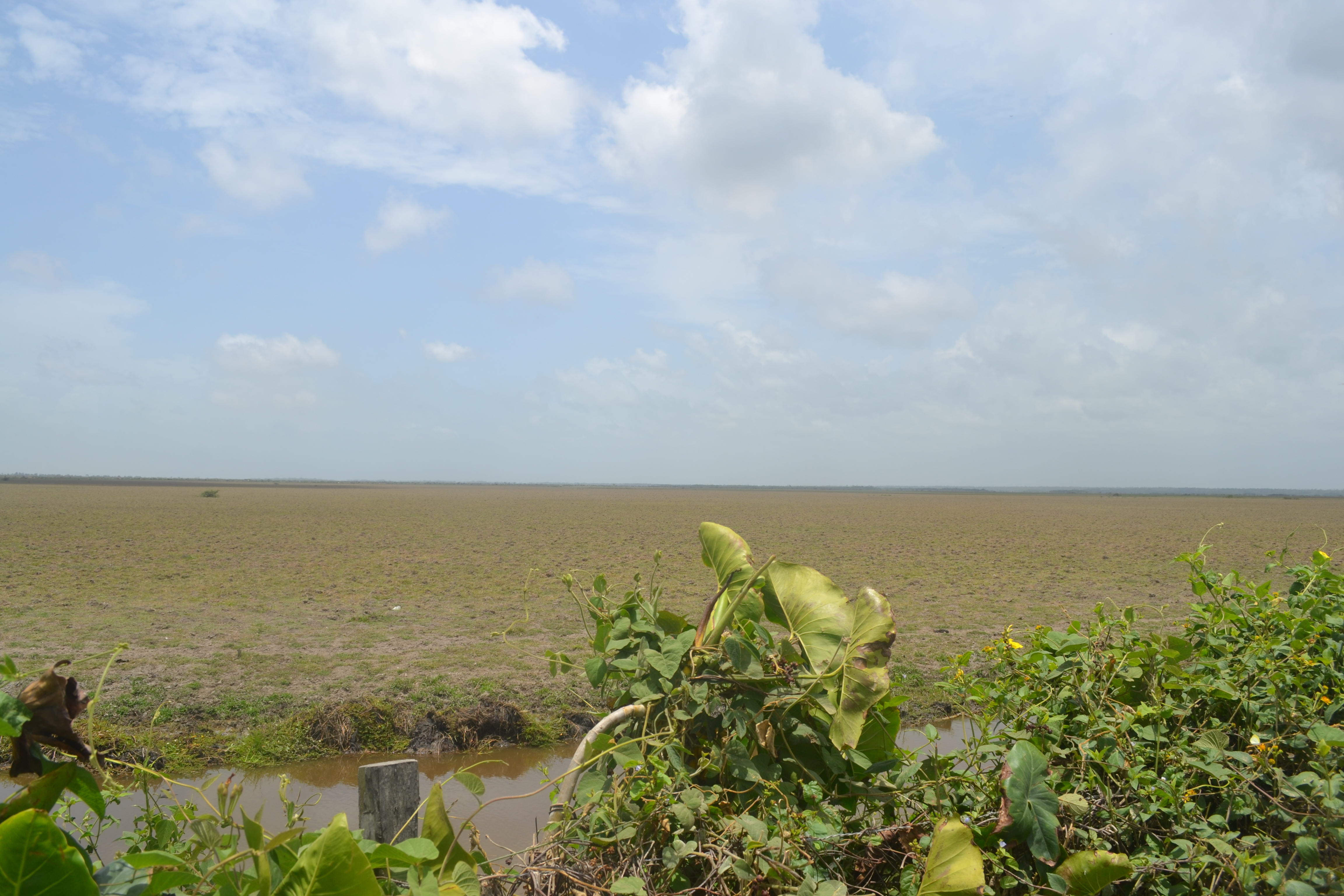 A section of the lands developed by the Corp

In addition to this, the Agriculture Minister spoke of the need for a change in farming practices.

“Guyana is being affected by climate change and as such, a number of drainage pumps are being installed across the coast. Currently this is being done to maintain production and not to increase production. We cannot continue like this, therefore, we need to expand our production by opening more lands for cultivation.” Minister Holder added. 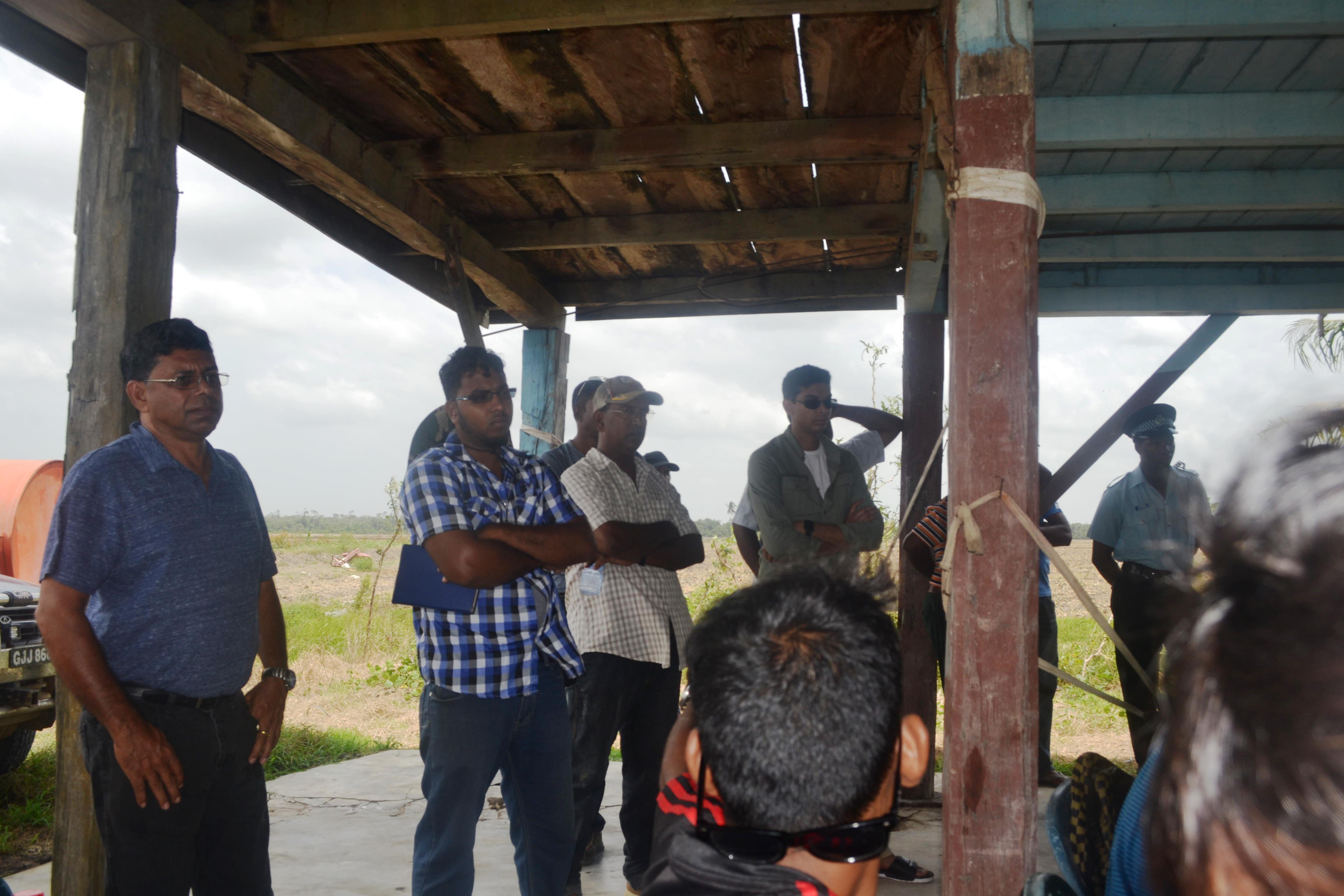 A section of the farmers during the meeting

The Corp, which was officially formed in 2008, comprises of 30 members who are involved in rice cultivation in the areas within the No. 52-74 Blocks in Corentyne. In addition to paying land lease charges, members currently are mandated to incur all costs attached to developing the thousands of acres lands they cultivate.

Junior Minister of Finance, Jaipaul Sharma said that he was pleased to see a Corp functioning so effectively.

“This initiative should be expanded. It is heartening to see people making a living in the lands once considered waste lands despite negative comments saying that the country is not developing.” Minister Sharma said.

He also said that he is currently looking at a proposal to construct an all-weather road but stressed the importance for mechanisms to be in place for rice and cattle farmers to co-exist.