The West Berbice Coast will soon have three additional sluices in operation for the upcoming rainy season. Initially, during the latter part of the previous rainy season, three gravity-operated sea sluices were installed to drain flood prone areas. 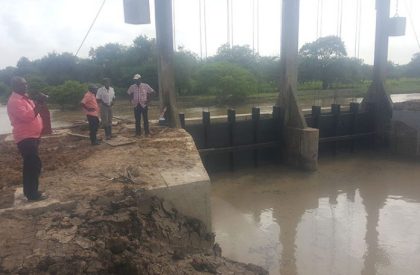 “Instead of three sea sluices in operation we will, for the first time, have six in operation for the upcoming rains and this will impact positively on the rate of rain water discharge in flood prone villages”, General Manager of the Mahaica Mahaicony Abary/Agriculture Development Authority (MMA/ADA), Aubrey Charles recently disclosed to the Department of Public Information (DPI).

Charles explained his optimism stemmed from the rehabilitation of three formerly condemned sea sluices along the coast by the MMA/ADA. These completed sluices are located at Trafalgar/Union, at Golden Grove /Lovely Lass and at Number 12 Village. Funding for their restoration was provided by the National Drainage and Irrigation Authority (NDIA) following the last June/July rainy season.

These three sea sluices in West Coast Berbice (WCB) up to the end of the last rainy season had a total drainage capacity of 2100 cubic metres per second (2100 m3/s). Their use in the upcoming rainy season will result in an estimated additional conveyance capacity of approximately 1300 cubic metres per second (1300 m3/s) for rainfall water drainage.

“It will definitely have some impact on how long the expected flood waters are likely to be a bother for West Coast Berbicians especially those in the Golden Grove, Lovely Lass, Union, Trafalgar and Tempie Villages known as the GLUTT Villages”, the MMA/ADA General Manager said.

He recently disclosed that the newly rehabilitated sluices – originally constructed in the 1920s and subsequently condemned – are to be made operational for the upcoming rainy season for the first time.  The decision to rehabilitate these sluices, was made by Minister of Agriculture Noel Holder during the floods on WCB, earlier this year.

The Agriculture Minister had given directives to engineers from the MMA/ADA and the NDIA, to examine the discarded sluices in order to ascertain which ones could be resuscitated.

The NDIA provided approximately $30M for the rehabilitation of the sluices., while construction staff from the MMA/ADA were involved in the restoration work.