Dozens of farmers, consumers and other stakeholders of the agricultural sector converged on Jubilee Square, Homestretch Avenue from as early as six hours today to participate in a Market Day.

The event was coordinated by the Guyana Marketing Corporation (GMC) and involved the participation of several agencies under the Ministry of Agriculture’s umbrella, as well as private producers and agro-processors.

According to Permanent Secretary (ag) of the Ministry of Agriculture, Joylyn Nestor-Burrow, the event is the second of its kind and is intended to showcase local produce. 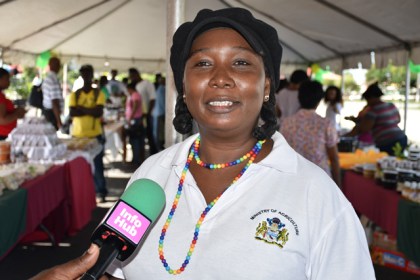 Further, Nestor said that while this Market Day is part of the Agriculture Month activities, plans are being explored to host similar events throughout the year.

“We plan to have it for public servants, where we would be able to sell at reasonable prices to meet their pockets; maybe every six months we may have it where we invite public servants. Maybe not here but in the Ministry’s compound,” Nestor told the Department of Public Information (DPI). 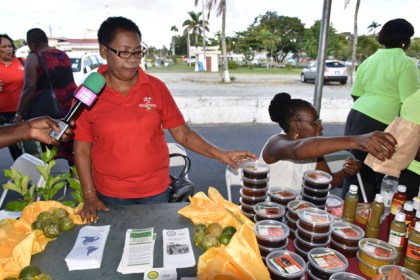 In addition, Public Relations Officer (PRO) of GMC, Ivory Duncan, said in keeping with the marketing agency’s responsibility to coordinate and facilitate the development of quality nontraditional agricultural produce and products, the event was organised to give the public the opportunity to be informed about what is available on the local scene and for them to make purchases.

The Public Relations Officer commended the interest shown by the public and said she was delighted to see the desire to buy local. “The response has been good, and we commend them for being here early and ready to buy local.” Duncan enthused.

Meanwhile, vendors and shoppers alike were pleased with the initiative shown by the agencies of the Ministry of Agriculture.

Alison, a shopper told DPI, “The experience is very good, prices are very cheap and the quality of the produce very good. They can do this more often and bring out more provisions and fruits. It will help people to save a lot of money.” 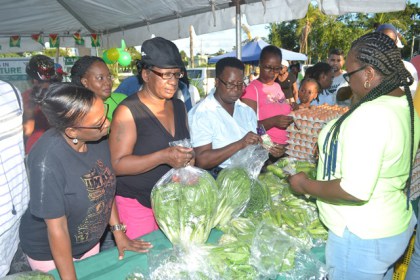 A group of buyers flock the GSA fresh produce booth.

In the same vein, Denise Spencer, Chairperson of the twelve group, Women’s Agro-processor Network said the event presented a wonderful opportunity for them to showcase and sell their locally produced medicinal and food products.

“I have found that this venture is very encouraging. I have met persons this morning who have never ever tasted our products, so I had to introduce them to some of our samples. I think it is a very good initiative since people are being more informed.” Spencer said.

Among the participants were the Guyana School of Agriculture (GSA), Guyana Livestock Development Authority (GLDA), Simone Gibson, manufacturer of “Country Style” coconut biscuits, Leisa’s Salon and Beauty supplies and the Red Basket fudge, which manufacturer Gordon Hunte said was started in 2007, out of a bedroom and can now be found on the shelves of all the leading supermarkets locally, while providing employment for himself and two other individuals.