Guyana is one step closer to producing locally manufactured fish food. Efforts toward this end are being spearheaded by the Ministry of Agriculture, Satyadeow Sawh Aquaculture station at Mon Repos, East Coast Demerara (ECD.)

Fisheries Officer, Nieketa Dookie said that the production of fish food from local inputs is one of three experimental projects being undertaken by the aquaculture station. 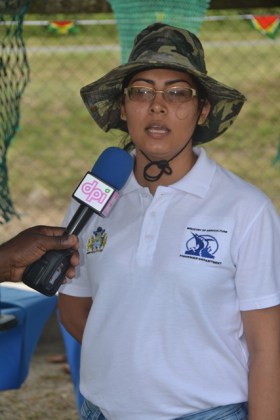 “We had two feed trials. One concerns us producing a locally made feed and comparing that to the imported.” Dookie explained. He added that the other feed trail is aimed at investigating the effect of alternate days feeding.

In addition, Dookie who has responsibilities for aquaculture said the research on producing locally manufactured fish food is being aided by the Government of Japan.

“We worked along with a Japan International Cooperation Agency (JICA) volunteer this year to produce a local feed. We were successful in terms of the feed’s physical characteristic remaining intact, that is it won’t disintegrate too quickly into the water. That trial is ongoing,” the aquaculture specialist explained.

The production of fish food locally will be done using local inputs, and will aid in government’s drive to diversify agriculture in the hinterland regions and reduce cost of production.

“We would be sourcing local ingredients that are pretty dominant in areas so that they can use it as fish feed, especially in interior locations where importing a commercial feed would be very costly. Utilising those ingredients that are local to them in a fish feed to promote fish rearing activities would be a boost.” Dookie added.

In 2001, the Mon Repos Aquaculture Station was established with the main aim of producing fingerlings and advancing aquaculture technology. The station consisted of one residence, one laboratory and ten concrete ponds. The station was dedicated to slain Agriculture Minister Satyadeow Sawh in August 2009.