The issue of Praedial Larceny and its negative impact on local farmers was the focus of a workshop held at the Guyana Livestock Development Authority (GLDA) headquarters in Mon Repos, East Coast Demerara.

The GLDA, Inter-American Institute for Cooperation on Agriculture (IICA), Caribbean Community (CARICOM), Law Enforcement from Jamaica and local farmers have joined forces in an effort to tackle the theft of farm produce. 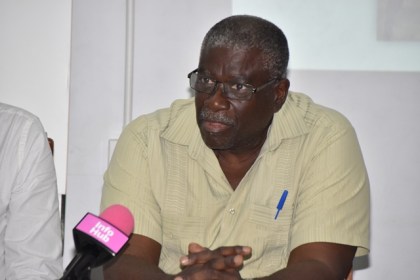 Chief Executive Officer of GLDA, Nigel Cumberbatch said that the Authority views the act of praedial larceny as a serious offence and is committed to supporting any initiative that seeks to protect farmers from losing their livestock.

He stated that “we are committed to ensuring that if we cannot eliminate larceny of agricultural products, we can at least reduce it to the point where it does not affect the farming community.”

CARICOM representative, Nigel Durant observed that agriculture is a business and should be treated as such. To that effect, Praedial Larceny severely impacts the profitability of businesses and the incentive to continue in the field. With the exception of Jamaica, most other member states have not successfully addressed the issue.

“This initiative that you are involved in right now is an outcome of the deliberations and discussions that are being held at the regional level… this is the beginning, the transfer of best practices I think is essential element” Durant explained.

Cecil Persaud, representing the Minister of Agriculture, emphasised the importance of legislation to address the issue and suggested the implementation of stringent penalties and fines be placed on persons who commit the act. He referred to the example of Jamaica, where persons found guilty are liable to fines up to three million Jamaican dollars, which is equivalent to over six million Guyana dollars.

“We must have a system where we can have justice very quickly. We must have both the investigative aspects and the adjudicative aspects made up in such a manner that things can be expedited and farmers are encouraged to report incidents of Praedial Larceny.”

It was recently announced that the government will table a bill in the next parliament to address this issue. While legislation exists, there is a greater need for enforcement to stem the theft of agricultural produce.