A Regional Agricultural and Commercial Exhibition (RACE) has been launched in Region Four with the ultimate intention of showcasing the region’s diversity in business, agriculture and economic development. The exhibition will be officially facilitated during the period November 24 to 26, 2017 at the Lusignan Community Centre Ground.

The launch of this event promises to be rewarding and enlightening as persons involved in agriculture and commercial activities have been invited to participate. Regional Chairperson of Region Four Regional Democratic Council, Genvieve Allen said that it is catered towards the continued promotion of environmentally friendly economic agricultural fronts.

Allen added that it is hoped that potential entrepreneurs seize the opportunity to exhibit their skills. “The avenues that are opened to our people in this new dispensation must take into account our young, our skilled, our developing and emerging entrepreneurs. In particular, we want to ensure that avenues are opened to not only producers and businesses but the consumers who complete the trade chain.”

Allen remarked that this exhibition is the first of its kind in the region, and the launching of the event comes at a time when the RDC has “recognized that (the) country is being propelled in a direction that demands fresh and innovative ideas and ways of ensuring sustenance and development.”

Minister of Communities, Ronald Bulkan lauded the event by quoting President David Granger saying that the launch represents an example of the administration’s delivery of decentralisation and the empowerment of all people. 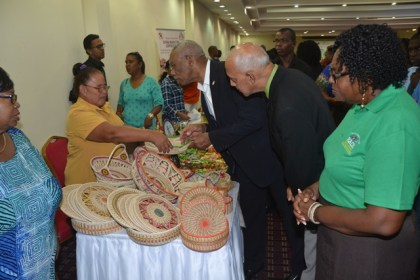 His Excellency President David Granger, Minister of Communities, Ronald Bulkan and Regional Chairperson, RDC#4, Genevieve Allen perusing some of the exhibits on display at the mini exhibition of launch.

“As President Granger has stated at a previous RACE, at which he spoke and I quote ‘this is not something ornamental, it is something that your people want and you have an economic opportunity and by having this RACE which would attract people even those from Georgetown and other towns,” the minister explained.

He added that one of the central purposes of the regions in Guyana is to stimulate economic activities while increasing employment in the economy through regional participation.

By extension the RACE is expected to attract potential local and foreign investors. It also seeks to showcase a wide range of agricultural products especially those that offer an eco-friendly platform, from as early as production to the finished product. The launching of similar exhibitions in all regions is expected to be rolled out shortly.