The government was presented on Friday, with its CODEX procedural manual and its Codex Strategic Plan at Cara Lodge, Woodbine Room. CODEX addresses the collection of internationally recognized standards, codes of practice, guidelines and other recommendations relating to foods, food production and food safety.

The project undertaken by the Chile Codex coordinator for Latin America and the Caribbean, Chilean Food Safety and Quality Agency (ACHIPIA) who have collaborated with the Inter-American Institute for Cooperation on Agriculture (IICA) and the National Codex Committees, aims to strengthen the capacity of the participating countries to improve the functioning of CODEX at the national level. 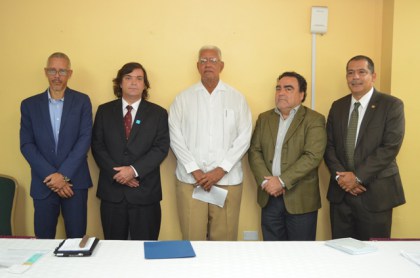 Minister of Agriculture Noel Holder expressed his gratitude towards Chile, IICA and the United States for their support upon reaching the final stage of the project. He noted the venture can be considered a stepping stone for Guyana towards ensuring the quality and safety of food for consummation and exportation.

“The Government of Guyana through the Ministry of Agriculture is mandated to ensure that the country is food secure, the ministry has since developed a ten-year Food and National Security Strategy (FNSS 2011-2020) which embraces three key goals,” the minister highlighted.

Minister Holder observed that agriculture plays a significant role in the achievement of food and nutrition security hence the need for expansion. “In lending support to CODEX requirements, the Ministry of Agriculture has since taken steps to ensure that food production has been backed up by guaranteed food strategies, good agriculture practices especially through improved soil strategies, extension practices, livestock and breeding enhancement programmes,” the minister explained. 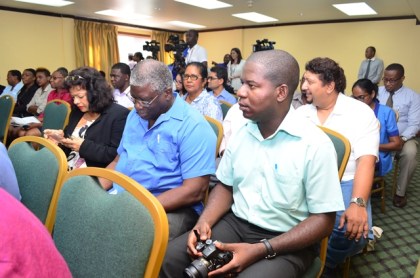 A section of the persons attending the CODEX structure workshop.

Holder stressed that appropriate utilisation of food are encouraged, hence the need to continue to support capacity building of agro processors to meet international and quality safety standards of foods.

Minister of Business Dominic Gaskin explained the development and the use of standards are driven by the need to do business hence the intervention. He noted that harmonised standards can create a level playing field in which goods and services can be traded internationally.

Chilean Ambassador, Claudio Rojas Rachel said that a teamwork approach was necessary for this project. He noted that Guyana has all the components to become agriculturally self-sustaining, though it faces some challenges such as technical capacity, innovation and engineering, Chile is more than willing to provide that assistance.

“There is no doubt either that we need to ensure food security for a bigger segment of the population worldwide and in that sense, we see an opportunity for Guyana to turn itself into playing a key role… in the sense of food security for the region and third world markets, ” Ambassador Rachel pointed out .

Representative of Inter-American Institute for Cooperation on Agriculture (IICA), Wilmot Garnett promised to, “remain committed to work together to ensure full use of Guyana Codex procedural manual and active participation in the Codex Strategic Plan”.

The two-year funded project was titled “Strengthening the functioning of the national Codex structure in Jamaica, Guyana, Trinidad and Tobago, Saint Lucia and Suriname”. A series of workshops and consultations were held to establish a CODEX manual and strategic plan for its participating countries.

Guyana established a National CODEX Committee in 2000 under the guidance of the World Health Organisation/ Food and Agriculture Organisation (WHO/FAO) food standards programme which represented a multidisciplinary and multi-sectorial body.