The Guyana Rice Development Board (GRDB), on Friday conducted a four-leg outreach in Corentyne, East Berbice to boost rice production and productivity while addressing other pressing issues affecting rice farmers in Region Six. 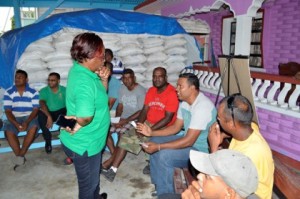 The Department of Public Information (DPI) accompanied the team to capture some of the farmers’ concerns. The team consisted of an Entomologist, Agronomist, quality control manager, extension officers and other resource personnel attached to the GRDB.

Farmers of Crabwood Creek, Lesbeholden, BlackBush Polder, Lancaster and Canje Creek used the opportunity to voice their concerns on several issues. Most pressing was the problem of drainage and irrigation of the rice farm lands.

Crabwood Creek, farmers requested that the dams in the farming areas be fixed, since this will aid with access to the farmlands. Additionally, they urged that the drainage and irrigation(D&I) structures in the area requires be fixed immediately.

The farmers said they felt neglected because they are continuously affected by the badly damaged D&I structures. In this regard. GRDB General Manager, Allison Peters noted that this particular grievance will be forwarded to the head of the National Drainage and Irrigation Authority (NDIA) for swift action to be taken.

“I have promised to speak with my fellow colleague on this matter to see what help can be given to the farmers in the area especially in the Number 51, the Lancaster area. The farmers were speaking about water not coming to them at the right time and that is causing them to lose their crop and to be farming outside of the cropping season.” Peters explained. 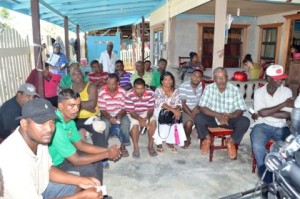 Another issue highlighted was that of prices offered to farmers for paddy. “We need new seed paddy, whatever they got there, some doing fairly well but in terms of pricing if we get a variety that can, you know give more yield well the farmer gonna get more money and rice is all about cash,” one farmer noted.

GRDB General Manager, Allison Peters pointed out to the farmers that, “remember, government don’t set price. What you find happening is that the prices are based on what the exporter or the miller is getting in the marketplaces. If he is getting a high price, most times he passes it on to the farmers and also there must be great need for your paddy. If he needs the paddy … then you know he will pay more to get all because he’s not only miller in the region.”

She also reiterated that Region Six rice farmers are being offered the best prices for rice paddy in the entire country; as much as $ 2700 per bag.  This is in comparison to Region Two farmers who are offered average prices of $ 1700 to $ 1900 per bag of paddy.

Paddy quality also is a major determining factor in the setting of prices by millers and must be of a requisite standard. Members of the visiting team advised that farmers must follow farming procedures and also identify most suited varieties which would ensure increased yields.

More yields will guarantee a lower production cost which will mean better returns on produce. While pointing this out, the team had realized that farmers had been accessing a smuggled variety of seed paddy. This variety the farmers called ‘1oo days’ is a high yielding brand which requires low cost maintenance and attention.

The General Manager pointed out that, “The ‘100 days’ is illegal and you know, not us but NAREI (National Agricultural Research and Extension Institute) is responsible for the importation of seed and agricultural fruits and if you are caught with a variety that you are not supposed to have, you know very well what can happen. You see, when you bring a variety in that is not tested and no research has been done on it we don’t know what it is bringing, if it can wipe out the other varieties that we have here.” 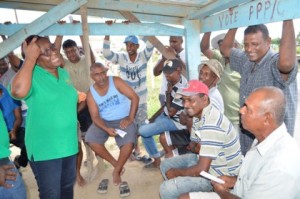 However, some farmers have concerns with the varieties that are obtained from the research station at Burma.

“Some of the issue with seed paddy not germinating, those are directly related to GRDB and management will deal with those issues. We have started to address sowing our seed paddy a little earlier so it would get to the farmers in time for sowing of their plot in the other season.” Peters explained.

Basdeo Sriram, a farmer of Lesbeholden, BlackBush Polder said, “Before we did cultivation (for the just concluded crop) I even said that they should give out some fertiliser so farmers are being asked to do an interview and I was one of them and I went there and I did the interview and up to now… I’m still waiting for the fertiliser.”

The GRDB General Manager explained that fertilisers are issued to large scale farmers on credit based on approval by the GRDB and approval is only given based on the farmers’ ability to repay within the stipulated time frame.

Regions Two, Three and Five have been targeted. For other outreaches scheduled in the upcoming weeks.