The livestock industry contracted by 10.9 percent, in the first half of 2017, due to heavy rainfall severely affecting production, especially in the second quarter. This is according to the Ministry of Finance’s mid-year report for 2017.

The Ministry of Agriculture is hopeful for an improved livestock sub sector by the end of 2017, despite contractions during the first half of the year. 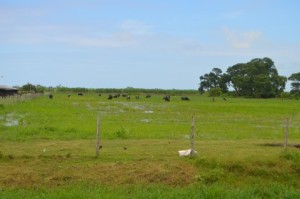 Cows grazing in an open pasture.

At the beginning of the year the Ministry of Agriculture announced that there were plans in place to ensure that output and productivity of this sub-sector is increased through a number of measures that were set to be implemented by the Ministry.

The early rainy season began sooner this year affecting the extension of the entire agriculture sector and its production outputs. However, in some other areas growth and improvement were evident.

According to the mid-year report, during the second half of the year measures will be robustly adopted to ensure contraction in this subsector ceases. Cattle breeding will continue through the artificial insemination programme in order to improve production traits.

The Genetic Improvement Unit of the Guyana Livestock Development Authority (GLDA) will maintain its support to farmers in all five coastal regions. Further, emphasis will be placed on increasing the production of ducks through the improvement of laying, incubation, and fertility rates.

The government’s intention is to build a more robust and competitive livestock sub-sector, focusing on animal health through greater disease surveillance and control, genetic improvements for enhanced productivity and profitability of cattle and animal production.