Agriculture Minister, Noel Holder today met with a team from the World Bank’s Social, Urban, Rural and Resilience Group to discuss a number of important issues relating to climate change and development within the agricultural sector. 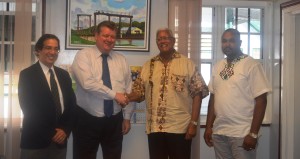 Among the issues discussed were the status of the Flood Risk Management and Cunha Canal Rehabilitation Projects which are being executed by the Agriculture Sector Development Unit (ASDU). At the meeting, newly appointed Senior Disaster Risk Management Specialist, Mr. Doekle Geert Wielinga who replaced Mr Pierre Nadji, World Bank Senior Country Director, was introduced to the Agriculture Minister, who announced that additional funding could be made available for critical drainage and irrigation needs.

Among the works which will be done, would include the construction of dams along the East Demerara Water Conservancy (EDWC) and Pump Stations at critical locations.

Additional projects that are being developed for the agriculture sector between the World Bank and the ASDU were also discussed.

Agriculture Sector Development Unit’s Project Coordinator, Dhaneshwar James, indicated that these projects, which will be executed by ASDU, will be completed by the scheduled January 2019 deadline.

Agriculture Minister, Noel Holder, reiterated the importance of projects of this nature in Guyana’s fight to combat climate change, adding that his ministry looks forward to continued collaboration with the World Bank in order to further advance agriculture in the Guyana.

He spoke of the need to have effective drainage and irrigation structures so as better support farmers’ livelihood.

“Being able to provide the necessary services whereby, farmers’ livelihood are protected is one of the mandates of the ASDU and the NDIA by-and-large and something the Government of Guyana is committed.” the Minister said.