The second shipment of 17,000 tonnes of paddy destined for Mexico left Guyana this afternoon and Mexico’s Ambassador to Guyana, H.E Ivan Roberto Sierra, is adamant that  strong relations the two countries share, will only continue to grow paving the way for more fruitful relations.

In an invited comment, Ambassador Sierra lauded the efforts of the Guyana Government in ensuring that all the requested requirements of Mexico were met in the shortest possible time. 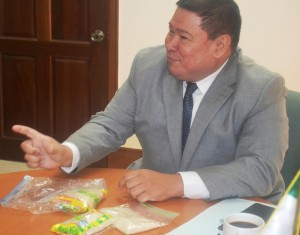 “It is remarkable that from the business forum held in Mexico in March of this year systems were fast-tracked allowing for the start of trade in a matter of mere months. Thanks to the efforts  of the players in both countries,” he said.

The Ambassador singled out the role of the Guyana Rice Development Board (GRDB) in ensuring that all the necessary paperwork and general requirements of the Mexican market were finalized with the local producers.

He added that the two country have started out on what will be a very fruitful relationship. The trade in paddy and rice could be just a start of a long-range of products that could be sold on the Mexican market.

“I have showed them the quality of packaged rice on our market shelves in Mexico and I have told them that once the quality matches, that which is sold there, then I see no reason why local producers cannot access that lucrative market,” he said. 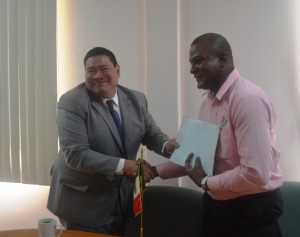 The Mexican Ambassador has just returned from a trip home during which he facilitated the fast tracking of paper work with the Panamanian authorities, relative to the next shipment of rice from Guyana to Panama which was today handed over to the Guyana Rice Development Board (GRDB).

“The Mexican Embassy takes very seriously its role as a facilitator, but not only between the Governments of Guyana and Mexico, but also other partnering states as is with the case of Panama in the rice trade,” the Ambassador noted.

Meanwhile, Agriculture Minister, Hon. Noel Holder has welcomed the comments of the Mexican Ambassador, especially as  it relates to the imminent opening up of the rice trade, which will be more lucrative than the paddy deal.

He is reminding local producers that the 150,000 tonne limit gazetted  by the Mexican Government is opened to all paddy producers in the Region on a first come first serve basis. It therefore means, that if Guyanese producers are the first to apply for the entire 150,000 tonnes then it is win-win situation for the industry and Guyana as a whole.

It should be noted that producers are allowed to apply for three tranches of 10,000 tonnes each. The first contract signed allows for a total of 60,000 tonnes to be shipped. Of this amount, a ship carrying 17,000 tonnes has already left for Mexico. Shipments of paddy will continue to Mexico for the rest of the year.

The start of paddy shipments to Mexico, comes at a time when Guyana’s rice industry recorded paddy production of half a million metric tonnes for the first crop this year. The industry continues to hold strong inspite of the challenges facing rice farmers across the country.