The adverse effect climate change has been posing on the livelihood of the fisheries industry was among the concerns raised by Agriculture Minister, Hon. Noel Holder during Fisherfolk 2017 activities. This year’s event which is being held under the theme,” Climate Change Adaptation to the Fisheries Sector” was held at the Lusignan Community Center Ground.

“Our oceans and aquatic ecosystems are key to regulating our world’s climate, as it is the largest natural carbon sink. However, the ocean is currently absorbing carbon at an alarming rate, and the result leads to its acidification, which in turn transform the aquatic ecosystem,” he said. 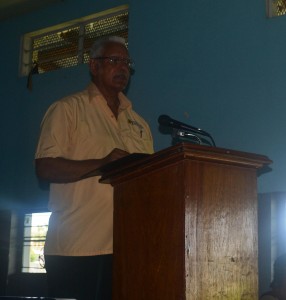 This, according to the Agriculture Minister can have a negative impact on the industry and echoed a called for all the players to work together in the best interest of the industry.

By 2050, the Food and Agriculture Organization (FAO) estimates the catch of main fish species to decline by some 40 percent.

“As a result, the fisheries sector can be impacted by a decline in the production and ecology of our fish stock which will negatively affect production and yield,” the Minister stated.

To address this, the Fisheries Department is currently looking for the introduction of a new line of fingerlings which can withstand the projected changes in local waters. Once successful, this will be a significant boost to the fishing industry.

The Minister proposed a number of measures which can be implemented working in tandem with the local fishing industry. Among those are:-

“These are some of the initiatives we will be embarking to ensure that not only are there more responsible fishing but also guarantee that marine resources will accessible for a long time,” the Minister added. 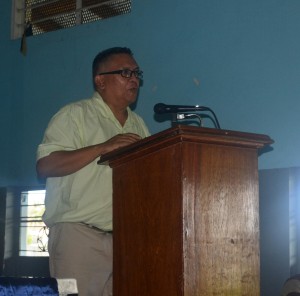 The issue of licensing of vessels was also addressed by Chief Fisheries Officer, Mr. Denzil Roberts who reminded the gathering of not only its importance, but the fact that fishing license will be denied of trawlers are not also equipped with Vessel Monitoring Systems (VMS)

Guyana has recently signed onto the IUU by taking a global response to eliminating illegal fishing. This has seen a number of measures being taken by the Fisheries Department in ensuring that illegal fishing becomes a thing of the past.

The Agriculture Minister spoke of the Port State Measure Agreement (PSMA) to prevent, deter and eliminate Illegal, Unreported and Unregulated Fishing of which Guyana has recently become a signatory.

Persons in attendance at the Fisherfolk activities