Many communities in Region 6 have been hit by flooding due to continuous rainfall over the past few weeks. More recently, over 8 inches of water accumulated on lands along the Corentyne Coast due to continuous rains and the current drainage system’s inability to remove the quantity of water at the rate required to reduce flooding.

During a recent outreach to Region 6 by Agriculture Minister, Noel Holder, it was revealed that many areas were experiencing extreme flooding. Minister Holder and his team visited D. Arjoon’s Poultry Farm which is owned by Mr. Dheonarine Arjoon. Mr. Arjoon’s farm is the second largest poultry farm in the region and with over 400 employees and close to one million chickens being reared it is one of the largest poultry farms in the country.  He expressed concerns about the flooding adding that he is now resorting to transferring chicken from pens because of the flooding.

“As it is now, me have to move all them chicken this from them pen. Water getting higher everytime de rain fall and them chicken cyan stay in d water. Them nuh ga immune system. Mister Minister, me pleading with you…leh we get some help in hay. Rain fall and de estate operators dem ah wok but we need de pump to be working to reduce de flooding.” Mr. Arjoon said

Chief Executive Officer of the National Drainage and Irrigation Authority (NDIA), Mr. Fredrick Flatts during a meeting after the farm visit indicated that steps are being taken to relieve the flooding.

“In addition to the rains, the fact that the pump No.1 Pump in the Albion Estate area is currently down is a major contributor to the flooding. GuySuCo’s engineers are currently working to have this pump up and running. NDIA is also working along with GuySuCo to repair the pump. I’ve just given approval for the necessary equipment to be brought temporarily from Georgetown while the GuySuCo engineers work to repair the burnt motor of the pump. The repairs are expected to be completed within the next ten days. We cannot afford to wait for ten days so we will be bringing the part up immediately and get the pump working.” Mr. Flatts said.

Agriculture Minister, Noel Holder expressed dissatisfaction with the level of flooding in the area, adding that he will leave no stone unturned to ensure the situation is improved as soon as possible. 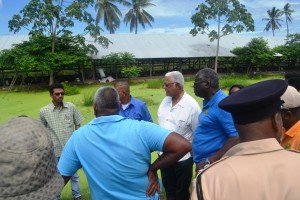 Minister Holder and other officials while visiting Arjoon’s poultry farm

“I am truly hurt by what I’ve seen today. The amount of flooding in the area is unacceptable. The coast is not leveled so because you are in a low spot, water running off from neighbouring communities will result in this degree of flooding. I have urged Mr. Flatts and the GuySuCo engineers to get this problem solved as soon as possible. As we speak the equipment needed to get the pump going is being sourced from Georgetown and will be here within the next 24 hours.” Minister Holder said.

Also present at the meeting was the Estate Manager (ag) for the Albion and Rose Hall estates, Mr. Hutton Griffith. He indicated that GuySuCo currently has three pumps down with over 15 inches of rainfall recorded over the past few days. Given GuySuCo’s current financial troubles, it becomes even more challenging when situations like this occur.

Mr. Flatts indicated that a pump with the drainage capacity of 1200 gallons per second is needed to prevent such severe instances of flooding, adding that he will be following up with the Ministry of Finance as it relates to taking precautionary steps for the future.

The Guyana Livestock Development Authority (GLDA) is also working with farmers in the region to ensure that persons who are in need of assistance with livestock, poultry and other small ruminants are given the necessary support. Chief Executive Officer of GLDA, Mr. Nigel Cumberbatch said that a number of field officers have been dispatched to assist farmers should the need arise.

“Our Region 6 staff are on high alert to assist with technical advice. We have also deployed two specialists to the Canje Creek to assist farmers. Additionally, we have three veterinarians and about nine livestock officers currently in the region.” Mr. Cumberbatch said. 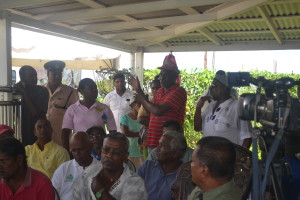 Some of the persons in attendance

Residents also pleaded with the minister to have the access road repaired as it is in a deplorable state that is hampering development in the area. Minister Holder committed to having talks with the Minister of Public Infrastructure to visit the area to see what can be done as it relates to the rehabilitation of the road.