Privatization and Flooding among the issues addressed during Crabwood Creek Outreach

As government continues to make advances towards making sugar in Guyana a profitable sector, Agriculture Minister Noel Holder on Wednesday conducted an outreach to Crabwood Creek, Region Six to shed some light on government’s plans to revamp the industry. During a meeting, which was held at the Crabwood Creek Primary School, Minister Holder set the record straight on a number of issues including government’s plans to privatize the Skeldon factory.

“Privatization is going to save the operations at the Skeldon estate. We have big companies that have expressed interest in utilizing the assets established at Skeldon. The government is prepared to facilitate this through lease agreements. These companies will need workers so we are urging you not to become influenced by political forces. Come on board as everyone stands to benefit from such a move.” Minister Holder said.

Government remains committed to ensuring that the industry reegains a profitable status and continues to reassure citizens that the government is not turning its back on the industry. Minister Holder indicated that the companies that will be carrying out operations at Skeldon as a result of privatization will have to be producing commodities that earn foreign exchange.

With the successes of the first crop harvested for 2017, General Manager (ag) of the Guyana Rice Development Board (GRDB), Allison Peters also reassured persons that rice industry is progressing despite minor issues with markets. 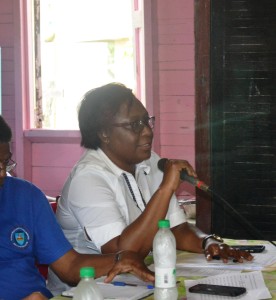 “We are currently exporting to 35 countries. As it relates to the Mexican market, we have moved closer to penetrating this lucrative market as shipment to this market is due shortly. Rice is still being shipped to Venezuela but not under the Petro-Carbie agreement. What I want you to understand is, while we are continuously seeking markets, we have to secure payments for our exporters and for you the farmers.” Ms. Peters said.

Minister Holder then revealed that Guyana is currently expanding its Panama market and is actively pursuing the Cuban Rice market.

The Coconut and Plantain Industries

As farmers posed questions about the expansion of the coconut industry and instances of Black Sigatoka infestation in plantain, Chief Executive Officer of the National Agriculture Research and Extension Institute (NAREI), Dr. Oudho Homenauth indicated that the authority is aggressively working to combat and eventually eliminate Black Sigatoka. 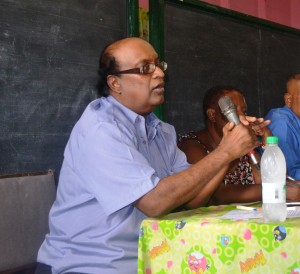 “The fight against Black Sigatoka continues. We have come a far way as instances of this disease have reduced significantly.  NAREI is currently exploring varieties that are resistant to Black Sigatoka. I’d encourage anyone to get involved in plantain cultivation as markets for this commodity will not be an issue. In relation to the coconut industry, we have many plans that will be revealed soon. I would like to mention that in order to maximize coconut production, special emphasis should be placed on the methods used from the inception of planting to the production stage. One such method is the control of pests and diseases. The coconut palm is subjected to various attack of pests and diseases including Red Palm mite. CARDI has recently approved a proposal for an Integrated Pest Management (IPM) Strategy to increase the level of productivity in Guyana’s coconut industry. These works are expected to commence in July.” Dr. Homenauth said.

Flooding in the region

During the meeting, it was also revealed that actions are being taken to combat flooding in the region as many areas are flooded due to continuous rainfall. Chief Executive Officer of the National Drainage and Irrigation Authority (NDIA), Fredrick Flatts indicated that the authority is striving to ensure that all of the drainage structures are operable while noting the constant rainfall over the past few days.

“As a result of heavy rainfall, there has been much flooding in the region. The drainage system currently has the ability to drain 1 ½ inches of water in 24 hours. However, over 8 inches of water has accumulated over the past few days in certain communities due to continuous rainfall. It is not an easy task to move pumps around as there is flooding in many parts of the country. What we are striving to do is to ensure that all our structures are operable but having continuous rainfall is not helping.” Mr. Flatts said.

Minister Holder while expressing that mitigation is needed to relieve flooding issues, revealed that 14 pumps are expected to arrive from India that have enhanced drainage capacities.

Mr. Flatts, while addressing Water Users’ Association issues disclosed that since the area was established, there have been three sluices constructed to facilitate irrigation in the area. One sluice was closed off due to it not being utilized at the time. With more lands being made available for agricultural practices, the two remaining sluices are no longer sufficient to irrigate the lands. He further indicated that the anticipated Black Bush Polder Water User’s Election for that area is going to take place in the near future.

Farmers expressed concerns about the limited work carried out by authorities in farming areas between Crabwood Creek and Moleson Creek as it relates to irrigation matters. Minister Holder committed to taking steps to correct this by having the area officially declared a production area. 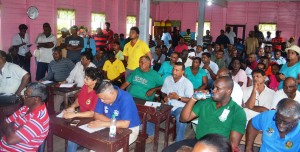 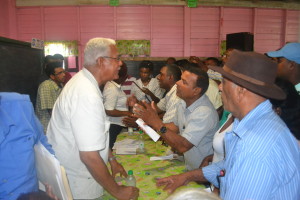 Minister Holder while interacting with farmers and residents of Crabwood Creek