Customs officers while clearing a loaded ship at the Guyana National Shipping Corporation (GNSC) wharf at Port Georgetown on Tuesday afternoon discovered that an illegally imported horse was on board. Officials of the Guyana Livestock and Development Authority (GLDA) were notified and immediate action was taken.

The authority carried out preliminary investigations at the wharf about where the animal came and found that the condition in which the animal was being kept was unfavourable and did not guarantee the animal’s health.

Deputy Chief Executive Officer of the GLDA, Dr. Dwight Walrond in an invited comment told the Department of Public Information/Government Information Agency (DPI/GINA) that a few years ago, the Laws of Guyana declared that the importation of horses without the necessary requirements is illegal. Hence the horse was impounded by the authority. 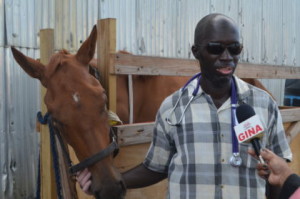 Dr. Walrond explained that, “Over the years, in 2013 and 2014 we had some incidences where we had a number of animals being imported from Trinidad illegally, because of that we would have basically … say it is now illegal to bring horses from Trinidad by boat or animal leaving Trinidad without being micro-chipped or reaching the requirements of Guyana meaning all the vaccinations and so on.”

The animal is now being kept at GLDA’s quarantine station at Timehri where veterinarians will carry out a number of tests to know whether the animal’s health is up to requisite standards. Thereafter, the horse will be handed over to the Guyana Police Force which will be taking the necessary action against the importer.

“Once we are through, this animal would be given over to the police, we wouldn’t be doing an auction or the owner would not be getting this animal because it was imported illegally. The police have already been informed, they’re going to be dealing with the importer of this animal. I would have spoken to that importer on numerous occasions pleading to her, she was trying plead to us that we should give a waiver on the import requirements but I cannot do that.” Dr. Walrond explained

Dr. Walrond highlighted some of the requirements for the importation of horses into Guyana by specifically pointing out that, “for an animal, a horse specifically, to be imported from Trinidad they must be micro-chipped, a copy of the birth certificate has to be submitted to the GLDA… Secondly with respect to disease, they must be vaccinated against EE, glanders and must be free of African Swine Sickness and other infectious diseases…they must be dewormed and treated for internal parasites.” 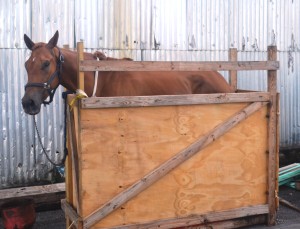 The horse was shipped in this crate that was deemed unacceptable for housing the animal.

Initial examinations carried out on the animal shows that it is approximately four years old. The horse is a castrated male and observations prove that the conditions in which the horse was kept while being transported to Guyana was substandard, revealing that the horse was not being taken care of.

Dr. Walrond explained that between the decades of 1980 and 1990 there was an outbreak of Equine encephalomyelitis, commonly known as EE, after a set of horses were imported from Trinidad. This led to relevant authorities implementing stringent laws which would protect against future occurrences of such an outbreak.

Equine encephalomyelitis, also called “sleeping sickness,” is an infectious disease that affects the brain of the horse. Three strains have been identified: Eastern, Western, and Venezuelan. The mortality of the three strains runs from moderate to high. The Eastern strain occurs more frequently and has the highest mortality rate.

Dr. Walrond pointed out that first time importers are subjected to an interview with the authority so as to be familiarised with the necessary requirements for the importation process.

“If you are a first time importer you would be subjected to an interview. Why? It’s not that we are discriminating but what we found is that a lot of these importers they don’t know the requirements as it relates to GRA, they think when they pay GLDA for the import permit that’s it.”