The Purpose of the meeting was to educate government media on the importance of disseminating precise weather and climate information to the public.

The meeting with the media is part of a series of meetings being held in St. Vincent and the Grenadines by the CIMH. The CIMH is hosting the Caribbean Climate Outlook Forum wet season (CARICOF) 2017. 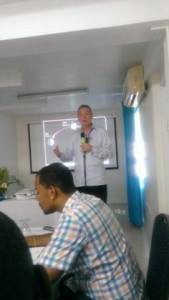 While making an official statement before the commencement of the media meeting, St. Vincent and the Grenadines Minister of Agriculture, Forestry, Fisheries and Rural Development, Sabota Caesar highlighted and used the example of having the media equipped to be able to share weather and climate information.

“The training session is therefore critical. It will improve communication skills, and make weather and climate message transmission clearer.”

The Minister used the example of a recent hurricane which had occurred in the country. He said this severe hurricane has resulted in more than 90 percent of the country’s major agriculture crop being lost or damaged.

Caesar added that this contributed to a decreased Gross Domestic Product (GDP). “The discussion that will be had here, there is probably not a more important discussion…persons benefitting from this discussion are not in this room.” He said that in order to prevent losses from another major natural disaster the media should able to reliably inform the citizenry so that they can be prepared for what is to come.

The specialization of meteorology reporting was also emphasized. Also, throughout the Caribbean, there is hardly any focus placed on weather and climate reports. This does not allow for adequate circulation of weather advisories and warning and the entire population may not be reached in time to be prepared for an upcoming change in the weather pattern. 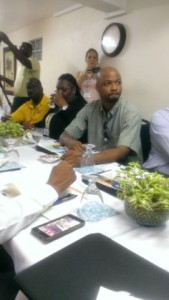 Some of the state media representatives from Caribbean countries, participating in the media meeting

Moreover, meteorologists lobbied for more airtime of weather and climate forecasts which they said would essentially ‘save lives’. Additionally, the use of social media platforms must be adopted since the use of television, radio and print media is fleeting.

During the media meeting, participants were first familiarised on meteorology and climate. They were encouraged to reach out to the various meteorology services within their respective countries to obtain updated information.

Facilitators of the media meeting were John Toohey-Morales of the NBC News 6, United States of America and Irene Sans WFTV Orlando, Florida both representing the CLIMADATA Corporation.

The presenters focused their presentations on the evolution of weather and climate communications in the Caribbean and how it can be improved.

Towards improving and creating a strong journalist-Meteorology relation in the Caribbean the two disciplines must not be looked at as an “eight to four job,” Sans said.

“Reporting on the weather is more of a 24-hour job, because it is always changing, it is always happening but this is a challenge,” Sans noted.

Some countries had to learn from its shortcomings in this regard. Morales used the example of Puerto Rico. He pointed out that two major hurricanes in 1985 and 1989 struck the country, resulting in mortalities and damaging livelihoods.

With a more robust media service functioning within the Caribbean, governments can be better poised to sustain the livelihoods of the population while putting measures in place to preserve economic activity.

The CARICOF will officially be launched on Wednesday, May 31 at the Beachcomber Hotel, where the Prime Minister of St. Vincent and the Grenadines, Dr.Ralph Gonsalves will address the meteorologists and Caribbean media representatives.

Among topics for discussion during the CARICOF sessions are the exceedance forecasts and sectoral Early Warning Information Systems Across Climate Timescales (EWISACTS).