Guyana is positioning the agriculture sector to break barriers in the area of gender equality. The Caribbean Disaster Emergency Risk Management Agency (CDEMA) is currently hosting a three day regional training workshop for Integrated Gender Equality in Disaster Risk Management (DRM) Programming in the Caribbean that will conclude on Friday. The aim of the workshop is to give participants a clear idea on how to conduct a gender analysis and better integrate gender equality in all future interventions and national programmes and policies.

A section of the participants at the workshop

The workshop is being hosted in collaboration with the United Nation’s Food and Agriculture Organization (FAO) and the Ministry of Agriculture to ensure equal opportunities among men and women in agriculture.

At the opening ceremony for the workshop which was held at the Grand Coastal International Hotel, Ms. Dhanraji Madray, Assistant Administration of FAO Guyana in offering remarks, indicated that the barriers to women’s access to information can, to some extent, impair them. 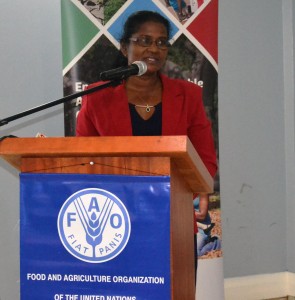 “The Caribbean region is very vulnerable and at high risk of natural and man-made disasters. The disaster risk reduction community recognizes that gender equality is fundamental to increase resilience to disasters. Interventions that promote more equitable gender relations, by transforming gender roles, improving women’s position and challenging power imbalances between men and women are considered essential in building the resilience to disasters.” Ms. Madray said.

CDEMA’s Comprehensive Disaster Management (CDM) started in 2001 with emphasis being placed on addressing all hazards and empowering all sectors while building a regional culture of safety. The mainstreaming of disaster risk management at the sectoral level has been characterized as one of the priority outcome areas of the regional CDM strategy which is scheduled to be completed by 2024. 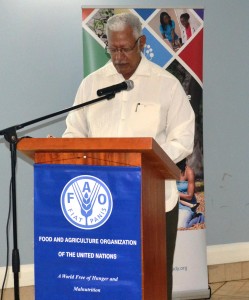 Agriculture Minister, Noel Holder in delivering the feature address pointed to the fact that the need for a multi-sectoral and multidimensional approach cannot be ignored.

“The way in which we approach these mechanisms for combating the effects of climate change, and by extension increasing our capacity for disaster risk management, should be within a holistic framework. We cannot neglect the need for multi-sectoral and multidimensional approaches. Today’s event, among others, indicates the willingness and efforts of the Region to foster and sustain such a holistic framework.” Minister Holder said.

The subject minister spoke of government’s commitment to ensuring the overall protection of livelihoods, social capital and food and nutrition security and has thus indicated support to the implementation of the Disaster Risk Management Plan for the Agricultural Sector.

Guyana has taken a number of steps to address climate change and disaster risk management and has moved towards the integration of these initiatives and their positioning within its national agenda. 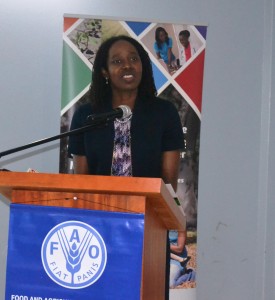 Deputy Executive Director of CDEMA, Ms Elizabeth Riley indicated that her organization deepened their agricultural involvement is 2007 with the aim of involving all groups of persons.

“In 2007, we deepened our engagement with targeted sector partners including agriculture. We agreed on a medium to long term vision of sector led mainstreaming of disaster risk management with CDEMA playing a facilitating or supporting role. According to the Caribbean Development Bank’s Country Gender Assessment Synthesis Report 2016, the agricultural sector remains highly sex segregated with men dominating land ownership, access to credit and other means of production. Since then (2007) there have been significant steps forward in addressing disaster risk management in the Agricultural sector.” Ms. Riley said.

Representatives from Guyana and other countries from across the region like Jamaica, Barbados, St. Kitts, Suriname, Dominica and Trinidad and Tobago will engage in several brain teasing discussions on understanding the concepts of gender and disaster risk management, applying gender responsive disaster risk management and climate change adaption priority concepts in agriculture, gender and agriculture in the region and integrating gender in livelihood resilience programming.

The Ministry of Agriculture has intensified its focus on initiatives which are geared to combat the effects of climate change and promote preparedness, response and resilience within our population.

Minister Holder is with the representatives of the Ministry of Agriculture, FAO, CDEMA and participants of the workshop

Minister Holder also expounded on government’s support for such initiatives, signifying the move towards the integration of these initiatives and the positioning of Guyana’s national agenda to address climate resilience in keeping with the sustainable development goals, especially in areas of adaptation and mitigation.

“We have been guided in many areas by our Disaster Risk Management Plan for the Agriculture Sector which seeks to achieve sustained economic and social prosperity through improved agriculture risk reduction and disaster risk management and outlines detailed activities and expected achievements within four results areas; namely:  Strengthening institutional and technical capacities within the agriculture sector, Risk identification, information systems and early warning; building resilience for sustainable livelihoods in the agriculture sector, and Preparedness, Response and Rehabilitation.” Minister Holder explained.

In 2013, the Ministry of Agriculture developed a five year disaster risk management plan for the sector that seeks to strengthen capacities and operating frameworks within the agriculture sector to prevent and mitigate the impacts of disasters, while promoting efficient and effective restoration of livelihoods through well-coordinated mechanisms and articulate a sustainable mechanism for integrated financial resource mobilization that facilitates ongoing implementation of DRM activities.