Baracara- a small community located miles up the Canjie River is involved in both cash crop and livestock production. However, the community’s production in recent times has been challenged lack of financing and adequate marketing of their production.

On Thursday, Agriculture Minister, Hon, Noel Holder led a delegation on an outreach exercise to the community to address some of the issues which have been affecting their livelihoods. The residents who expressed great appreciation for the visit raised a number of issues.

Among those are- lack of financing and markets for their produce, drainage and irrigation inefficiency, the requirement for breeding bulls to improve the genetic pool, soil analysis to determine soil problems and fertilizer requirements. 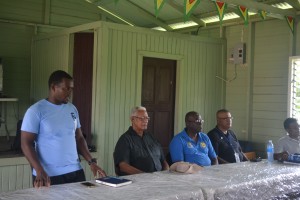 Chairman of the community, Mr. Glenton LaFleur, spoke of the pest and diseases which affect their production adding that while this has contributed negatively in some way, the problem with soil deficiencies could be the major problem.

“We have over the years been a major supplier of cash crops to the nation, however, this has been on the decline in recent times due to a lack of access to market,” he said

Chief Executive Officer of the National Agricultural Research and Extension Institute (NAREI) Dr. Oudho Homenauth in addressing the issue of pests and diseases, committed to assisting the community with fertilizers and chemicals to address the problems. With respect to soil deficiencies and marketing, a team of extension officers and officials from the Guyana Marketing Corporation (GMC) will be in the community shortly to work with farmers in their regard.

General Manager of the New Guyana Marketing Corporation, Mrs. Ida Sealey- Adams explained to the residents ways in which they can not only tap into local markets through the support of her organization but also ways in which GMC’s marketing experts can assist in value-added production.

According to Mrs. Sealey-Adams, oftentimes there is a glut of produce on the market, leading to the low price being offered for agricultural produce. While this can be a major deter, farmers now have options to do value-added production which is now the ‘new thing’ in Agriculture. The concept of contract farming between purchasers such as the GMC and suppliers featured prominently in the general discussion.

“You mentioned the glut of tomatoes for example. We can assist you in making of tomato pulp for tomato paste. These are all options you as a community can venture into to boost your livelihood,” the General Manager said.

On the issue of depleting of the genetic base of cattle, Chief Executive Officer, Guyana Livestock Development Authority, Mr. Nigel Cumberbadge explained to the farmers ways in which the authority can assist in not only having them access quality breed’s of bulls at a reduced cost, but look at the possibility of Artificial Insemination (AI). The GLDA presently has a successful AI program ongoing and has been offering the services to farmers across the country. In 2016, the authority successfully completed 2028 AI as opposed to 2105 in 2015. For the first quarter of this year, 819 were successful done.

The issue of drainage and irrigation received much support from Chief Executive Officer, National Drainage and Irrigation Authority Mr. Fredrick Flatt, who will be sending a team of engineers on Tuesday into the community to address their irrigation and drainage woes.

According to Mr. Flatts, the community, which has access to abundant lands, can be even more productive with the development of proper drainage and irrigation structures.

Agriculture Minister, Hon, Noel Holder underscoring the importance of agriculture, stated that while Government has been taking an interest in all sectors, agriculture continues to be given priority due to its importance to the national GDP.

He added that oftentimes farmers who live in far-flung communities are at a disadvantage when accessing services.

“You are the ones first to be at a disadvantage. However, my team and I have embarked on a number of outreaches to address farmers issues countrywide. The sustenance and improvement in your livelihood is important and through the respective agencies and departments within the Ministry of Agriculture we will be looking at ways in which we can assist you,” Minister Holder said. 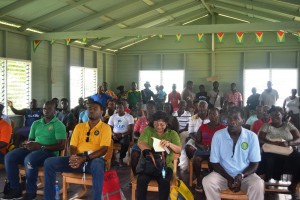 Another issue which took center stage is forestry leases.  According to the residents, lands which were earmarked by Forestry Commission a few years ago on their respective leases will now have to be changed.

According to Mr. Claude Hinds, after occupying his lease for over five years as designated by the Guyana Forestry Commission (GFC), he is now being told his land doesn’t exist on the GFC’s GPS Satellite database.

Minister holder told the gathering that while the Forestry Commission didn’t fall under the remit of the Agriculture Ministry, he will raise the issue with the subject Minister. 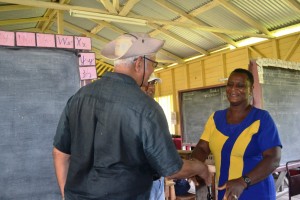 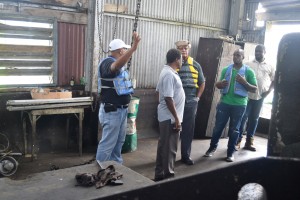 Minister Holder and other officials while visiting a pump station at No. 66 Village during the outreach 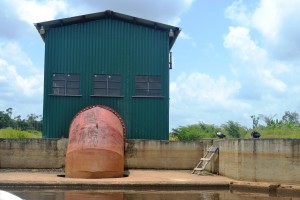 Pump Station at No. 66 Village